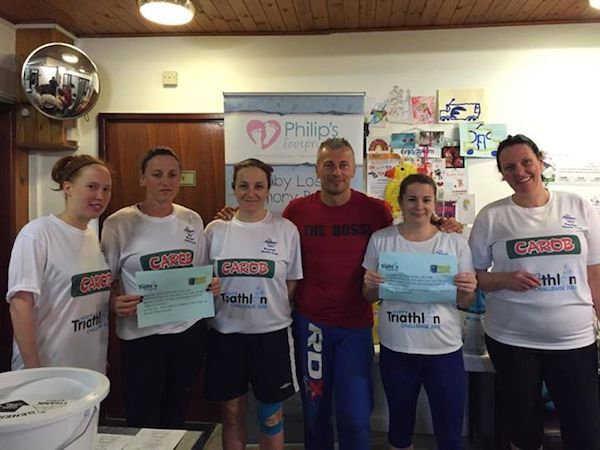 A local woman is celebrating a big birthday this year by helping other women and their families.

Nicky Holgate-Smith has a bucket list of challenges to get through before she turns 40 in December to raise money for Islanders affected by the loss of a baby.

Nicky said: “I became inspired by Jo Nash who founded Philip's Footprints when, Jo’s amazing work was recognized last year when she won most Inspiring Woman in Jersey and rightly so. I then hit upon the idea of completing a year of bucket list challenges as I turn the big 40th this year.

“I thought that I could either celebrate or commiserate the fact. In the end I have chosen to embrace the fact I’m turning 40 and felt I could do something positive to help others and so decided to raise funds for Philip's Footprints.”

Nicky has already conquered her fear of heights and burning things – having abseiled down Mont Orgueil Castle last month and baked cakes for a big cake sale.

While the rest of us were busy eating Easter eggs at the weekend, she was completing a 24-hour triathlon with some of her netball club teammates at the Mayfair Hotel and has already raised more than a quarter of her £5,000 target.

Nicky said: “It was the netball girls versus the football girls in teams of three, we had one hour in the swimming pool, then the bike for an hour, then the treadmill.

“It was a fantastic day, we had really good support. From 2pm on Sunday, it started to drag, everyone was feeling at their lowest, and from 4pm until 7pm I was on my own – dressed as superwoman!”

This summer she’ll face her fear of creepy crawlies and snakes when she attempts an “I’m a celebrity, get me out of here” type challenge at Durrell in June.

Nicky and her netball team will be back together in July as they attempt to beat a world record with a 12-hour netball-athon, then she's got a Moonlight walk in August, a sponsored roller blade in September and the Marathon Relay challenge in October.

Nicky said: “My motto is strength doesn’t come from what you can do – it comes form overcoming the things you once thought you couldn’t.”

After a busy year, Nicky says she plans to celebrate her fortieth with her husband relaxing on a beach in Mexico!

You can support Nicky’s cause here.

READER LETTER: “I wish all the team at the Mayfair a fond farewell”