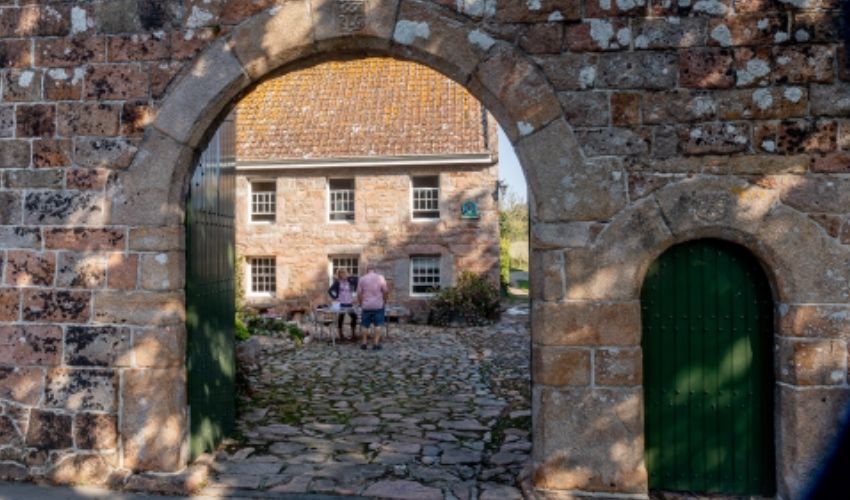 Plans to create a bed-and-breakfast and glamping campsite at Morel Farm in St. Lawrence are being fiercely opposed by a group of Islanders, including nearby residents.

The National Trust, which owns the 16/17th century property, has secured £2.16m of Fiscal Stimulus money to “develop the farm to provide a bed and breakfast facility, glamping space and other tourist facilities.”

Because the investment is designed to be “timely, temporary and targeted”, projects have to be completed by the end of this year, unless an extension has been granted.

Six have been given extensions to March next year but Morel Farm is not one of them.

Planning permission has been granted, although a further application is being made for the glamping site.

However, a group of people, including former St. Lawrence Constable Geoffrey Fisher, claims that there is “very strong opposition to the trust’s proposals” which, they say, if carried through, “will destroy the very qualities which make this local farmstead unique”.

The opponents are proposing a motion at tomorrow’s annual general meeting of the National Trust for Jersey, calling for the plans to be shelved.

The motion, which is proposed by Stanley Cohen, and seconded by Catherine Anson and Mr Fisher, says: “The proposals for Morel Farm involve the irrevocable destruction of the heritage qualities and original use of its unique character as a 16th century Jersey farmhouse and smallholding.

“It is completely hypocritical of the Trust to make these proposals now, which if made by any private citizen would be strenuously opposed by the Trust as destructive of the island’s heritage.

“Further, to advocate and approve the use of good farming land to a glamping campsite would not only deprive a Jersey farmer of home and living unit, but also would destroy the very rural nature of this unique area.”

The opponents argue that the National Trust’s plans goes against its stated main objective to “permanently preserve and safeguard places of historic interest and natural beauty for the benefit of the Island”.

The motion adds: “These proposals should and probably would alert every future donor that heritage properties they may give to the Trust in the future to be preserved in perpetuity for their unique heritage qualities for the benefit of the island may be turned into bedsits or other commercial use in direct contravention of the stated objects of the Trust charter.

The motion will be presented at tomorrow’s AGM at 18:00 at La Mare Wine Estate.

Unsurprisingly, it is being opposed by the Trust. In its official response to the motion, the organisation says: “The proposals for Morel Farm entail the refurbishment and repair of the main house, conversion of the bakehouse to self-catering accommodation and repairs to the roofs of the ‘Chapel’ and modern tractor shed.

“These are in accordance with existing planning consents which were granted on 31 July 2012 and renewed on 28 September 2017.

“The Historic Environment Team considered the works to be totally in accordance with Policy HE1 of the Island Plan which has a presumption in favour of the preservation of the architectural and historic character and integrity of listed buildings.

​“Neither Mr Cohen nor his seconders raised any objections to the application on either occasion, despite living in relative close proximity to Morel Farm.”

It also argues that the Trust has other self-catering accommodation elsewhere and denies that it is going against its own constitution.

Posted by Steven Simon on Sep 23rd, 2021
Typical the Trust are very good at objecting to other people’s plans, but when it comes to themselves they don’t seem to mind so much. Strange?
Posted by neil faudemer on Sep 24th, 2021
Completely agree with Geoffrey Fisher this project is inappropriate in its proposed format and extremely disappointing that it has even been put forward..Morel Farm should not be turned into a campsite.
To place a comment please login Login »

MAYDAY! The Morris Men need you!