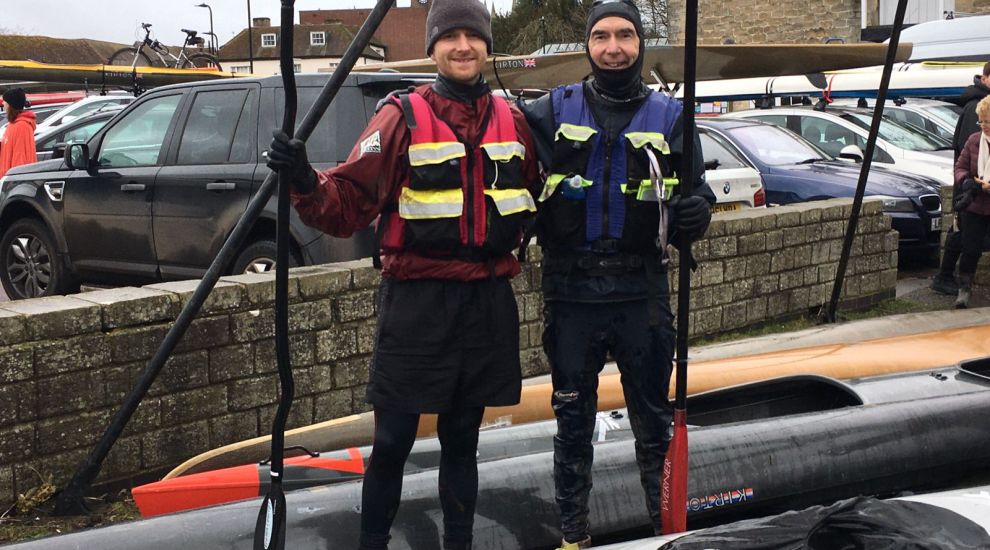 ...And they're off! A Jersey father and son are this weekend taking on a gruelling canoe marathon race to raise money for a local charity offering therapeutic arts workshops to vulnerable people.

Richard and Alex Haine are competing in the Devizes to Westminster International Canoe Race over the Easter weekend, finishing on Monday 18 April.

The DW, as the race is commonly known, is an annual event and established contest in the world canoeing calendar.

Competitors start their journey in Devizes, a town in Wiltshire and finish in central London.

This year, the competition covers over 100 miles and includes 77 'portages' where competitors in their canoe kayaks leave the water and carry their vessels to the next water stage.

"We were thrilled when the confirmation of the acceptance of our entry came through on 7 March 7, together with our allocated boat number - 604," Richard said ahead of the race.

For the competition, Richard and Alex have chosen to support local charity, Kairos Arts.

Kairos Arts work particularly with women and children, those recovering from trauma, domestic violence, trafficking and abuse, those living with dementia and young people suffering from mental health.

Cathy Sara, Creative Director for Kairos Arts, says they are thrilled that the charity is Richard and Alex’s choice for fundraising.

"We are overwhelmed by the generosity that Richard and Alex are showing by undertaking such a difficult challenge for Kairos.

"It is so appropriate that Richard and Alex, who will need not just physical but also mental and emotional stamina to undertake and complete the DW challenge, are raising funds for and raising awareness about the effects of trauma and adverse mental health on people here in Jersey.

"We are so grateful to all those who have recently gifted or raised funds for us. You are helping us to grow our work sustainably here in Jersey. Thank you," Cathy said.

Richard had a long-held ambition to take on the DW and started talking to Alex about it when his son was a teenager, but the "busyness of life got in the way".

Alex had not forgotten, however.

Richard explained: "When my birthday came around in the October before the pandemic started, I received an interesting letter purporting to be from the Devices to Westminster Organising Committee offering me a 'wild card' entry and informing me that my son Alex had agreed to partner me in the event. Such was the authenticity of the letter that I didn't immediately realise that it was in fact a very elaborate hoax from Alex himself!

"And so, the die was cast. Little did we know at the time how long it would take to get to this point. Having discussed it with Alex, we felt that we would really like to raise funds for a worthwhile cause and having discovered the work carried out by Kairos Arts through a good family friend, we decided that this just had to be our chosen charity."

Alex turned 30 the day before he and his Dad took on the challenge – and, as Richard explained, they’ve already had a taste of what’s in store as they have completed challenges to qualify for the marathon canoe race.

"Having cancelled the last two events due to the pandemic, it was sometime before the DW organisation confirmed that it would be going ahead this year, over Good Friday and the Easter weekend, so it is only in the last couple of weeks that Alex and I have been able to go through the necessary ‘hoops’ in order to satisfy the entry requirements and gain a place in this event.

"As part of this process, we spent a couple of days on the Kennet and Avon Canal undertaking some practice and then taking part in an organised preliminary event of 13 miles. This included over 20 portages - running with the kayak around locks and low swing bridges." 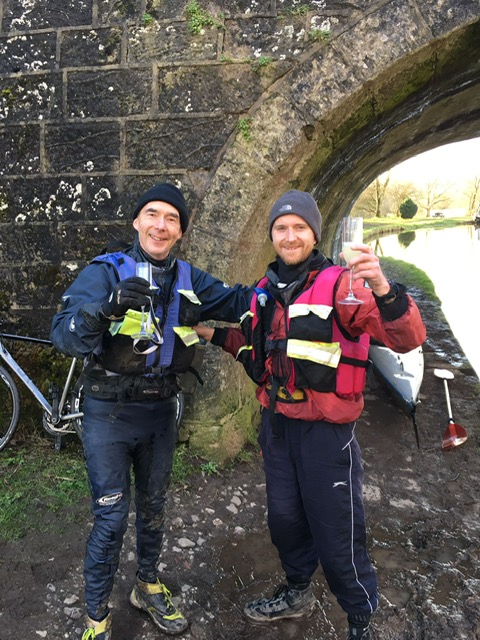 Pictured: Richard and Alex Haine celebrating after achieving a qualifying distance of over 30 miles in under 8 hours along the Lancaster canal.

"The final two hurdles required for the race entry were to attain the qualifying standard of 30 miles-plus on open water in a time of under eight hours, which we achieved on the Lancaster Canal, and then, (the nail-biting bit!), when we put in our entry online, together with evidence of standard attainment in the form of a GPS record, and sat back and waited to see if we had been given a place."

Richard did most of his training in his garden in Jersey, trying to be creative as there are no canals or rivers on the island where he could practice.

Alex, meanwhile, trained in Lancaster where he lives.

The pair have so far managed to make £605 of their £1,000 fundraising target for Kairos, and hope to hit the big figure over the weekend.

They have also been supported by the local community in other ways, as Richard explained: "The customised building of the boat specially for the event has been generously sponsored by Romerils, without whom it would not have been possible to enter for this event and it would have just remained a dream."

The specially made canoe proudly displays 'Kairos Arts' at the front.

Kairos Arts will be tracking the father and son duo across the event and sharing their progress on social media.