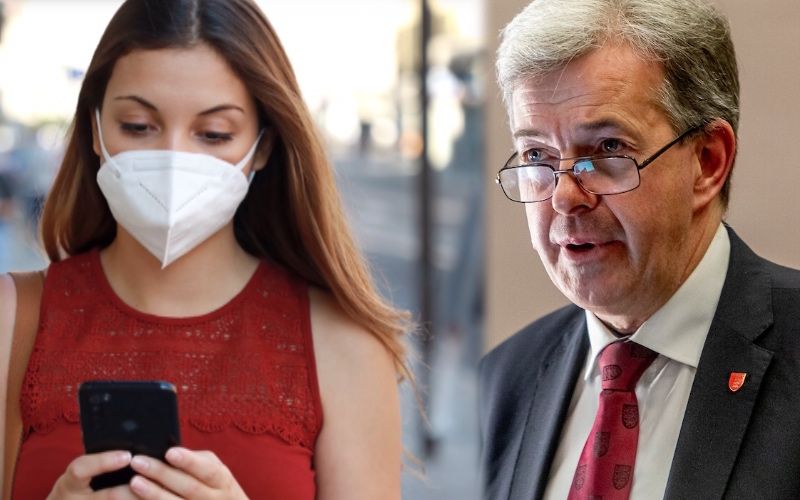 The Chief Minister has stressed that there is no specific number of covid cases that will trigger a lockdown, as the States Assembly is today asked to pass new laws imposing tighter restrictions.

Today, politicians are meeting for a special sitting to vote on giving the Government powers to make mask-wearing compulsory in indoor public spaces.

They will also decide whether to give Ministers the power to enact orders to force gatherings to disperse, to prosecute businesses for not collecting tracing information from customers, and whether the requirement to isolate after travelling to the island should become law.

The debate comes as the number of covid cases in Jersey appears to be stabilising. Over the weekend, Jersey saw a slight fall in the number of cases, from 168 on Thursday to 163 yesterday, with 24 new cases but 29 people recovering.

Since Friday 20 Nov, 29 individuals have recovered and 24 new cases have been identified (2 through inbound travel, 2 through planned workforce screening, 15 through contact tracing, 4 while individuals were seeking healthcare, and 1 through admissions screening). pic.twitter.com/jmS3DSa4dG

Of the 24 new cases, two were inbound passengers, two were picked up during routine workforce screening, 15 through contact tracing, four after seeking healthcare and one through being tested before going into hospital for something else.

Of the 163, cases 71% were symptomatic, 29% were asymptomatic and three are in hospital.

The Government is still hopeful that a lockdown can be avoided if islanders follow its guidelines, which were tightened last week to reduce the number permitted at gatherings, increase the frequency and scope of testing, and tighten licensing laws.

Speaking at a virtual Institute of Directors event yesterday (Monday 23 November), Chief Minister John Le Fondré said that the Government had no lockdown plans and was prepared to accept a low level of covid transmission.

“There is not an elimination strategy,” he said. “It is accepting a low level of transmission through the community and trying to make sure that it doesn’t get out of control.

“Part of the problem is because we had an excellent summer, people have got a little bit complacent but you don’t want a combination of the flu season, which increases hospital admissions anyway, with a covid season, which really runs the risk of overwhelming the health service.”

Asked what would trigger a lockdown, Senator Le Fondré said: “I cannot give you a specific number because it is always dependent on the circumstances of the time. I can’t tell you if, for the sake of argument, cases go above 200, that we will go into shutdown. We would all like certainty in this most uncertain of times.

“There are a range of measures that we take into account. For example, we monitor calls on the helpline to assess potential symptoms, and we keep a record of those. In theory, that gives us a two- to three-week advance warning, so we can see if there is a problem coming down the line.

“There will be signs within the hospital environment and other measures around if we start to see significant clusters coming through.

“The real difficulty is that people expect a number or a level, but we are in the most uncertain of areas and even the science continues to change. We are also trying to predict two to four weeks ahead, when any measures you bring in will have an impact.

Asked why blanket restrictions were needed when there had been no direct fatalities, Senator Le Fondré responded: “Yes, nobody has died from corona virus for a number of months here, but you’ve got to look at what is happening with our neighbours, where people are dying of corona virus. And if you speak to Dr Ivan Muscat, he will say that covid doesn’t care if it’s in Jersey, France or the UK. Just because we have done well up to now, it is still a threat.

“In the UK, people are still dying and there remains the issue of how close have they been to being overwhelmed? That is the fundamental issue we have.

“There is a balance between saving lives and saving livelihoods. We are trying to protect Islanders’ grandparents, but it is not just around death because there are underlying consequences of covid. I spoke to someone who had contracted it in March and they still hadn’t fully recovered from it.

“Most western jurisdictions have said that the fight against coronavirus is worth the cost because you don’t know the consequences of it. Just because you are shielding the vulnerable, it is still percolating through the rest of society, and you don’t know what the ongoing impacts are, and what happens second or third time around.

“You can have the discussion of whether the strategy is right but to date every western jurisdiction has taken the stance that you’re trying to protect society.”

The Chief Minister added that he hoped that most islanders would be vaccinated against covid by next April.

Posted by Alan Keen on Nov 24th, 2020
Poor old Ivan Muscat. Compared to our neigbour Guensey. Jersey has not done very well at all. Failed completely by our short-sighted government.
To place a comment please login Login »