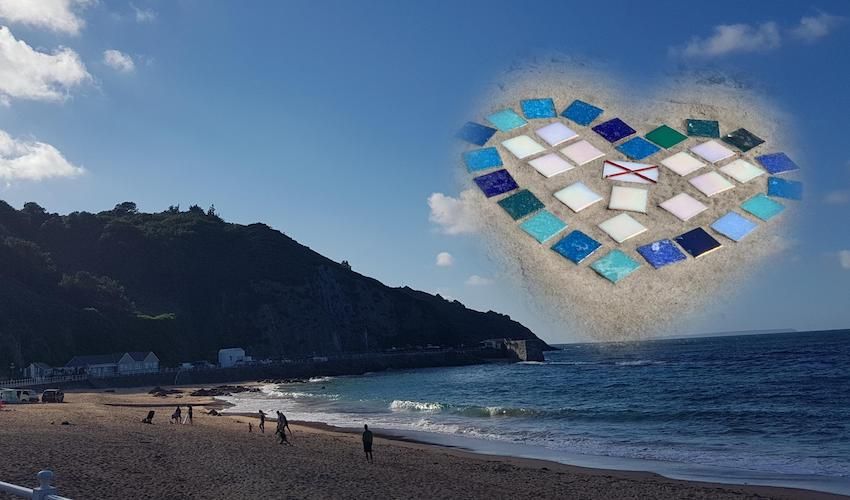 24 vibrant mosaics, which were carefully crafted with glass tiles by over 200 islanders, will be revealed at a local beach today as the tide goes down.

Launched by Ports of Jersey, the project saw community groups from St. Ouen and St. Mary, including schools, pubs and churches, work alongside local artists to create colourful depictions of local landmarks to decorate the concrete stabilising repairs on the Greve de Lecq Pier.

The pier was badly damaged in storms during the winter in 2017 and required a significant amount of concrete repair work. Not only did Ports of Jersey carry out the stabilising work, but they also decided to add a little something to the area to improve the look of the concrete work. 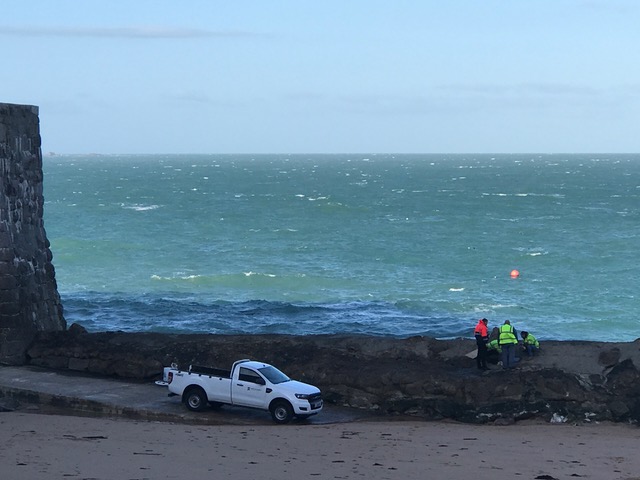 Pictured: Greve de Lecq was repaired in 2018 after being damaged during winter storms in 2017.

To create a unique feature, they decided to call upon local artists to work with the help of the community.

Local artist and teacher Lizi Hill was the first one to get involved.

Known for looking for love in unusual places and creating curvy sculptures, Lizi said she heard about the project through Pat Robson, chairman of the Art in Frame Foundation and Manager of the Harbour Gallery.

Almost immediately, Linda and Glyn Burton - a mosaic expert and glassworker and “man of many talents", according to Lizi - also got involved. 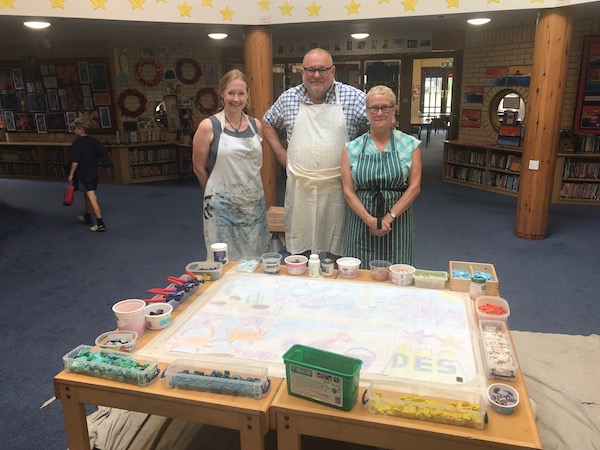 They worked with a number of community groups throughout last summer to create a series of 24 mosaics, each with its own unique design showcasing scenes that represent the beach and surrounding areas.

In total, over 200 islanders were involved, including Les Landes School, where every one of the students got to put a tile on the mosaics, and St. Mary’s Pub where the trio was during the World Cup Final.

Other pubs were involved with staff and clients alike doing their bit, as well as the Sea Scouts, local churches and the RNLI.

Ports of Jersey staff were also involved and designed a mosaic featuring the Duke of Normandy. 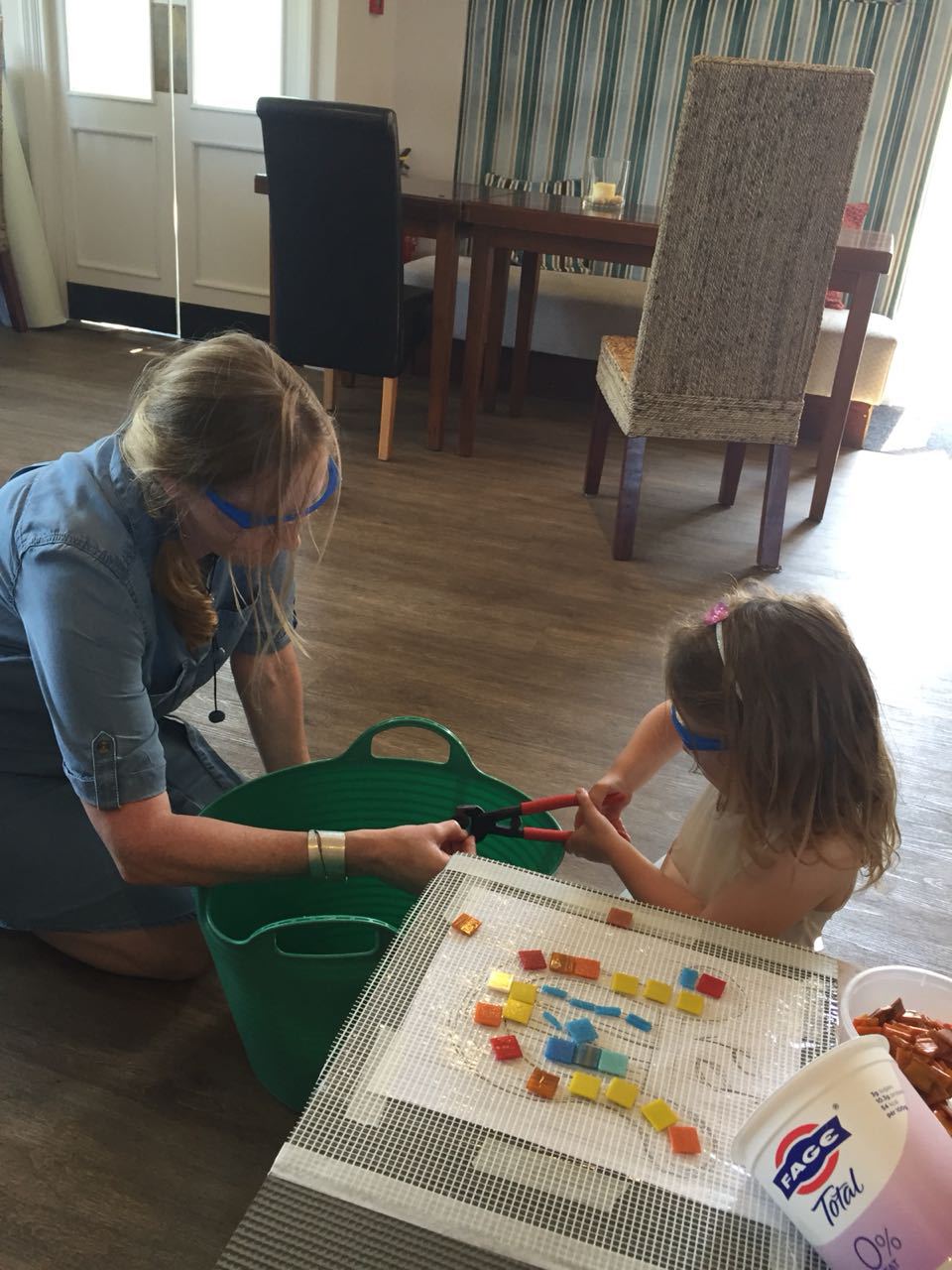 Pictured: Lizi at work with the youngest little helper involved in the project.

The youngest mosaic artist was a three-year-old girl, Lyra, who created a “beautiful heart” with Lizi Hill.

The oldest, meanwhile, was John Syvret, who also helped design his own creation.

“The project included a lot of people that would not normally be involved in art projects,” Linda said. “It was lovely to meet so many people that might not have joined.”

“It was a playful thing to choose colourful tiles to add to the mosaic and to play with the colours and the blocks,” Lizi added. “It was a colourful creative community project.” 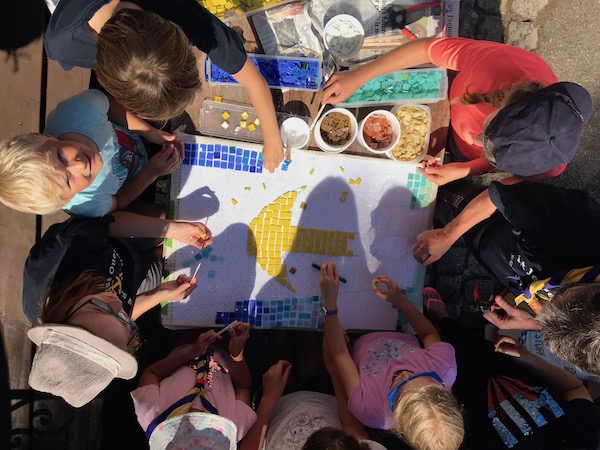 Pictured: Over 200 islanders have been involved in the making of the mosaics.

The mosaics, which will erode naturally over time with the tides, have been created out of environmentally friendly materials, with the tiles themselves made of glass.

“Any art that is under water twice a day will disappear,” explained Lizi.

“Glass is made of sand,” Linda added. “It’s obvious that it will erode. Over time the mosaic will become part of the sand again. It won’t damage the environment." 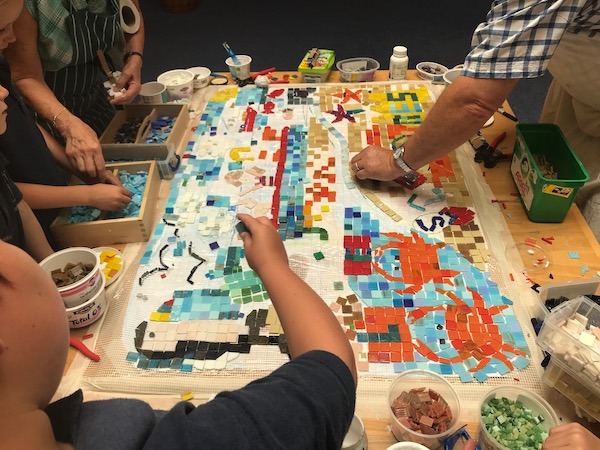 Pictured: Each of the 24 designs showcases scenes that represent the beach and its surrounding areas.

“People in ancient Greece created mosaics that have survived so we may have some time before that happens,” Lizi joked.

“Glass is environment friendly and if it breaks down, it will be like a treasure on a beach to find and collect the pieces.”

Everyone involved in the project is looking forward to the unveiling today at 12:00 where the designs will be revealed as the tide goes out.

“You won’t see all of them all the time,” Lizi added. “You’ll have to walk along the breakwater to see them. It’s discovery art. 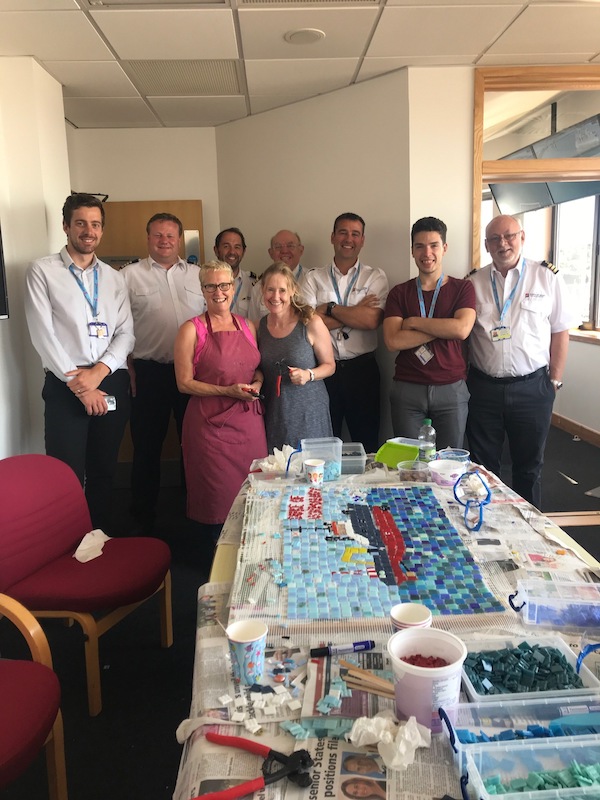 Pictured: Ports of Jersey created their own design featuring the Duke of Normandy.

“They all look gorgeous, the shiny surface on the tile shines through the water," she continued. "I’ve been swimming down there. It’s really fun to swim above the mosaics - you see the colours through the water.”