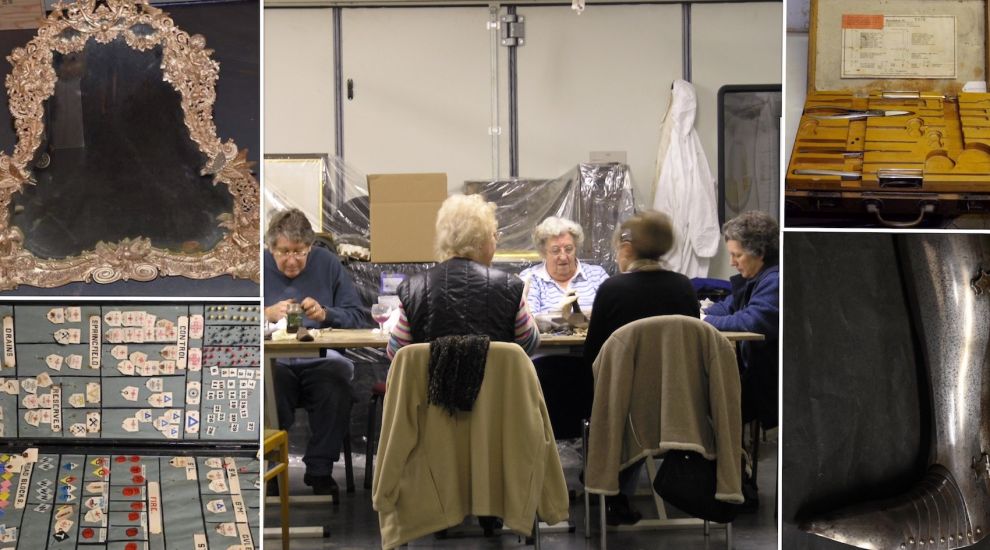 From shining armour to surgical saws... A team of volunteers responsible removing rust, dust and cobwebs from some of the island’s weirdest and most wonderful historic items are hanging up their aprons after 20 years.

The group was started in the late 1990s when Jersey Heritage's collections were moved from the barns and chapels they had been kept in into a purpose-built store in Trinity.

It was disbanded in early December after 20 years and 11,500 hours of volunteering as, in the words of the group, "they had finished the job".

"It’s the end of an era – especially for volunteer David Levitt, who has been with us from day one – but for the best possible reason," the team added. "Thank you to every member of the team, old and new, for their hard work."

For Express, some of the volunteers, including David Levitt, the longest serving member of the team, reminisced about their work and the odd items they got to see...

What made you want to be a conservation volunteer?

I joined the group about two years ago at the instigation of a friend, who had recently retired from volunteering. She made it seem great fun. It certainly has proved so to be, but also very interesting and informative. 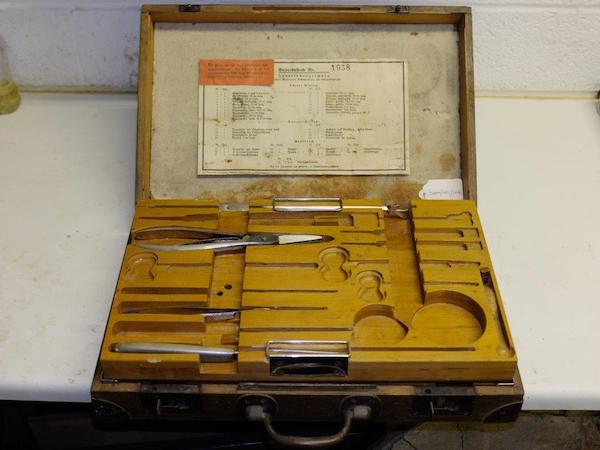 Pictured: Susan worked on a box of surgical instruments that belonged to a German doctor.

What is the ‘weirdest’ object you had in your hands?

Perhaps not weird, but certainly sinister to my mind, was the box of surgical instruments left behind at the end of the Occupation by a German doctor…too many saws and pincers for my liking!

What is your best memory of the group and the work you have undertaken?

The best thing about the group is the camaraderie. The other members have all been volunteering for many years and yet they were so welcoming to me, a newcomer. Whilst scraping, scrubbing and polishing a wealth of old artefacts, we put the world to rights. 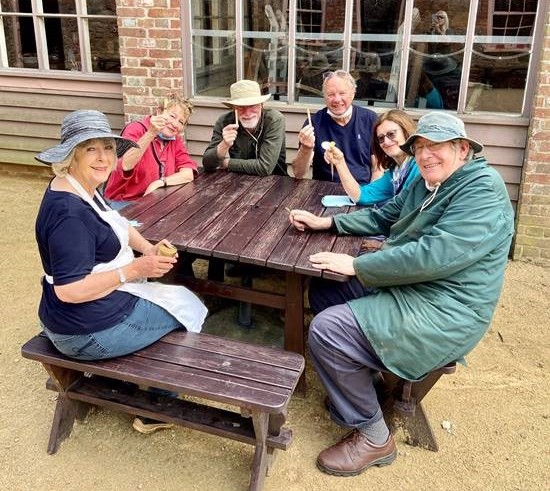 Pictured: The group taking a well-earned ice cream break at Hamptonne after cleaning all the tack in the stable.

It has been such a privilege to be able to handle so many interesting objects, normally only seen by me on display at various Heritage sites, and to bring them back in some measure to their former glory.

I have learned so much from our esteemed leader, Neil Mahrer, about the art of conservation and I do hope the group will be able to be resurrected in time, like the artefacts themselves. 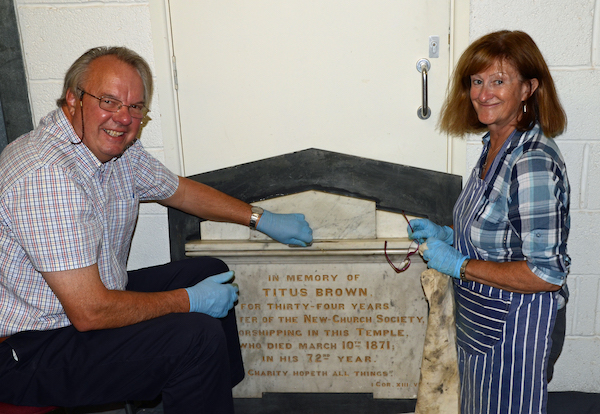 What made you want to be a conservation volunteer?

I have been a Conservation Volunteer for about ten years. I seem to remember reading about Neil’s role at Jersey Heritage, and how extra ‘scrubbers’ to work on a Friday afternoon up at Augres store workshops were needed, and as I enjoy history I thought I’d get in touch.

What is your favourite memory of the group and the work you have undertaken?

I really enjoyed cleaning a suit of armour from Mont Orgueil Castle. It’s a 19th century replica of a 16th century original. I was responsible for cleaning the legs (!) and the best way I found of keeping them still whilst rubbing the rust off then polishing them up, was to sit them one at a time, bent at the knee, across my lap. Never thought I’d have a suit of armour sitting on my knee. 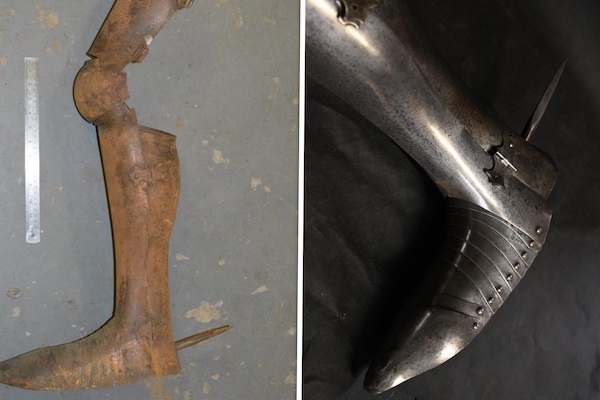 Pictured: Before and after shots of the armour Christine worked on.

Another thing that gave me goose bumps was cleaning Lillie Langtry’s looking glass. Its frame was silver in colour and wasn’t flat, rather the glass was surrounded by decorative plants, flowers and butterflies I seem to remember, all needing gentle dust removal from their crevices and shining up. I kept hoping to see Lillie’s face looking back at me!

I really enjoyed working with the team outdoors up at Hamptonne, cleaning the agricultural equipment on show up there. Sitting and chatting while we worked in such beautiful surroundings surrounded by cockerels, hens and chicks was just magic. As was going to the cafe in our break! 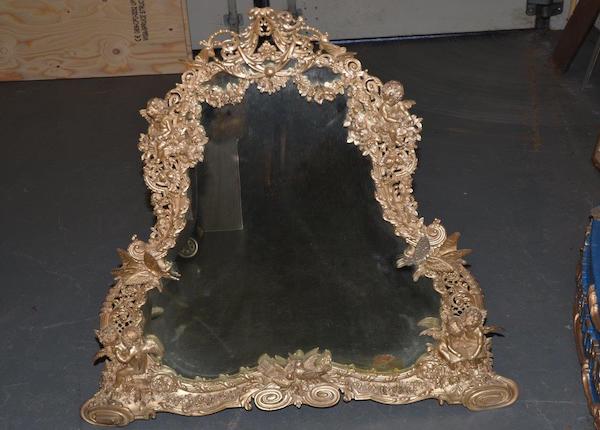 As a team, we have enjoyed going upstairs into the Store, just to look at the amazing range of objects from Jersey’s history, all cleaned by members of the team. It’s a great place to visit on its open days. 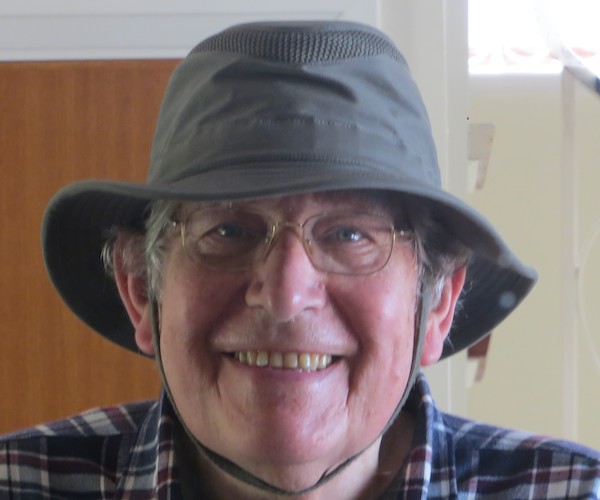 Pictured: David joined the team shortly after its inception in 1999.

When did you become a conservation volunteer and why?

I had retired a year or so before and was looking for things to do. It sounded interesting and worthwhile in the article in the JEP so I came along and saw Neil. I wanted to stay involved because the work was interesting but also because I was working with friends in a pleasant, happy atmosphere.

What is the strangest object you've come across?

Over the years, there have been a large number of mystery items, particularly hand tools from farming, shipbuilding and ‘making-do' in the Occupation. A rather macabre item was a homemade pig killer that was made from wood, leather and a large nail. 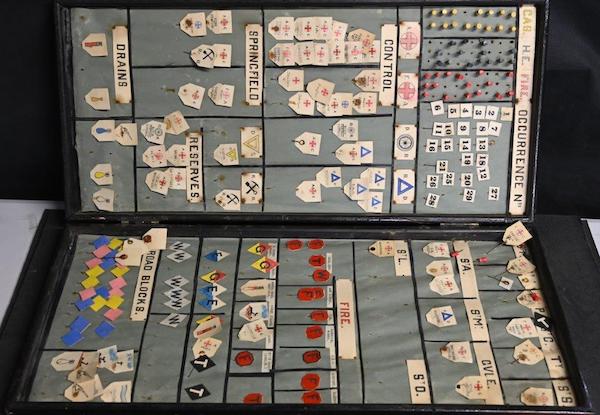 What is your best memory of the group and the work you have undertaken?

In the early days, we enjoyed our mid-afternoon tea break in the garden at the back of the Store in the summer sunshine and feasting on plums from the tree.

One of my most challenging and rewarding tasks was the restoration of Air Raid Precautions material from just before the outbreak of the Second World War. This involved the cleaning or replacement of countless pins with paper flags. I even made a special tool to facilitate gentle cleaning with a vacuum cleaner to avoid losing any bits.