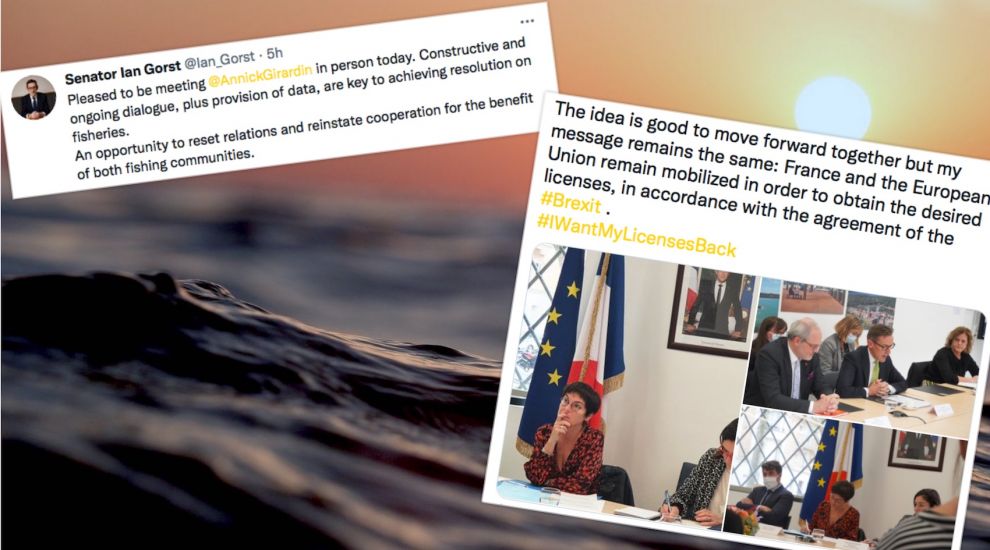 Jersey Ministers are hoping that strained relations with France have been “reset” by a meeting with the country’s Maritime Minister this morning.

Amid the continuing row over post-Brexit fishing rights, France’s Annick Girardin announced a 15-day “plan of action” to “get my licences back” earlier this month, which included seeking backing for potential “retaliatory measures” should they be needed.

Last week, she secured the support of 10 EU member states – Germany, Belgium, Cyprus, Spain, Greece, Ireland, Italy, Netherlands, Portgual and Sweden – in calls to get the United Kingdom and Channel Islands to concede to their demands for all fishing licence applications to be granted.

Regional fishing representatives also joined Ms Girardin in Brussels, where they met with the European Commission officials to discuss the matter.

While there, Normandy fishing committee head Dimitri Rogoff presented European Commission Vice-President for Interinstitutional Relations Maroš Šefčovič with a “golden whelk”, which he said was to ensure “he does not forget the fishermen in Jersey waters still awaiting their permits”.

Jersey has so far announced that up to 95 small boats are likely to be given a licence to fish in its waters, but told 75 boats that they did not meet the criteria and had 30 days’ notice to stop fishing around Jersey and its reefs.

Licences granted so far have been based on data about previous fishing activities – but the French argue that this necessity is unfair, as many smaller vessels are not equipped with appropriate tracking equipment.

Jersey’s Government has also previously argued that that the fact it cannot communicate directly with France under the terms of the UK-EU Brexit deal – instead having to pass information via London and Brussels - has slowed the process of granting licences.

The comments stood in stark contrast to an official statement issued by Ms Girardin on Friday, in which she said the matter was “not technical, it is political”.

After this morning’s meeting, she tweeted: “The idea is to move forward together but my message remains the same: France and the EU are ready to take action to obtain the desired licences, in accordance with the Brexit agreement”.

She added in English: “#IwantMyLicencesBack.”

Senator Gorst tweeted after the meeting that Jersey, the UK and France would be "working together with EU will ensure all parties abide by the TCA for the benefit of both fishing communities. #communicationanddata"

Later, the Minister met with EU Fisheries Commissioner Virginijus Sinkevičius, ahead of what were described as "official technical meetings tomorrow".

Ms Girardin had previously warned that France could pull the plug on Jersey's electricity supply if the licensing row was not resolved, but that threat was recently scaled back.

Earlier this month, the country's Minister for European Affairs, Clément Beaune, said earlier this month that "reducing" the supply as an act of retaliation was still possible, but "cutting the power to each inhabitant of Jersey this winter will not happen.”

Posted by Guy de Faye on Oct 18th, 2021
It is pretty astounding that attendees at Monday's "Fish Summit" in Brussels are suggesting that "strained relations" with France can be reset, when it should be obvious that they can never be the same again.

Express Readers might like to understand how access to Bay of Granville fishing grounds are planned to be shared out. Jersey has already conceded over 100 licences for French vessels to fish in Jersey's "sovereign waters". Five Jersey fishing boats have applied for licences in the "fished out" French waters, but - to date - NONE have been granted.

Jersey's "negotiators" are simply moving from one concession to the next, whilst our local fishing industry is paralysed and the Government of Jersey response is entirely inadequate across the board.

The French side should be under no illusions. Any further attempts to block catch landings or otherwise interfere with previously accepted trading arrangements - such as suddenly regrading Jersey sea water - will be met with the total withdrawal of all licences.
The French must understand that they no longer hold rights, of any description, to fish within 12 miles of Jersey and most of its offshore reefs - a licence is now a concession.

The priority is to preserve stocks of crustacea, fish and shellfish for the future and anything that runs counter to that objective will be resisted. The second priority is to preserve, via strict quotas, fishing opportunies for local vessels operating from Bay of Granville ports and no others. So let's reset the talks and put them on the right track.
Posted by Keith Marsh on Oct 18th, 2021
I totally agree with Guy's comment, anything else is just not on.
Posted by IanSmith97 on Oct 18th, 2021
It’s a surrender pure and simple.
Posted by Glenn Cowie on Oct 20th, 2021
Guy de Faye - absolutely spot on. Annick Girardin is nothing more than a spoilt child, not getting what she wants. I hope Gorst stands his ground, for once, and tells her where to go. Provide what has been asked for, in full and within timeframe, or forget it. No doubt, Gorst folds again and gives them whatever they want.
To place a comment please login Login »