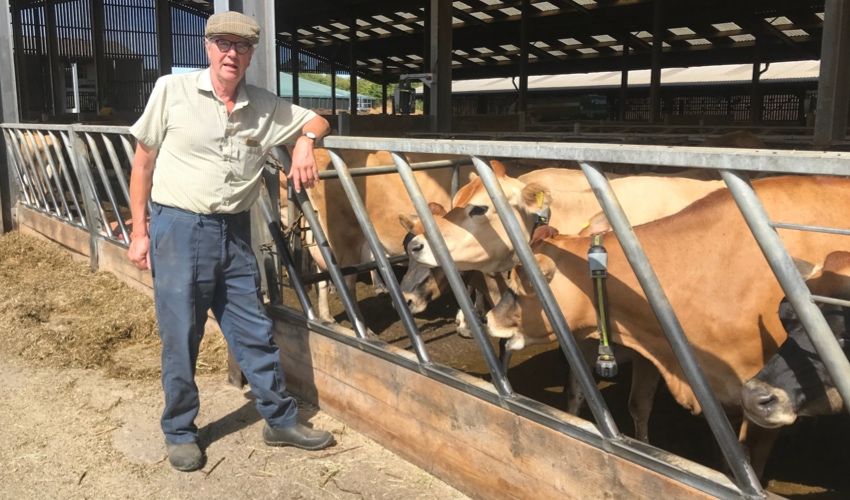 Dairy farmers are asking for urgent financial support from the Government as they face an existential threat caused by dry weather and the war in Ukraine.

This week, the States of Guernsey gave their dairy farmers almost £500,000 of emergency funding to prevent some going out of business.

Farmers in Jersey – facing the same dry weather and price inflation – are currently negotiating with the Government but say that they also need a “substantial” amount of money to ensure the viability of the island’s famous breed and a guaranteed supply of milk.

Explaining the situation, farmer Andrew Le Gallais, who is also chairman of Jersey Dairy, said that industry was being hit on multiple fronts: the dry weather not only meant that cows were running out of grass but it also that winter feed currently growing, such as maize, was stunted and depleted.

Farmers using winter feed "months before they should"

Adding to farmers’ woes, the price of imported feed – which is not just a substitute for grass but essential to provide nutrients absent in homegrown crops – has risen by more than 50% since Russia’s invasion of Ukraine.

“We are experiencing record low-levels of rainfall and the prospect of not much more in August at time which is critical for growing grass,” he said. 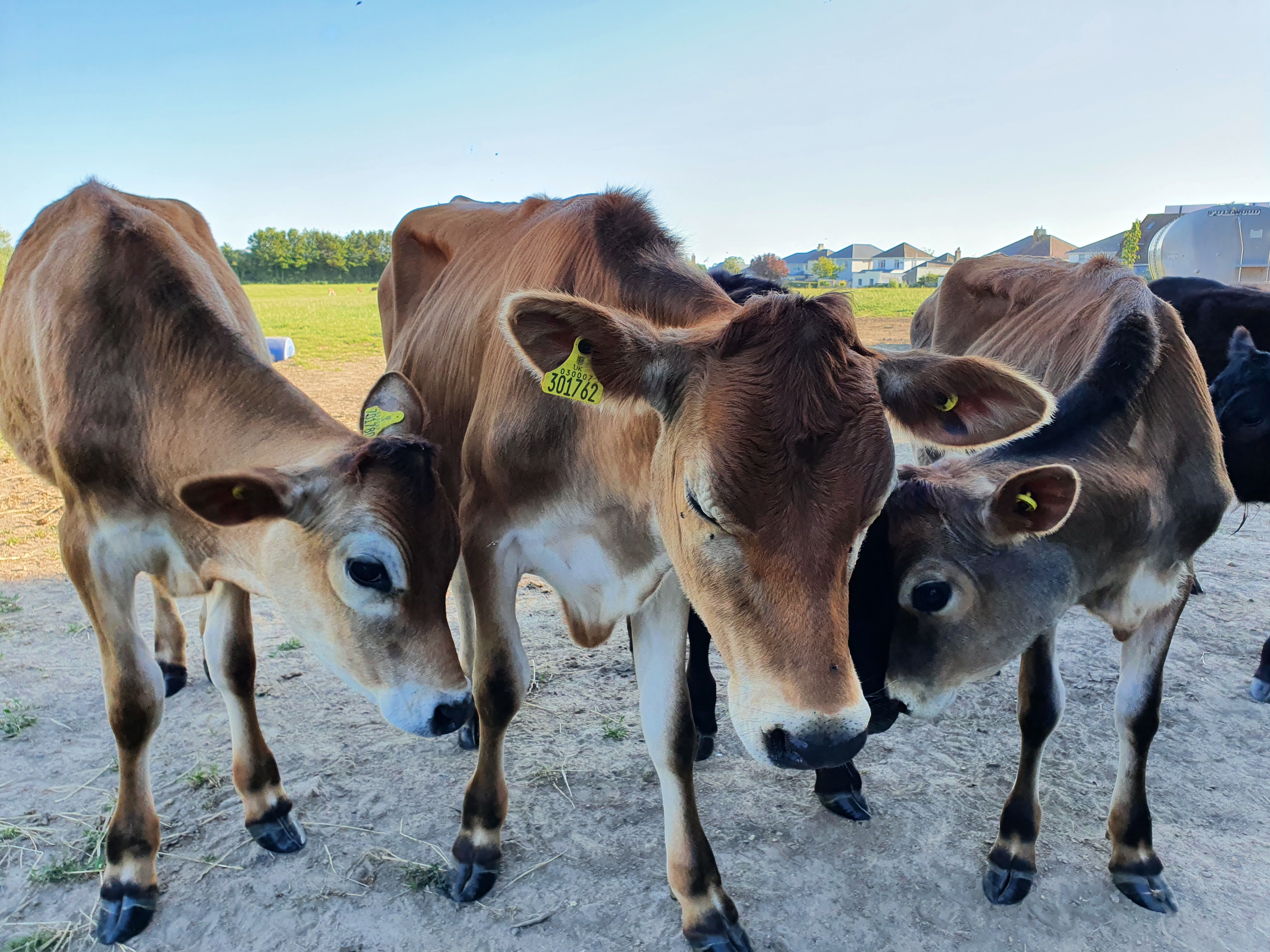 Pictured: The current dry weather means that farmers are already using their winter feed, far earlier than they should.

“It means that farmers are already starting to use their winter feed months before they should.

“This year, winter feeding has arrived on 1 August.”

He continued: “On top of that, the cost of imported feed has skyrocketed. The impact of Brexit and Covid were minute compared to the two key challenges we face now: the weather and the monumental effect of the Russian invasion of Ukraine.

“As dairy farmers, we are at the frontline of this war of rising costs, which we have no control over. And there is no sign ahead that these costs will come down.”

Mr Le Gallais added: “We need a very intensive dialogue with Government, which whom we already have a good relationship. We are going through that process at the moment, and it is particularly relevant that Bailiwick Express reported what is going on in Guernsey.

“I didn’t know that was coming but we are both islands with an important native breed, we farm in a similar style and we face the same costs.

“They have been awarded a very significant amount of money to continue to ensure they have a viable industry. We are in the same dialogue over here." 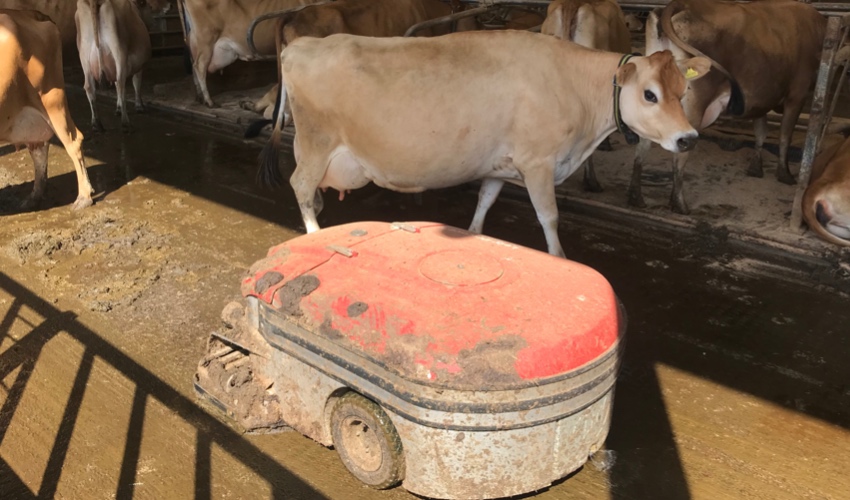 Pictured: Farmers say that Government help as made the industry more productive. This robot at Mr Le Gallais's farm picks up manure and automatically empties it into a slurry tank, improving cow hygiene and making the farm more efficient.

On what Jersey's farmers need, Mr Le Gallais said: "It would be premature for me to say what the quantum is going to be or when it is going to be but, as an industry, we have made it very apparent to the Government that this is very urgent."

"We cannot afford to lose any producers"

“Dairy farming is long-term and we are very resilient people but there is only so much you can take," he added.

"We cannot afford to lose any producers in this island. We are 13 milk producers, we have some wonderful cows, we’ve invested hugely in our dairy and farms. We should be in a very strong place, but all these factors have come together.

“It is a cliché to say ‘perfect storm’ but if you want to see one, come to my dairy farm. But there’s no point moaning, we have to get out of it and our first port of call is very much to government.

“I have every confidence in Economic Development Minister Kirsten Morel. We have worked closely with him over the past three years, and his Economic Framework for the Rural Environment, from a farming point of view, is a formative document which sets out an agenda to deal with situations such as this.

“We want vibrant family-owned businesses, and we take local food security very seriously, as well as our amazing cows.

“With that good relationship with the minister, we think the next few weeks will be crucial in our dialogue with him, but I am personally confident that he will recognise and support what we want to do. Guernsey has set the bar and I hope our politicians will relate to that.”

Mr Le Gallais said he could not comment on whether the price of milk would have go up – following an 8p rise in February – as it depended on the outcome of current discussions with the government.

However, he added: “Given the rising cost of living is such a huge issue which we all face, I think there is a strong moral argument that the support which we necessarily need should come from the government rather than the consumer.

"We are not talking about finger-in-the-air sums - we have detailed costs that we have shared with government for the last 15 years so they know exactly where costs have risen."

"This is not just about sticking plasters"

“The new Council of Ministers have been adept at putting more money in people’s pockets by raising tax thresholds etcetera. That is a clever move, and it is why we are spending a lot of time with government to make our case, present our facts, and ask for a greater proportion of funding.

“In the first instance, we have a one-off situation, and I would like to think it unlikely that we will have this extreme weather every single year.

“But this is not just about sticking plasters - this is about the long-term management of our countryside."

Turning to the recent decision of Woodside Farms to stop supplying the local market because it was no longer viable, Mr Le Gallais reflected: "I say we’re resilient but we’re not here to work every day of the week, face up to all the challenges and run a dairy unless there is a viable future." 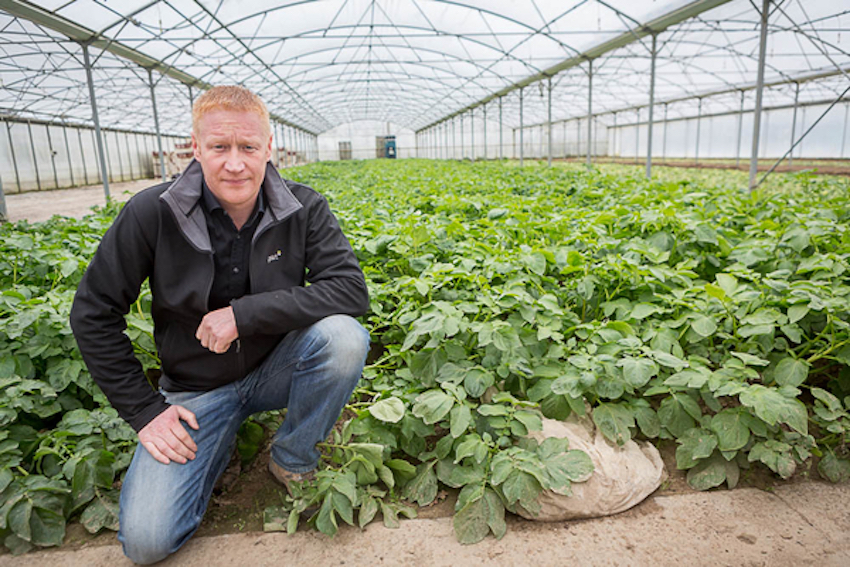 He continued: “This drought is hopefully going to focus the Government’s mind on working out what is the long-term position for farming. We may not have the thousands of farmers that we once had but we are as passionate as we have ever been.

“From a dairy perspective, if you take the farmers and their staff, the staff at the dairy and those at the RJA&HS, there are about 150 people. That’s 150 people looking after this cow.

“We contribute the greatest proportion of food security in this island, we have a heritage record that goes back to 1763, and the Jersey is the second largest dairy breed in the world. And it all started here.

“We have a huge positive impact on the environment and we’re working incredibly hard to monitor and mitigate against any greenhouse gases that we emit from the digestion of cows."

"Our cow is what helps to define our island"

Pictured: Dairy farmers argue that the cow - looked after by 150 people - is an integral part of the island's identity.

He reflected: “Our cow is what helps to define our island, with 150 people looking after it.

"How would people react if there weren’t any cows?

"There would be a crater left in this island.”

Posted by IanSmith97 on Aug 5th, 2022
I don’t suppose most of us would notice, sad but true.
Posted by Svante Arrhenius on Aug 5th, 2022
Sadly, Andrew, I don't think that most would care.
People are now so detached from where their agricultural produce comes from...let alone understanding the industry's importance to our Island.
Posted by Martin on Aug 5th, 2022
The Jersey Cow IS an iconic part of our heritage & be assured IF they go the likelihood of them being reinstated is almost nil!

We would then be importing milk & associated products!

= Less self reliant!
Posted by Jon Jon on Aug 5th, 2022
Without the remaining farmers and growers working the land in this Island just look how the countryside would look like.Overgrown fields full off weeds, rough grass, let alone vermin.Some land around us has been left uncultivated and what a mess its in!Farmers are at the bottom of the pile when it comes to income and for sure need further funding.
Posted by Keith Marsh on Aug 7th, 2022
Many people would care, but their pockets would be relieved, IF milk was imported ~ sad but true.
UK prices in supermarkets have just increased to £ 1.01 per litre ~ against £ 1.42 here.

When a family wants 14+ litres of milk a week ~ Times are very tough for so many.
Jersey Dairy need to work out HOW the retail price is made up and where the profits are going. Because the public cannot cope with further inflationary price hikes as in February.
Posted by Diana Groom on Jan 10th, 2023
I agree with the comment above by "Martin on Aug 5th" above. The Jersey Cow IS an iconic part of our heritage, and if the SoJ, and the Jersey public, do not seriously support farmers at this time then their eventual loss is assured.
Multiple thousands of our money is spent by the SoJ on a yearly basis on well less deserving causes purely because they think it "makes them look benevelant and caring". The image of the Jersey Cow is iconic and still helps to draw tourists to this now run down island.
I understand that many in Jersey are suffering with the ever increasing cost of foodstuffs which are blamed on Covid and the war in Ukraine etc., but for Jersey to lose our iconic cows in favour of cheap imported milk at the expense of our farmers (especially following the very sad loss of multiple cows recently to a yet unidentified source), should, I hope, be unthinkable to our States Members.
The SoJ should do everything it takes to support and financially assist farmers through this incredibly difficult period to allow Jersey Milk to continue to be available at an affordable price to maintain sales.
To place a comment please login Login »