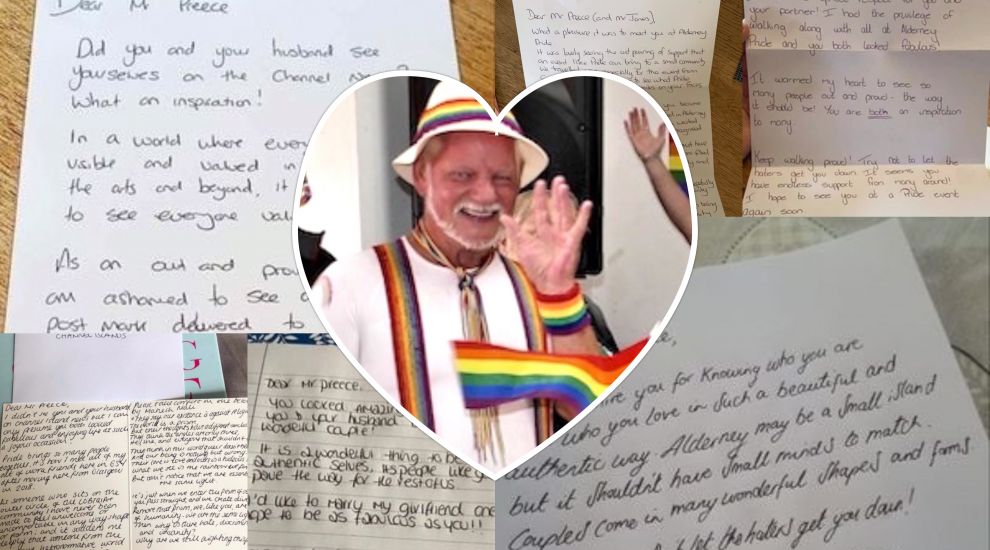 An equality charity is inviting people to write letters of support to an Alderney man, who recently received a homophobic letter after he celebrated Pride with his husband, in a bid to show “love outweighs hate by a landslide."

Dits Preece (pictured top) received a nameless note after being interviewed on TV about Alderney Pride, which promotes an open celebration of personal choice.

Last week, an anonymous author went to the effort of posting a discriminatory letter to the northern isle saying Mr Preece had "put me and my husband and grandson off our tea".

"You looked like a joke (The two of you). Try being in a circus."

Dits himself shared the letter online in response to the abuse, saying: "How pathetic, they can’t put their name to this and how narrow-minded they are."

Liberate CI then reposted the letter, describing it as displaying a homophobic attitude that has no place in society.

"The fact that someone felt the need to send it just proves why we still need Pride,” they wrote. "This is why is it so important to question homophobic attitudes wherever you may encounter them."

Speaking to Express, Ellie Jones, Liberate CEO and CI Pride Director, said: "You can have your thoughts, we are not the thought police, but sending a hate letter, it’s surprising it still happens but it happens more than we think.

"You get comments like ‘do you have to have pride’ and ‘why is it still needed?’ it’s because people are still treated in a different way because of their sexual orientation or gender identity.

"It is a lot better, probably Mr Preece and his husband, they would have seen so much discrimination during their time and because they are from an older generation being gay was illegal in their life, they have only been able to get married in their home island in the last three years. We would like to think we are past this but unfortunately not."

Over the weekend, a member of the Liberate CI team came up with the idea of writing to Mr Preece to show him and his husband “how many people are supportive and are not homophobic”.

“We’d love you to join us by writing a letter to him and to show that love outweighs hate by a landslide!” they wrote on their Facebook page, along with a selection of letters from their team to provide inspiration for those who need it.

Ellie said the charity hopes the initiative will help raise awareness and encourage people to find out about the experience of the LGBTQ+ and show more empathy and compassion.

"We know people do not understand being LGBTQ, the writer is obviously a certain age, because they mention being a grandmother, we understand they do not necessarily get it, in their lifetime it was illegal."

Liberate CI encouraged people to also share their letters in their thread or online with the #DearMrPreece.

One read: “Turning on the local news channel and seeing a segment on Alderney Pride featuring happy, affectionate LGBTQ+ people couples is so heart-warming. We have come a long way as a society in the past few years and I like to think most of our society not only tolerate but embrace LGBTQ+ people and diversity in all its forms.

“We know how important representation in the media can be, especially to the younger LGBTQ+ generation who may feel unsure or worried about coming out to family and friends. By being true to who you are and loving unashamedly, you are letting others know that they are free to do the same. Love will always outweigh hate.”

Andrew Moffat MBE, a teacher and co-founder of ‘No Outsiders’, a charity that promotes inclusive education and “community cohesion” to prepare young people and adults for life as “global citizens” came up with an assembly plan to encourage schools to discuss the topic of Pride with students and write letters.

So far, Ellie said the response has been "amazing" and "really positive". One of the latest letters received came from a nine-year-old from the UK who wrote that "couple means two, not opposite genders.

"If a nine-year-old can get it, hopefully the older generation can get it too," Ellie said.

The charity has invited Mr Preece and his husband at an event in Guernsey that will coincide with the Channel Islands Pride, which will take place in Jersey on Sunday 21 August. They will be invited as guest of honour and it is hoped they will bring some of the letters they received with them so they can be displayed.

Ellie said: "I think it would be lovely to see how far afield he will get letters from."