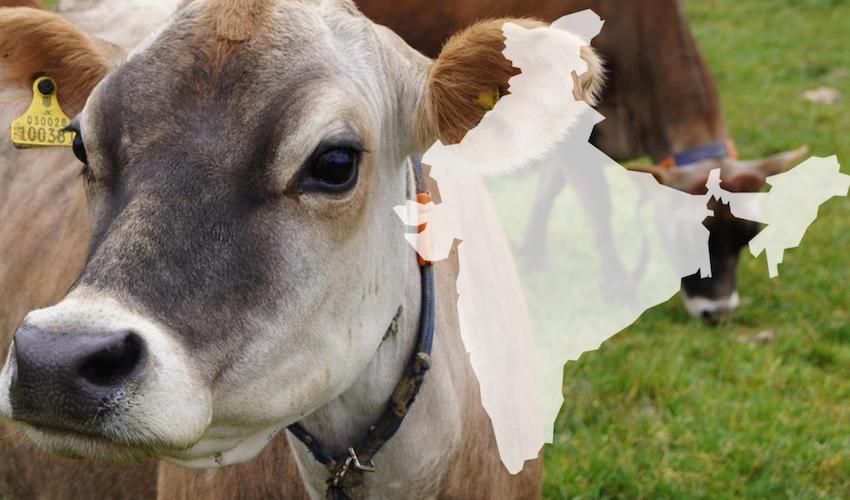 It may feel like déjà moo, but the Indian Government is once again locking horns with their local cattle farmers over a campaign to discredit the Jersey cow and promote domestic breeds.

The Indian farming community prefer breeds like Jersey which yield more milk than local varieties, but their government is once again trying to increase indigenous breeds of cow instead and is even importing semen from native Indian bulls to encourage the change.

Ordering the frozen semen of a breed that originated in India is the latest development in the unfounded smear campaign led by the Indian government against the Jersey cow, which has gained popularity across the world for its highly nutritious and creamy milk.

The Economic Times reports that New Delhi has ordered the semen of Gir bulls from Brazil to encourage the breeding of indigenous cows across the country.

Pictured: The Channel Island breed has been the subject of much cow-ntroversy in the sub-continent.

They have entered into the agreement with the South American country to get doses of the bulls semen for artificial insemination.

The Minister of State for animal husbandry, Sanjeev Balyan, said: “Within one-and-a-half months, the agreed doses of semen of our indigenous Gir bulls will be available in the country… This will be distributed across the state to promote breeding of indigenous cows within the country.”

This isn’t the first time that the Jersey cow has been the victim of the moo-mur mill in the Asian state.

Authorities in another region, Tamil Nadu, claimed that the Channel Island breed were destroying the ozone layer and taking native ‘desi’ cows’ jobs.

Pictured: The Indian government are keen to promote their native 'desi' cow over the Jersey breed.

Despite the cattle prattle, farmers across the world continue to opt for the Jersey cow, including in Rwanda which has been enjoying the benefits of Jersey Overseas Aid-backed programme which has seen nearly a quarter of a million cows distributed to vulnerable families since 2006.

Indeed, farmers in India have been defying these anti-Jersey campaigns.

Last year, officials in Bijnor pedalled a theory that Jersey milk caused diseases like autism and diabetes, but they were unsuccessful in preventing farmers in the region from farming the breed as they say its higher yield of milk is “economically beneficial” for them.

Andrew Le Gallais, Chairman of the Jersey Milk Marketing Board (JMMB), remarked that the inclination of Indian states to promote their native ‘desi’ cow is understandable.

Pictured: All kinds of misconceptions about Jersey cows and their milk have been pedalled by the authorities in India.

Despite acknowledging that Jersey has that “in common” with the Indian authorities, Mr Le Gallais felt that they’ve taken this “significantly further” by putting forward “not just a strong opinion against the Jersey breed" but statements he dubbed "grossly factually incorrect, and that is well proven.”

He said that the success of the ‘Send a Cow’ campaign in Rwanda proves this point.

“When you make the comparison to Rwanda which also has an indigenous cow and where the RJA&HS are doing this phenomenal work with Jersey Overseas Aid… to help to improve the indigenous cattle breed in Rwanda, not just simply to provide milk but… instigate massive social change, it puts the grumpy Indian message in context.”

Posted by Salman Zaman on Sep 24th, 2019
Sad reflection on the Indian Government that is espousing a very aggressive nationalist and religous ideology, that encompasses not just cows but humans as well.
To place a comment please login Login »

Be-leaf in a new environmental standard

Tech and sustainability at forefront of farming conference