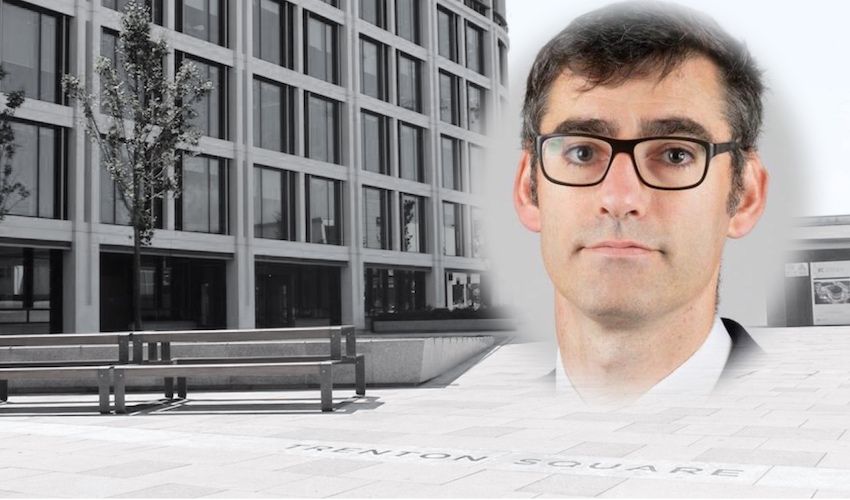 Jersey's politicians are to be asked to rename a local square after the West African country of Benin, as a way of acknowledging the island's links with the slave trade.

St. Brelade Deputy Montfort Tadier’s proposals come as several statues linked with slave trade have been toppled in the UK amid growing support for the Black Lives Matter movement.

In Jersey, the statue of Sir George Carteret in St. Peter was covered in paint last week amid calls for it to be removed due to the naval privateer’s links with the slave trade.

Meanwhile, around 1,000 people have signed a Change.org petition for the statue to be removed, and for Trenton Square, part of the International Finance Centre development, to be renamed. 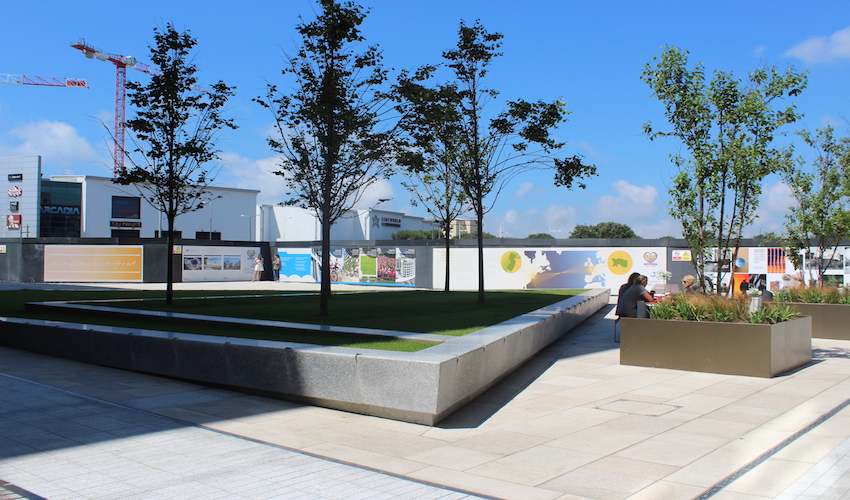 Pictured: Trenton Square was inaugurated in 2018.

Inaugurated in 2018, the square celebrated links between Jersey and New Jersey, whose capital is Trenton.

However, that city draws its name from William Trent, who both traded and owned slaves.

A separate e-petition launched on Monday has gained over 510 signatures.

But, contacted by Express, St Helier Constable Simon Crowcroft maintained his view that the Trenton name should not be changed. 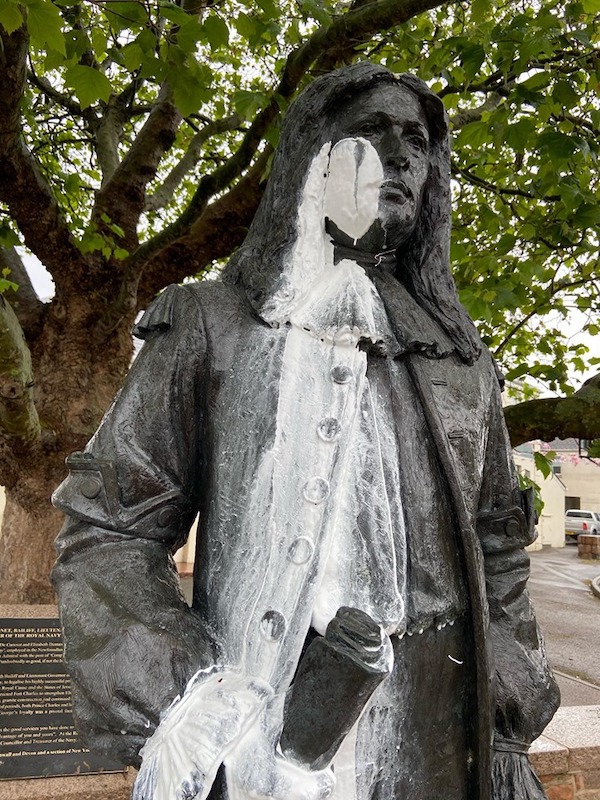 Pictured: The statue of George de Carteret in St. Peter after it was vandalised.

Deputy Tadier is now appealing to the Treasury Minister, Deputy Susie Pinel, to force the States of Jersey Development Company, as shareholder representative, to rename Trenton Square as Benin Square.

He argues the renaming would draw a link with the 302 people Sir George Carteret’s son took from the country to the West Indies.

“Rather than naming one of our public areas after a town in the stolen lands of New Jersey (which itself is named after a slave trader), it would be a fitting tribute to name it after the country from which these 302 slaves were stolen,” Deputy Tadier wrote.

Pictured: Deputy Tadier wants the Assembly to receive a report into a memorial acknowledging Jersey’s part in the Slave Trade before 23 August 2021.

The St. Brelade Deputy also wants to see a memorial acknowledging Jersey’s part in the slave trade to be erected and is asking the Chief Minister to commission a report into this and present it to the States before 23 August 2021.

While Jersey does “a very good job in remembering the forced slave workers of the Occupation”, Deputy Tadier argued the island isn’t as skilled “at mea culpas”.

“In 2014, a time when other maritime towns around the world had long been having the difficult conversations about their monuments and even removing them, or at least updating the narratives of their heroes-cum-villains, someone in Jersey was putting up a statue to a former slave trader,” he added.

Pictured: Deputy Tadier is asking for an audit of all place names and memorials relating to former slave traders in Jersey.

Finally, Deputy Tadier is asking for an audit of all place names and memorials relating to former slave traders in Jersey “in order to inform work on understanding and explaining the full contribution of the slave trade to Jersey’s history”.

This, he suggested, should be done in conjunction with Jersey Heritage, the Jersey Community Relations Trust, Black Lives Matter Jersey and other potential stakeholders.

In the report accompanying his proposals, Deputy Tadier said his third point was not about rewriting history but rather about understanding that “there are histories (plural) and that those histories change depending on who is narrating them.”

“There are those who say that you should not rewrite history, but in this case, the narrative we have allowed to be told is exactly that re-written history,” he said. 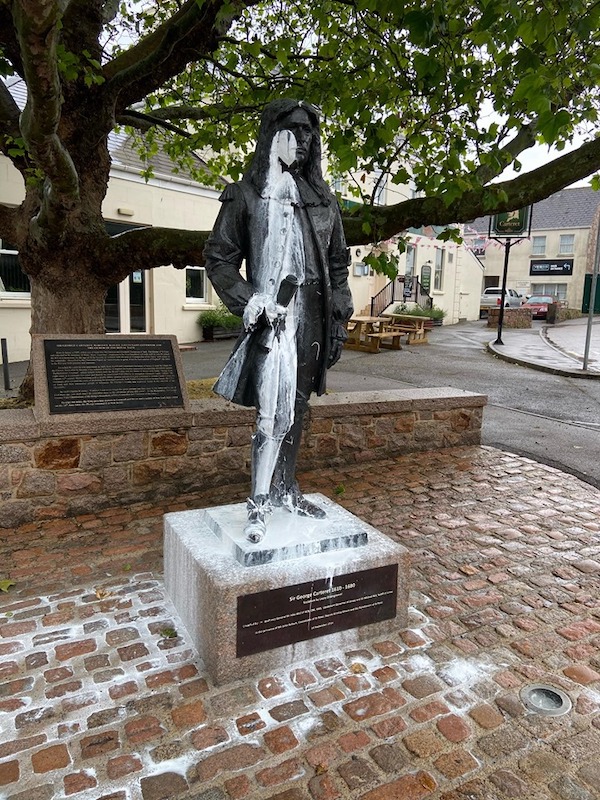 The Deputy said Sir George’s statue was a good example of the “whitewashed version” of history, as its plaque is “gushing” in its praise and makes no reference to “(De) Carteret’s personal profit from buying, selling and enslaving other human beings”.

“In a sense, it is logical that the plaque contains no balance in this regard,” Deputy Tadier wrote. “We put up statues to heroes (traditionally). Any mention of his negative past would have shown he was not a hero, but a villain to many and would have made such an erection unlikely in the first place.” 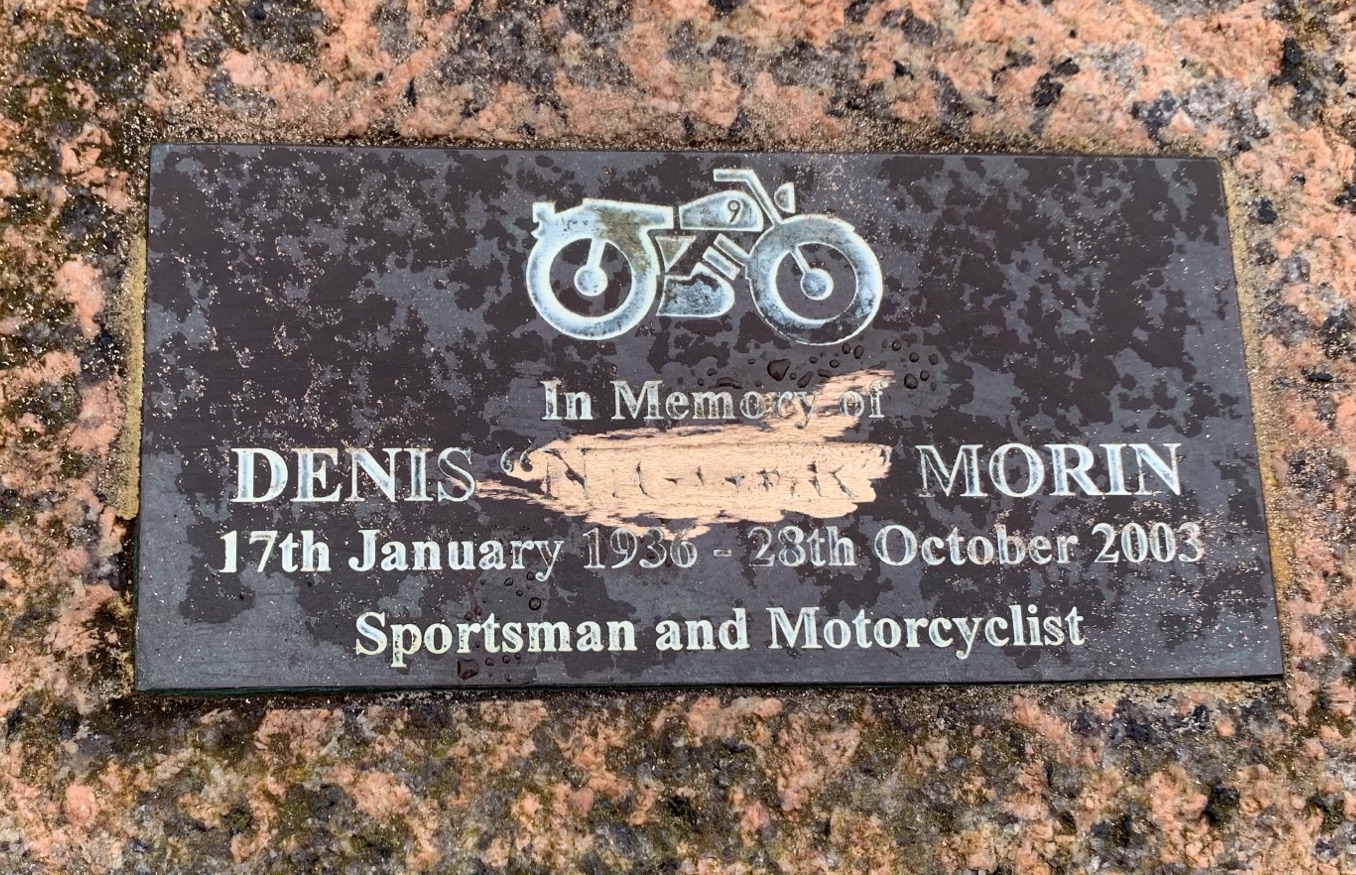 Pictured: A racist term appearing on a public memorial to a local motorcyclist was recently covered up.

The proposals come as several petitions have sprung on the Government’s Petitions page in support of the Black Lives Matter movement,

These include calls for a review of all public statues and monuments linked to former slave traders, the renaming of Trenton Square and calls for Black British history to be taught in schools.

Another petition wants to make the use racist terms on permanent fixtures in public places illegal.

Created by Jade Ecobichon-Gray, it reads: “Standing up against racial injustice comes in many forms and making it illegal to use racist terms on permanent fixtures in publicly-accessible land is one of them.”

It comes after a racist term appearing on a public memorial to a local motorcyclist was covered up after scores of islanders voiced their disapproval at the N-word being on prominent public display.

Ms Gray had called for the plaque’s removal in 2015 but no action was taken in the time.

Posted by nigel pearce on Jun 16th, 2020
So remove the name of a slave trader (fine by me) but to replace it with the name of a country where white slave traders were sold slaves by their fellow Africans!
Posted by Nigel Queree on Jun 16th, 2020
I fear that Deputy Tadier is guilty of seeing this issue in a very over simplified manner, like so many other people, that white people enslaved black people .

I am not an expert but I believe that the issue of trans-Atlantic slavery was not as clear cut as is made out and I would welcome some historical clarity.

I understand that many of the slaves bought on, what became known as the slave coast now present day Benin and other countries, were bought from local chiefs who had themselves enslaved those people as a result of crime or wars.

There is a risk, therefore, by re-naming the square after Benin that we are celebrating the actual enslavement.

A bit of historical perspective and recognition that we in the 21st century cannot the-write history might help.

The continuation of slavery all over the world today is the problem we should be fighting.
Posted by Jon Jon on Jun 17th, 2020
Sorry all this change a name,take down a statue because of connections with slavery..for heavens sake rip up every history book that mentions it,slavery still happens today in some parts of the world...amazed the statue of George in royal square hadn’t been removed yet!
Posted by William Boyd on Jun 17th, 2020
Nigel, they do know about it but as it does not fit in with their anti British, anti capitalist and anti everything agenda, so they don't mention it. The inland African chiefs after having beaten their neighbours in battle or prolonged war, sold their captives to Arab slavers who in turn sold them to evil white people. All involved in this were evil, especially by today's standards, not so much by the standards of the 16th, 17th, 18th and early 19th centuries. Many in Britain DID see it as evil and we were the first to stop it. Another hidden fact, during a three hundred year period 1,000,000 (yes, one million) Europeans were captured from coastal areas of Southern Europe (even SW England) and sold in the slave markets in North Africa and Arabia. Two wrongs do not make a right but we are in the middle of a left wing onslaught to blame everything on Britons and Europeans. It just ain't so.
To place a comment please login Login »