Deputy in the doghouse! 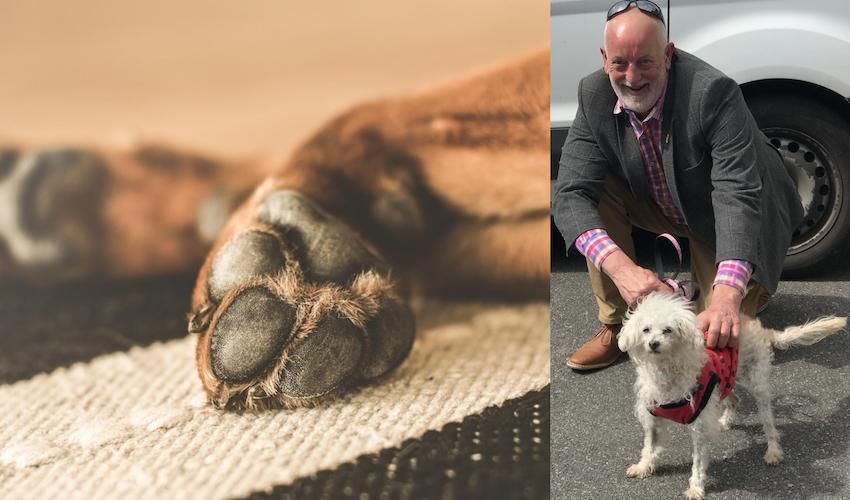 Deputy in the doghouse!

Animal-loving former Environment Minister Deputy Steve Luce is showing dogged determination to raise money for the JSPCA by volunteering himself to be locked away in a kennel for a full working day next week.

With just over a week to go until he goes into the doghouse, Express caught 'pup' with Deputy Luce to talk about the ‘barking mad’ fundraising challenge which is taking place on Friday 7 June.

When the opportunity arose, the Deputy said he hardly had to ‘paws’ for thought before volunteering himself as dog for a day: “It didn’t take any persuading at all, indeed it was me that contacted Kevin [Keen].”

Pictured: Deputy Luce said that as an animal-lover he was keen to get involved.

The former Environment Minister made no bones about the fact that his colleagues in the States Assembly seemed eager to don the dog collar: “There didn’t seem to be anyone on the Council of Ministers that was prepared to take up the challenge, and I felt very strongly that someone from the States needed to do this. I was only too pleased to volunteer.”

Those on their best behaviour will be rewarded with treats such as biscuits, blankets and even a chair and all the participants will go for ‘walkies’ twice in the day.

Pictured: CEO of the Co-Op Colin Macleod is one of the 'Top Dog' hopefuls.

At the time of writing, the challenge’s JustGiving page had crowdfunded over £10,000.

To raise more funds throughout the event itself, the contestants will have to take their phones and laptops into the kennel with them so that they can document their day in the doghouse.

Talking about why he wanted to support the Animal Shelter, animal-lover Deputy Luce said: “The JSPCA offer a unique and irreplaceable service to the island. They are always there to help animals of all shapes and sizes, most usually when animals are injured or lost. As a cat and dog owner I can only do what I can to help them.”

Any ‘good dog’ knows to have a few tricks up his sleeve and Deputy Luce said his working routine has been a good regimen for him in the run-up to the challenge: “I work long hours without food sometimes, so I’m hoping I can survive!

“However, if people want to donate so I can be fed, or be taken for a walk, then that would be nice. I fully appreciate, however, that some might pay to make sure I’m NOT allowed out at all - and I’m happy about that too if they donate generously!”

He also plans to turn on the ‘puppy-eyes’ as a way to win the hearts of donors: “I’ll just try to look sad and as if I need a good home to go to.”

On behalf of the JSPCA, Barbara Keywood said that the charity was “delighted” with the fundraisers’ efforts so far.

“They have really jumped into the challenge and there is some friendly rivalry in the hope of being crowned ‘Top Dog’. Whilst fundraising is important, these individuals are doing something incredible for the animals in our care [by] helping us continue our vital work and providing a home to many animals in the future.”

She added that the aim of the challenge is to raise awareness about the challenges of rehoming some of the animals that come into the Shelter’s care: “We had a fantastic response of nominations this year and for some well-known influencers to join us and do something a bit mad for charity.

“We are thrilled to welcome our 12 contestants and help us spread the word that some animals stay in our care for longer than we would hope. We offer a temporary home to sick, injured, old and unwanted animals in Jersey and whilst we try our hardest to advertise our rehoming animals, some can take longer to find homes for due to medical or behaviour problems. Unfortunately sometimes it can just be the age or colour.”

Barbara reminded islanders that they can support the challenge by tuning into social media on the day where the JSPCA and the contestants themselves will be broadcasting live feeds and interviews.

To back your favourite to become ‘Top Dog’ you can donate online here.