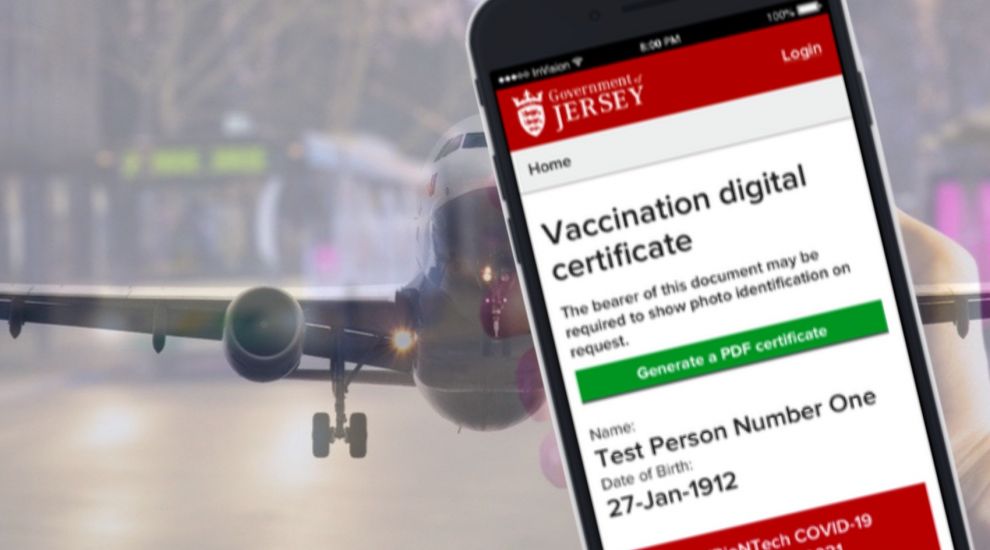 Islanders travelling to countries demanding vaccine passports will be able to use a Government-issued digital certificate from early next week.

People will be able to use a QR code to evidence their first and second vaccine doses when asked to, for instance, when entering a French restaurant or a bar in Wales.

Future developments of the electronic certificate will include records of any positive or negative covid tests, for jurisdictions that require that information.

Islanders will first have to register on the Government’s Yoti app in order to authenticate their identity and set up a ‘One Gov’ account.

They will then be able to view and display their vaccination record, including all doses administered, on one.gov.je and request a QR code for their first and second vaccine doses, which will be sent to their email to use as evidence of vaccination status if they are ever offline.

The QR codes last for 30 days – as they do across the UK – but can be reissued at any time. 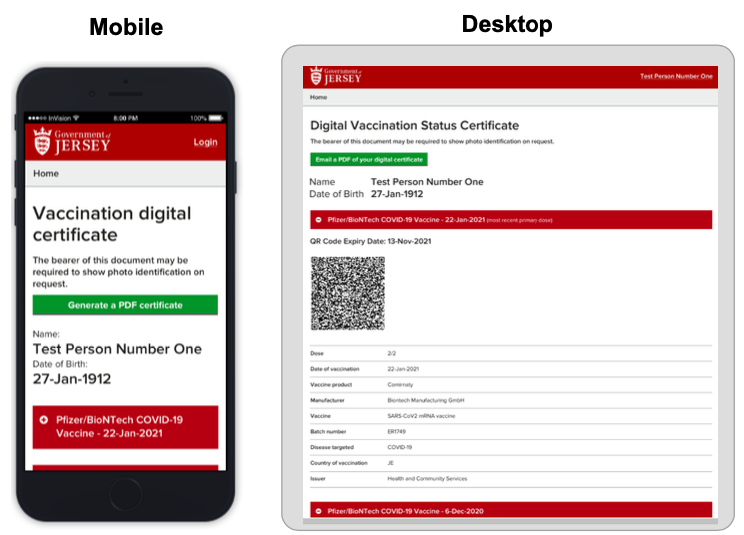 Pictured: How the certificate will look on a mobile and desktop device.

In the coming days, the UK is expected to join the ‘EU Digital Covid Certificate Gateway’, which will allow Jersey-issued digital certificates, which are based on the NHS version, to be used for travel and domestic use across Europe and beyond.

Yoti is only available for Islanders aged over 16 so those under that age, and those who do not have access to the internet, can call the Coronavirus helpline to request a QR code to be emailed for each vaccine dose received.

Chief Minister Senator John Le Fondré said: “I am pleased that evidence of islanders’ vaccination status will now be available digitally. I know many people will welcome the accessibility of having a QR code for first and second doses displayed on their smartphone or emailed to them.

“We are rapidly working on giving islanders the ability to save the certificate to their smartphone which can be used offline. But for now, for offline use, please just request the PDF certificate, save a copy of it, and print it to take while travelling."

The information contained in the QR code cannot be retained on any reader device and only appears as a green tick or red cross to those checking vaccine status.

At the moment, the certificate does not produce a code for a booster dose but this is expected to be a future development once it is introduced in the UK and EU.

Who wants to see a vaccine passport?

England - domestic passport scheme paused so not in force.

Posted by Peter Richardson on Oct 15th, 2021
Would someone explain why I am going to trust Yoti with my personal details and if they are stolen and misused will Gov.je compensate me.
Posted by Private Individual on Oct 15th, 2021
More control and restrictions.
When are they going to start removing all these controls on our lives?
What is the end date?
Posted by Scott Mills on Oct 15th, 2021
here comes more rights being taken away, oh the end is nigh!!! Think that guy who used to write on his home up mont cochon was right in the end!!! Lovely beaches today
Posted by Keith Marsh on Oct 18th, 2021
Why have we to open an account with Yoti ~ who are they ? because I don't trust our Ministers or anything they say
To place a comment please login Login »