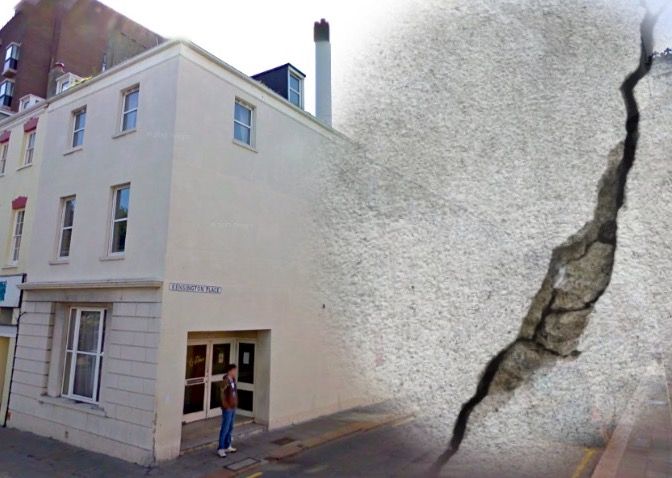 An asbestos-ridden hotel turned doctors’ quarters and hospital offices could undergo £560,000 of major surgery if plans are approved – but engineers warn that the building may be beyond repair.

In an application submitted for approval this month, the States released plans to completely renovate the dilapidated three-storey St. Elmo building and knock down 2-4 Kensington Place to make way for a new electricity substation.

Architects said the reworked St. Elmo design would involve a facelift, with new openings to the building aiming to make the exterior more "reflective of the typical facades in the area." They added that the front could also feature an "active" street frontage, involving a "careful use of colour" and night-time LED lighting.

St. Elmo was acquired by the States of Jersey in the 1980s to provide residential accommodation for staff, but was later turned into a combination of offices, staff changing rooms and a doctors’ mess where staff can rest when they are not ‘on-call’ on the ground floor.

But over the years, it fell into a severe state of disrepair.

Pictured: One of the current entrances to the St. Elmo building.

A condition review of the building commissioned by Jersey Property Holdings and conducted by Beaumont Structural Consultants, found that there were several problems with the structure of the building.

Their report stated that in 2015, the ground floor ceiling collapsed due to water ingress – a problem throughout the building.

It added that there were cracks in the external and internal walls – many of which were described as scuff-marked and dirty. Access to the third-floor roof space was reported as being impossible due to the presence of asbestos, which in April 2018 was also found in the ground floor doctors’ ‘Games’ room.

The scale of the issues, which another report suggested would take £560,428 to fully repair, were such that they gave Beaumont Structural Consultants “cause for concern regarding the structural condition of the building and its suitability for the proposed use.”

Pictured: The area of proposed development, near the Parade.

Despite this, Waddington Architects, who drew up the plans, argued that the redevelopment was necessary. In their design statement, they explained that the location of a nearby Jersey Electricity (JEC) sub-station embedded into the Stafford and Revere Hotel was “problematic” and needed to be changed.

In a supporting letter, JEC described the current set-up as “extremely inconvenient for both JE and the site owner, very difficult to maintain, and virtually impossible to asset replace to a good standard.”

Architects said in their design statement that the redevelopment was not linked with the £466million Future Hospital project.

However, they added: “There is the potential, in future, for parts of the new building to be repurposed for the Future Hospital project, but this is not part of the proposal and, if required, would be addressed at a later stage.” 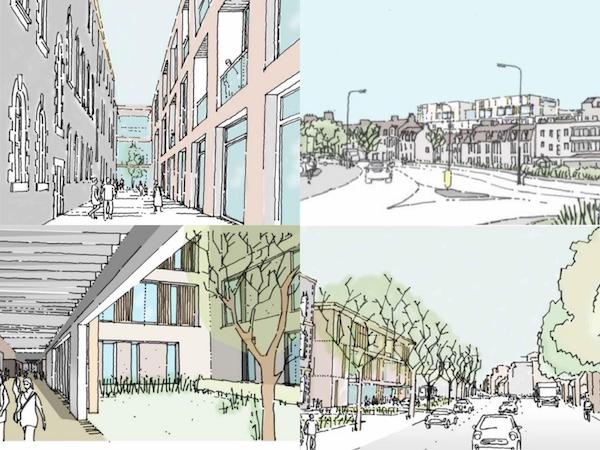 Pictured: The plans are not directly connected with the Future Hospital, architects said, but could be repurposed.

The news follows yesterday’s announcement from the Planning Inspector in charge of reviewing the revised Future Hospital plans that he was open to considering other hospital locations as part of his inquiry.

While he refused to conduct “an Inquiry within an Inquiry”, he said that his review would aim to conclude which site(s) would be preferable in the event that the current planning application was refused a second time.

Posted by Jean Lelliott on Jul 26th, 2018
No mention of this asbestos in the JEC letter on the Planning site. Another attempt to mislead the public methinks. This should have formed part of the future hospital application and these buildings are listed.
Posted by nigel pearce on Jul 27th, 2018
Surely this building would be part of the hospital development. I cannot see the point of repairing it.
Posted by Charles Dart on Jul 30th, 2018
Why on Earth spend over half a million pounds on doing up a building that is going to be torn down in the next few years anyway? I doubt if St. Elmo is listed.
To place a comment please login Login »