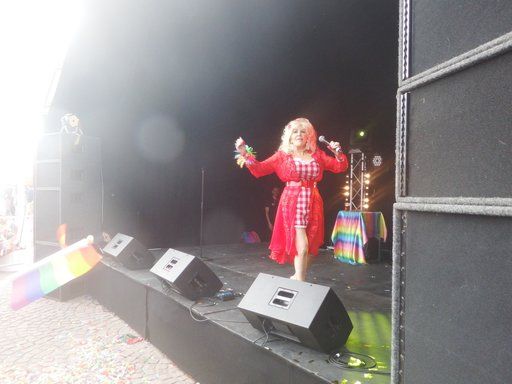 Paula Randell, aka Dolly Parton, belted out the hits as the Pride Week audience revelled to classics like “Nine to Five” and “Jolene” at Weighbridge Square.

The festival was organised by equality charity Liberate and culminated in a parade with around 5,000 followers through the streets of St Helier. The afternoon of free entertainment was topped by Dolly Parton’s performance, turning Jersey into a mini Dollywood.

Chairman of Jersey Liberate, Christian May, said: “Pride Week had been a real success, with hundreds and hundreds of people taking part from across the Channel Islands and beyond.

“The response we have had has been fantastic. It has been a memorable week and there has been an amazing sense of community across Jersey and Guernsey.

“Pride Week demonstrates how far the Channel Islands have come in respect of equality and anti-discrimination.

“Paula Randell was an absolute star as Dame Shirley Bassey in our inaugral 2014 event and got the crowd hugely motivated. It is a delight that she is part of our Pride family and agreed to open the stage in our second year.”

All monies raised this week will go towards education to combat bullying and discrimination.

DSCF1843 from Bailiwick Express on Vimeo.