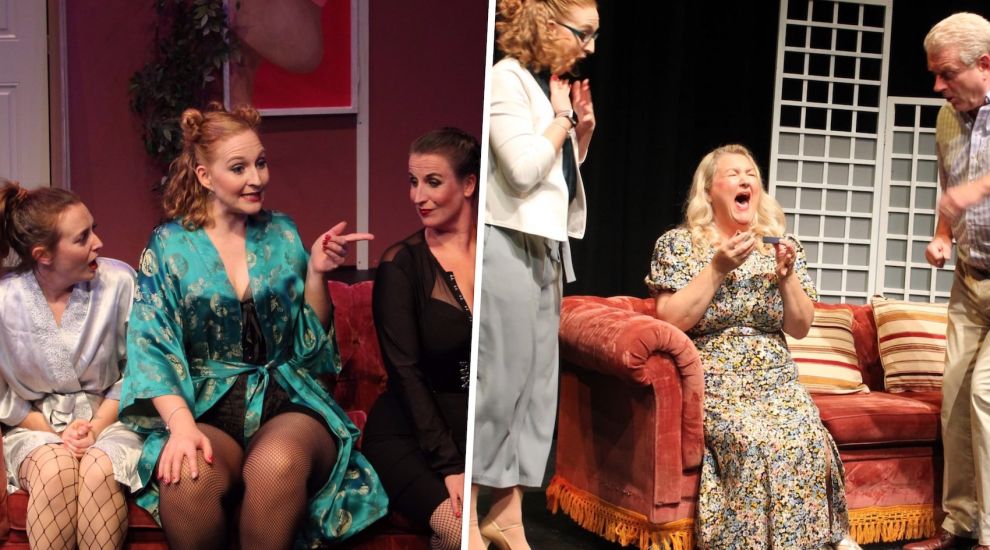 A farcical family feud and a rib-tickling piece inspired by a photo of Amsterdam's Red Light district dreamed up and directed by a local playwright are taking to the stage this week in a double bill of comedy.

Patricia Robinson Leigh’s 'Is There Anybody There?' and 'Red Hot in Amsterdam' are being performed at Jersey Arts Centre every night until Saturday 16 October at 19:30.

Patricia has not only written both plays but also directed a cast of eight familiar faces from the Jersey Amateur Dramatics Club.

The playwright explained her first playwriting experience came after she starred in a JADC’s pantomime with two of her children, who were then aged six and eight, as a fairy wearing a “very tight pink tutu”.

“I enjoyed the formulaic craziness, and audience inclusivity of pantomime so I decided to write one myself and based it loosely on ‘The Princess and the Frog’,” Patricia said. “It was very successful and at the end of the run it transferred to the Opera House. From then it was a natural progression into other forms of writing.”

When writing plays, Patricia says, that “inspiration can come from anywhere if you’re looking for it”. Both her plays were inspired by different things.

‘Is There Anybody There?’ bloomed from the thought of a family dispute over a ‘Last Will and Testament’ whilst the first seeds of ‘Red Hot in Amsterdam’ sprouted during a train journey in the UK after Patricia picked up a copy of News of the World left by an earlier passenger.

“In it was a half-page article and photograph of prostitutes working in the windows of the Red Light district in Amsterdam,” Patricia said. “I thought it would make a great setting for a play, so I expanded the idea, threw in a diamond heist, a couple of villains, a chief inspector and a couple of brothel ‘workers’ and set about creating the story around them.

“The play was published by Samuel French the world’s leading publishers of musical and plays and prior to covid was playing in venues in Australia.”

Patricia and the cast have been rehearsing over the last six weeks, which she says has been “tremendous fun”.

“This excellent cast of actors have all risen to the challenge and above,” she said. “I’m sure lots of nerves and excitement will be flying around backstage when the curtain goes up on opening night and the cast are waiting in the wings while I have the pleasure of sitting back and watching the fruits of all our labour.

“However, I doubt that will happen. I suspect I’ll be a nervous wreck backstage, not knowing what to do with myself and wishing I was ‘out there’ with them.”