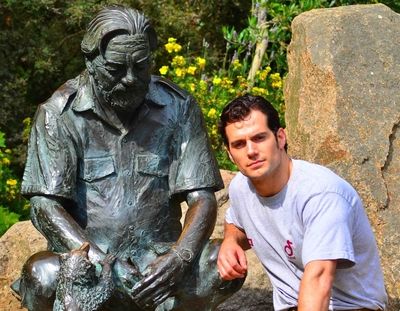 Durrell ambassador, actor Henry Cavill - 'Superman' to his fans - will be flying in for next year's Durrell Challenge, cheering on the runners of all ages and abilities.

The event will take place on Sunday, May 14th and will include the 13Km race from St Helier to Durrell Wildlife Park. In addition, 2017 will see the introduction of the 'Superhero Stroll', which is described as an interactive lap of the park for all children under the age of 16 years.

Jersey-born actor Henry Cavill said: “We’re 6 months away from the next Durrell Challenge! My training while not in earnest has indeed begun. I’m very much looking forward to seeing you all there! Hopefully I’ll be a little better at the hills this time!”

Lee Durrell, Honorary Director of Durrell, believes this will be an important day for Durrell. She said: “In announcing the second ever Durrell Challenge, I am thrilled to say that Henry Cavill will be with us again. Henry has been a fantastic Ambassador for Durrell, and with Henry running in the 2017 Challenge, I am sure the day will be a memorable one for everyone involved – the runners, the families and children visiting the Wildlife Park and maybe even for the animals!”

To keep in theme of the main event and in honour of Durrell Ambassador Henry Cavill, Durrell want all entrants of the Superhero Stroll to embrace their inner Superhero.

There will be themed merchandise available on the day in case you cannot locate your super hero vest in the cupboard. Buggies and an accompanying parent are welcomed for those keener younger entrants under four years of age.

The popular Family Fun Day will return with plenty of entertainment at the park after the race, including local musicians, arts and crafts, tantalizing food and drinks, talks with the keepers and the chance to learn more about conservation and the animals at Durrell.

Durrell Wildlife Park will be open to all runners, their families, Durrell members, and visitors.