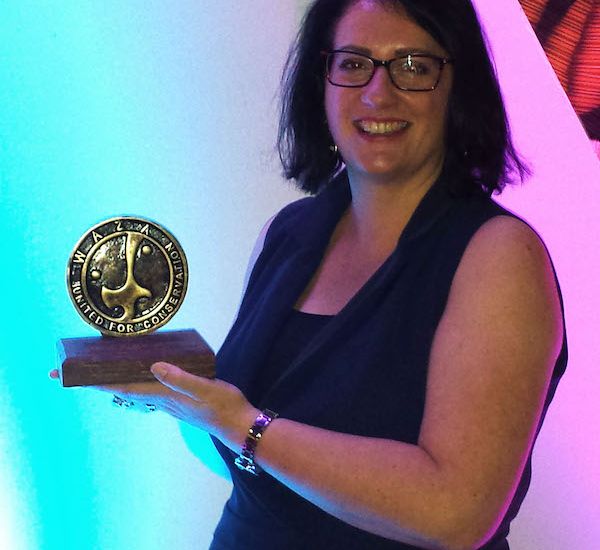 Durrell is the first to win a new Conservation Award, one which Lee Durrell hopes "heralds an era of even greater commitment to conservation by our community."

The Trust picked up the award at the 71st World Association of Zoos and Aquariums (WAZA) Conference in Puebla in Mexico.

Durrell’s Honorary Director, Dr Lee Durrell, said: "I am overjoyed with the news that Durrell has won the WAZA Conservation Award and so proud that we are the first ever recipient. It validates the efforts begun by Gerald Durrell so long ago to prove that zoos could become agents of species survival, and his firm belief that all zoos should strive towards this goal.

"Now more and more zoos and aquariums tackle conservation issues proactively and engage their visiting public in what needs to be done and why. I hope the award heralds an era of even greater commitment to conservation by our community. I am delighted that our new CEO, Dr Lesley Dickie, is able to attend the WAZA conference and accept this prestigious award on Durrell's behalf."

Gerald Dick, Executive Director of WAZA, said: “Durrell’s outstanding dedication to conservation success and long-term efforts to save species from extinction made Durrell the most obvious choice for recognition this year.

“Durrell Wildlife Conservation Trust has not only talked about conservation, but have lived that mission. In the 1970s Durrell started their programmes and in the past 40 years they have saved the surviving endemic birds of Mauritius starting with the Mauritius kestrel in the 1980s under the leadership of Professor Carl Jones.

“Durrell has restored habitats on Mauritian offshore islands and restored the herpetofauna and left a thriving NGO to lead on the Mauritius work now. Durrell has worked on the ploughshare tortoise, Madagascar pochard, Lac Alaotran gentle lemur conservation and other programmes in Madagascar. In the Caribbean Durrell has led efforts in Montserrat to save the oriole following the volcano around 10 years ago and the mountain chicken from when the island was hit by chytrid fungus. Durrell was also involved in the early efforts to save the St Lucia and St Vincent parrots and has been a driving force behind the pygmy hog conservation programme and support orangutan conservation in Sumatra.

There are numerous other projects that were taken into consideration including local work with agile frogs and the reintroduction of choughs to Jersey, and their Academy in Jersey has had several hundred people go through its doors, many of them now conservation giants in their field.

“Durrell’s staff operates 50 projects in 18 countries around the world. Durrell focuses on the most threatened species and the most threatened habitats of Madagascar and Mauritius. Rural communities depend on the same ecosystems for their livelihoods, and their approach is based on empowering these communities to lead in the protection of their local environments.

“WAZA commends Durrell for their commitment to conservation action and for serving as a prime example of how zoos and aquariums can make a significant impact.”