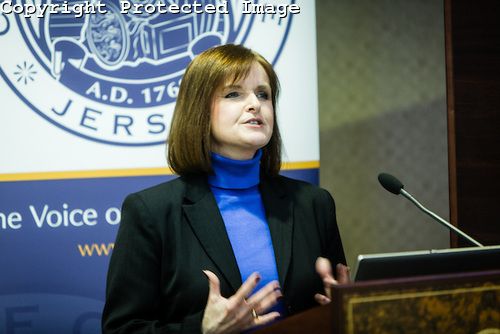 The Commercial Manager for EasyJet has warned that increased flight delays at Jersey Airport would cause the airline to take another look at its local timetables.

At this week's Chamber of Commerce lunch, the event's main speaker Ali Gayward from Easyjet, was asked about moves to demolish the flight arrivals building, which the airport authorities say is necessary in order to prevent a significant increase in flight delays and cancellations. They argue the building is too close to the runway, and so international safety regulations would restrict the movement of aircraft, if it remains where it is. Next week, Planning Minister, Deputy Rob Duhamel will consider an application to demolish the listed building.

Ms Gayward declined to comment in detail when asked about the issue by hotelier, David Seymour, in front of 257 guests at the Pomme D'Or.

But she did describe how the airline uses its aircraft for a number of different flights on any one day, so if delays on its Jersey services were happening too often, that would have an impact on the punctuality of other flights, which the airline would need to consider very carefully.

Doug Bannister, who runs the harbours and Airport for the States, says that if the demolition is rejected the regulator will impose restrictions at the Airport, including restricting planes using the taxiway while the runway is in use, and reducing the time that pilots have to make a final decision on whether to land or not as they descend – leading to more flight delays and cancellations.

And all of that, he says, will mean more disruption, potentially fewer charter flights of tourists in the summer, and more unwelcome problems for airlines who currently fly to Jersey.

He said: “Our capacity to handle air traffic will be reduced because of the taxiway issue, and that means we would have to implement flow control, which would dramatically reduce Saturday capacity.

“Raising the decision height in inclement weather will have a knock-on effect in terms of a loss of confidence in Jersey from an airline’s point of view. For many airlines, Jersey is not the only destination – so what impacts or delays a flight here can affect a whole range of other airports".