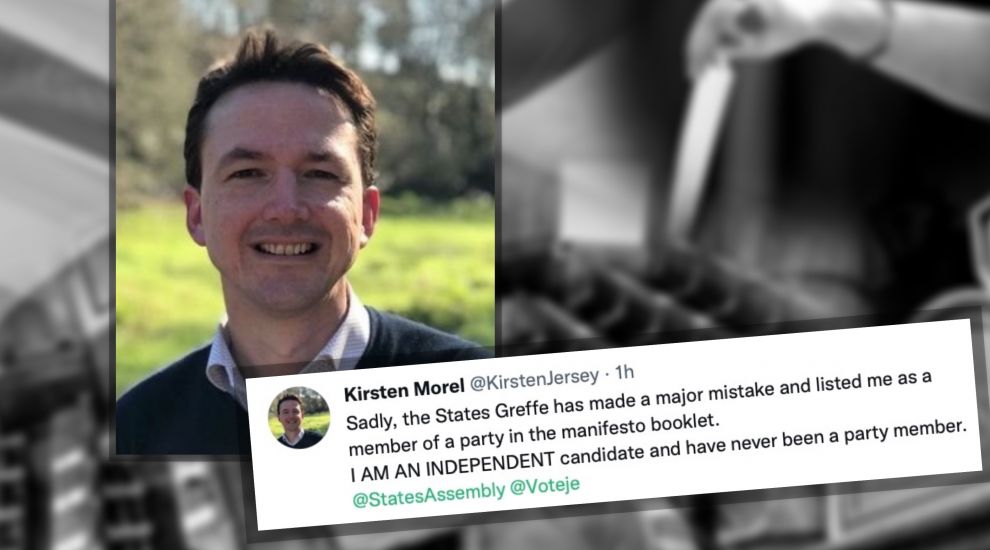 The team responsible for communications about the election have apologised after wrongly labelling a candidate as a member of the Jersey Alliance Party.

On page 21 of the St. John, St. Lawrence and Trinity manifesto booklet being distributed to households this week, sitting St. Lawrence representative and Assistant Minister Kirsten Morel has been listed as a member of the party fronted by Sir Mark Boleat.

Deputy Morel is, in fact, standing for one of four Deputy roles in the newly-formed ‘super-district’ of St. John, St. Lawrence and Trinity as an independent candidate.

In a short statement this morning, the Vote.je team said it “sincerely apologises for this mistake.”

“We are in the process of rectifying this and will send out an updated leaflet for this constituency in due course.”

Sadly, the States Greffe has made a major mistake and listed me as a member of a party in the manifesto booklet.
I AM AN INDEPENDENT candidate and have never been a party member. @StatesAssembly @Voteje

Deputy Morel this morning told Express he was extremely disappointed about the mistake.

A candidate “proud” to be independent who has “never been a member of any party”, he said he could not understand how it had come about.

Having often been asked about his party status on the doorstep, Deputy Morel said he was concerned the error could be detrimental to his campaign.

Error in the candidate manifesto booklets for the constituency of St John, St Lawrence and Trinity: On page 21, Independent candidate Kirsten Morel has been incorrectly shown as a member of the Jersey Alliance Party. https://t.co/d0aqcCWybQ sincerely apologises for this mistake. pic.twitter.com/9Qgv8h4rfQ

“I think it shows that all of this new election system has been done in too much of a rush,” he said, later adding: “If this harms my election chances, I will be taking action against the States Greffe."

Vote.je has since issued a correction on social media.

Later this afternoon, it confirmed that the whole manifesto booklet for the area would not be reprinted, but that a double-sided flyer with Kirsten Morel's correct details would be issued.

"We are re-issuing as unfortunately the majority of booklets within this constituency have already been delivered," the team explained.