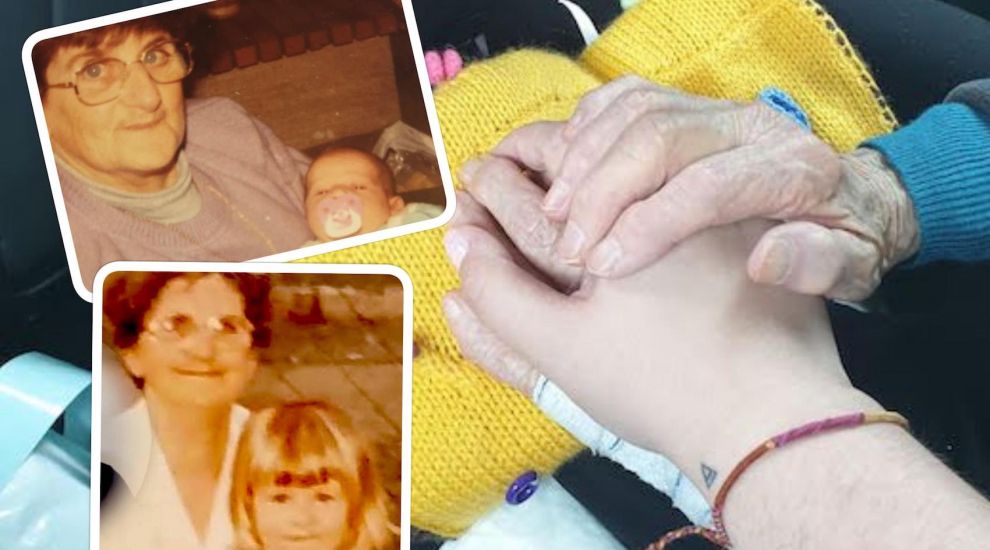 A journalist-turned-MMA fighter has opened up about the reality of slowly losing her ‘Mamienou’ to dementia, one month ahead of stepping into the cage to support others affected by the condition.

But on 9 November, the Express reporter will be dragged far out of her comfort zone, as she appears before hundreds of people to take part in a Mixed Martial Arts (MMA) White Collar fight at the Radisson.

It won't be an easy experience, but she's motivated by the challenge, and, more importantly, raising money for the Jersey Alzheimer's Association.

Elodie shares how her training journey has gone so far, and why the charity is so close to her heart...

"My first MMA fight – scratch that, my first ever fight, full stop – is exactly one month away.

Just over a month ago, I signed up for a White Collar MMA training camp with Rumble on the Rock and Brazilian Power Team. 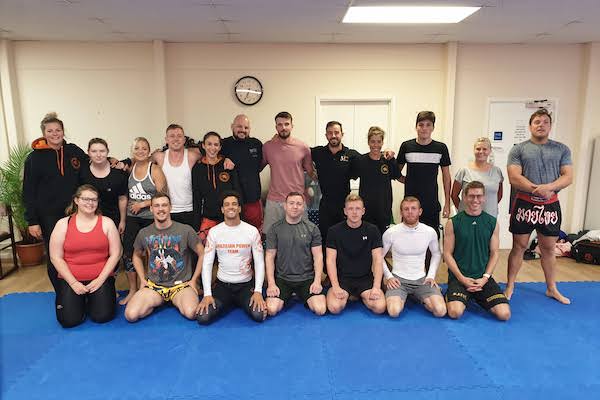 Pictured: The squad before training.

This is actually my second attempt, if you can call it that, as I signed up two years ago, but gave up after one session because - let’s not sugar coat it - it was horrendous.

But when Mike Cañas, one of the coaches, asked me if I would sign up as they were looking for an extra girl to join, I said yes.

Even though karate is a family affair – my dad was a black belt, my brother a Brown belt and my sister a blue belt – I never felt the appeal.

I enjoyed watching my siblings practice on the tatami but, being very conscious that my hand-foot coordination was abysmal, I decided to exercise my brain by reading books and writing short stories rather than the rest of my body.

Video: In the middle of training.

I’m not going to lie, my coordination is still bad and I get really frustrated when I can’t seem to get a rather simple combination the first time around - I understand quickly, but you have to explain for a while, as the French say.

My partner, Billy, had to convince me to stick with training, but I am now on week 5 and starting to enjoy it.

I'm not doing this just for the sake of getting out of my comfort zone – although that is a big part of it. 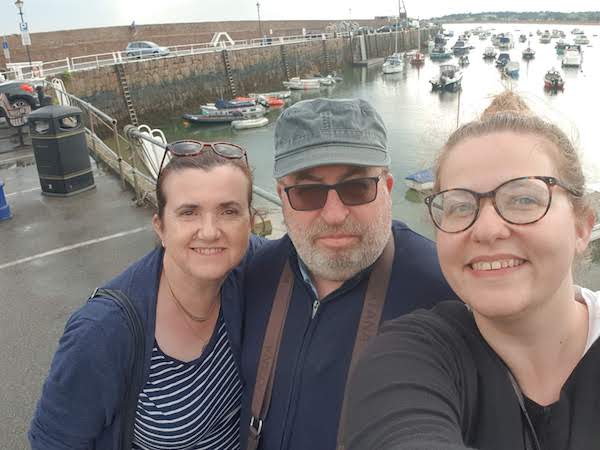 Pictured: My dad tried to convince to do karate but I refused.

I want to raise funds for Jersey Alzheimer’s Association. My nearly 95th maternal grandmother, Andrée - mostly known as 'Dédé' or, as I have always called her, 'Mamienou' - has been living with dementia for many years and it's a debilitating condition, which affects not only the individual but their family.

I spent most of my childhood holidays with her, running havoc in the playground, raiding the toy shop, baking cookies or quiches and doing crosswords

I still haven’t come to terms with her diagnosis, nor with losing bits of her to the disease.

Dementia seemed to affect her only slightly at the beginning – it was like tiny pieces being chipped away slowly over time - but, in the past year, it has been far more destructive. 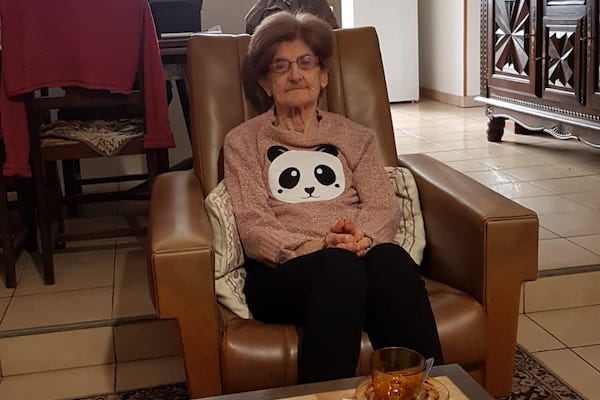 Pictured: 'Mamienou' will be 95 in early December.

In January, my gran reached the point where she was no longer able to live on her own and had to move in with my parents, with my dad acting as her main carer while my mum works full time.

Mamienou does not seem to recognise any of us anymore – not even my mum, her only child - and she very rarely talks.

She doesn't blow raspberries to kiss me 'goodbye' anymore. The only time I feel she is still 'there' is when she randomly squeezes my hand when I help her into bed.

Around May, my parents were struggling to find things she could do, as she can’t read or watch TV anymore. Keeping her calm was similarly difficult, as she was very fidgety and always needed something in her hands. 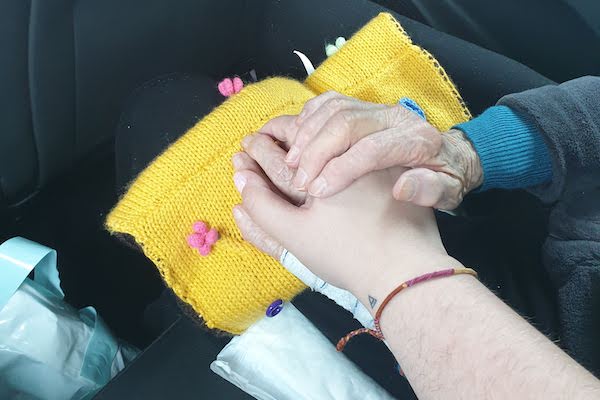 Pictured: The "twiddle muff" is a knitted sleeve with ribbons, pearls and other items sewed to it to keep the hands occupied.

I mentioned that to Sean Pontin, CEO of the Jersey Alzheimer’s Association, who kindly offered a 'twiddle muff' - a knitted sleeve with ribbons, pearls and other items sewn into it to keep the hands occupied.

From the moment I gave it to my gran, she absolutely loved it.

Five months later, she still does. It’s the first thing she puts on when she wakes up, and she is often found pulling on the different bits and bobs.

It may seem like only a small thing, but when you are faced with a loved one who can’t speak and tell you what they need or want, being able to offer some support or relief to them, no matter how little it may seem, means a lot. 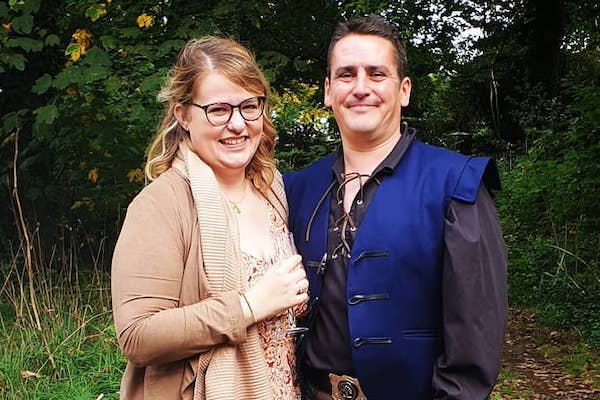 Pictured: My partner Billy deserves credit for convincing me to stick with training

Sean’s seemingly small gesture meant a lot to me, and I wanted to return the favour to the association, as the work it does is amazing.

They not only support people with dementia, but also their families, friends and carers.

They provide activites for people with dementia, helping them continue to do the things they love, stay active and in the community.

There are more and more people diagnosed with dementia every day, and people of all ages are affected. Jersey Alzheimer’s Association needs all the support it can get. 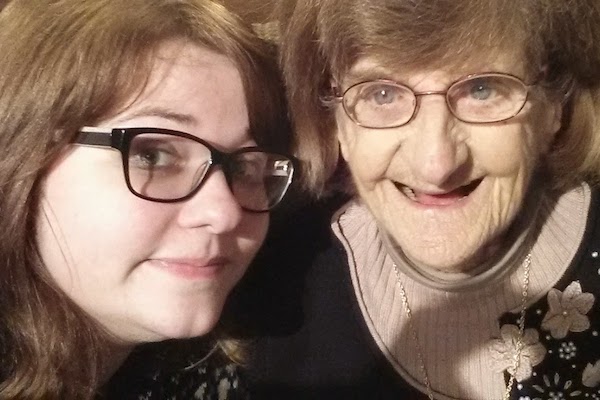 Pictured: My grand would probably freak out if she knew I was going to fight someone.

I like to think Mamienou would be proud of me for stepping into the cage but, truth be told, she would most probably be freaking out, like she did when I used to climb on frames at the playground. Nonetheless, I’ll be fighting for her on 9 November.

P.S. I need all the tips I can get for my fight, so please get in touch if you have any!”

"You are not in a typical care home"