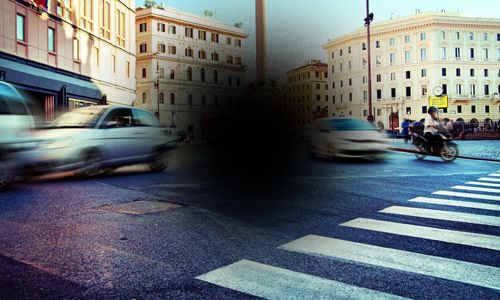 Cyclists are being warned to look out for pedestrians with an 'invisible' disability after a number of near misses on local streets.

Local charity EYECAN met with Jersey Road Safety officials last month to draw attention to the over 2,000 islanders with visual impairments, which may not be obvious in the absence of guide dogs and canes.

The organisation launched a road safety campaign aimed at car drivers together last year – but now they’ve set their sights on cyclists.

VIDEO: Michael, who has tunnel vision, shares his struggles with getting around St Helier. (Source: Jersey Road Safety)

According to Sarah Shaw, EYECAN Welfare and Advocacy Worker, people with visual impairments have been particularly troubled by the behaviour of some inconsiderate cyclists in St Brelade, St Helier and even in certain pedestrianised zones.

She told Express: “One client living by Howard Davis Park frequently experienced difficulties with cyclists cutting him up on pavements and on precincts, and cyclists jumping traffic lights at the bottom of Mont Millais at times when he was using the lights to assist him across the road.

“A cyclist recently sped past me in the Central Market. Also recently, a cyclist just avoided crashing into a mother and her young son as they crossed the road at a pedestrian crossing in David Place. The cyclist had jumped the lights.

“Many other clients have been startled as cyclists swerve around them – one cyclist even rang his bell as if he had right of way!”

“It’s not just that pedestrians with impaired sight might be struck by the cyclist, or indeed strike the cyclist if they lash out in alarm, but that they might easily stumble into an obstacle or off a pavement as they react to the shock.”

“People living with these disabilities need concentration and confidence in order to get around safely. Not only do inconsiderate cyclists risk causing accident and injury but also considerable damage to the confidence of sight impaired islanders, setting back, perhaps permanently, their independence,” she added.