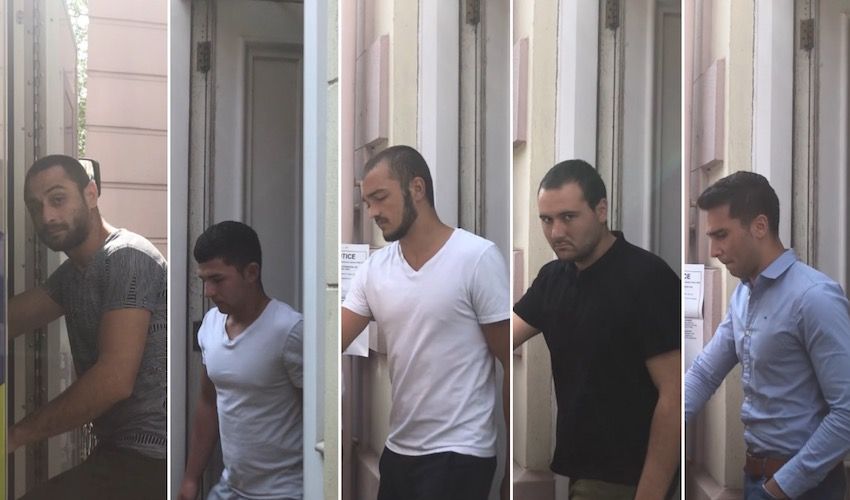 Five former farm workers have been jailed, and will face deportation, for their part in the “gang-rape” of a teenager which took place in the back of a car whilst they laughed at, encouraged and filmed one another.

Marius Adrian Dobrin (24), Dorel Stefanita Diaconu (23), Florin Ionut Calin (20), Alexandru Dobrin (18) and Oprea Stefanita Dobre (18) appeared in the Royal Court today where they were each sentenced to 10 years in prison – or youth detention depending on their age - after all being convicted of two counts of rape against the same victim.

The five are all Romanian nationals and came to the island to work on a farm in Trinity.

Although not all of them physically carried out the acts, they are each considered by the Court to be jointly responsible for the rape of the young woman – responsibility they all accept, having pleaded guilty.

Pictured: The five men leaving Court after hearing of their sentence.

Summarising what took place on 16 December last year, Crown Advocate Simon Thomas – appearing for the prosecution – described the incident as a “gang-rape.”

The Court heard that the young woman met the five men whilst she was out at the Havana night club, having been drinking. She was seen dancing with and kissing the eldest of the farm workers, Marius Dobrin, and later left with him at closing time – followed by the other four men.

The Court heard that it was after the group got into the car together that the woman started, “...blacking out and was not fully aware of everything around her,” – this, she later explained in her statement to Police, was not uncommon for her after she had been drinking.

During this journey she realised that she was in partially undressed before the car pulled up at Les Platons car park on the coast in St. John, when she was laid down on the back seat and recalls being raped by multiple men.

Pictured: (Left to right) Marius Dobrin, Dorel Diaconu, Oprea Dobre, Florin Calin and Alexandru Dobrin have all been sentenced to a decade behind bars.

In her witness statement, she says: “…I thought I was going to get murdered, that was the last thing I wanted to do. I was terrified… I remember I couldn’t move, there was a guy constantly on top of me.”

The victim also said that she didn’t know exactly how long the ordeal lasted, but that it “felt like a lifetime.”

Two of the men, Diaconu and Calin, recorded a series of short video clips throughout the incident which were watched by the Bailiff Sir William Bailhache, presiding, and the Jurats in private during the sentencing hearing.

Noting how the victim’s personal statement describes “the profound emotional and physical effects that this incident has had on her and how she views the world and other people,” the Crown Advocate then made his recommendation for sentencing.

He asked the Court to impose a jail sentence of 10 years for each of the men, as well as a restraining order to prevent direct or indirect contact between the five men and the victim.

He also recommended that, in the Crown’s view, the minimum amount of time that the Romanian nationals would have to stay on the Sex Offenders’ Register should be 15 years after their conviction. Crown Advocate Thomas also made a recommendation that the five men be deported on completion of their sentence.

Pictured: The five were sentenced in Jersey's highest court.

The five men’s lawyers took a collective approach whilst addressing the Court, with each Advocate focusing on a different aspect of their clients’ case.

Advocate Sarah Dale, representing Marius Dobrin, argued that the Crown had over-emphasised several aggravating features in the case as well as speaking of the men’s good character and “strong work ethic”, making particular reference to her client’s “commitment” to his “young family” in Romania.

Next, Advocate Francesca Pinel, representing Dobre, challenged the legal authorities used by the Crown to support their recommendation for sentencing. She also urged the Court that her client’s young age should warrant a reduced sentence.

Advocate Chris Hillier, representing Alexandru Dobrin, acknowledged that the incident was “abhorrent”, but made the case that there was no evidence the men “targeted” the young woman, nor that they planned the offence.

Advocate Luke Sette, representing Diaconu, promised on behalf of his client that “he’ll never behave this way in the future.”

Advocate Michael Haines, representing Calin, told the Court that his client had written a letter of remorse to the victim showing that “he accepts unequivocally what he has done to the complainant” and that “he has inflicted great suffering and pain” on her.

Overall, the defence lawyers emphasised their clients’ good characters and extended the men’s apologies for their behaviour to the Court, the victim and her family. However, in the main, they argued that the Crown’s recommendations both for prison sentence and the minimum amount of time their clients would have to stay on the Sex Offenders’ Register as being “too high." They did not oppose the recommendation for deportation, nor the imposition of a restraining order.

The case was heard by Jurats Dulake, Christensen, Crill, Ramsden and Thomas who retired to consider their decision on sentencing.

Handing down the sentence, the Bailiff described the offences as “appalling” and that they call for “significant custodial sentences.” He then imposed a prison sentence of 10 years on each of the men.

They must also remain on the Sex Offenders’ Register for a minimum of 12 years.

The full reasons for the Court’s decision will be included in a written judgment handed down at a later date.