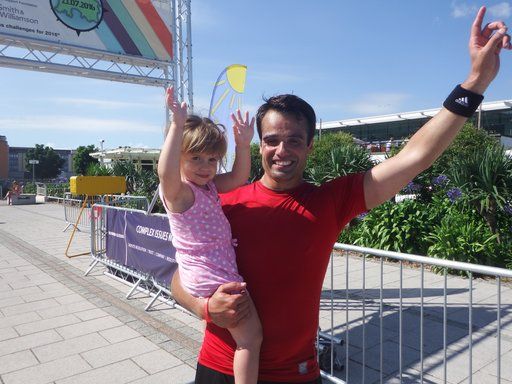 Investment banker Joel Graves, pictured with his daughter Georgia, was first over the line in the Round Jersey Challenge, completing the gruelling 48-mile course in only eight hours, 41 minutes, 15 seconds.

Mr Graves, who is an Assistant Director for Smith and Williamson International, admitted he found the going tough as the temperatures hit the mid-20sC and the sun broke through late on.

“It was hot, very hot,” said Mr Graves. “It was tough towards the end because the sun was pretty fierce, but great fun. Hard, but fun. I’m knackered!”

Round Jersey Challenge from Bailiwick Express on Vimeo.

All proceeds from the challenge went to the Grace Crocker Family Support Foundation - and there were five disciplines in which competitors could take part - running, canoe/kayak, rowing, swimming and stand up paddling.

The paddlers were even followed by a pair of dolphins in this amazing picture below. 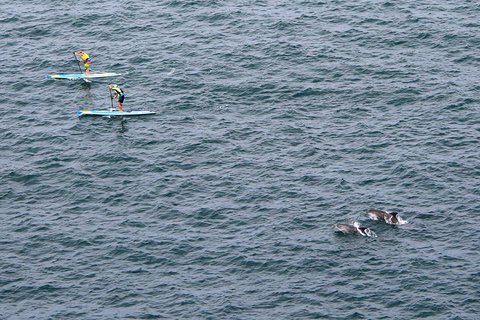 In the rowing, mother and daughter team Enya and Rosemary Satchwell, pictured below, were first over the line in the women’s event in a time of five hours, 30 minutes and 38 seconds. 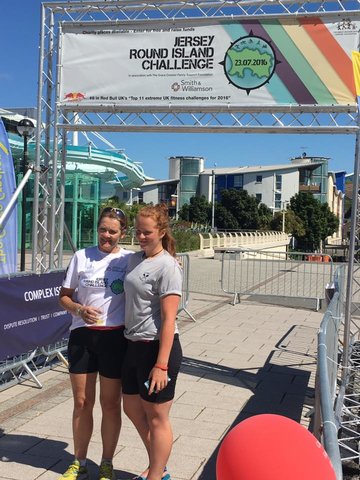 The running relay winners were EP2 in a time of six hours, 10 minutes and 13 seconds, while Steve Jones was victorious in the canoe/kayak section, winning in a time of four hours, 57 minutes.

The Grace Crocker Foundation was founded in 2011 by Sara and Nigel Crocker, in memory of their daughter Grace who died in September 2009, aged just 11 weeks.

Grace was born with Hypoplastic Left Heart Syndrome and had open heart surgery when she was just 5 days old.

Her family lived in Jersey and so they had to move to Southampton for three months whilst Grace recovered from her surgery.

As a result of their own experience, Sara and Nigel set up the foundation, with the aim to help other families from Jersey who need to spend time in the UK whilst their child receives medical treatment in hospital.