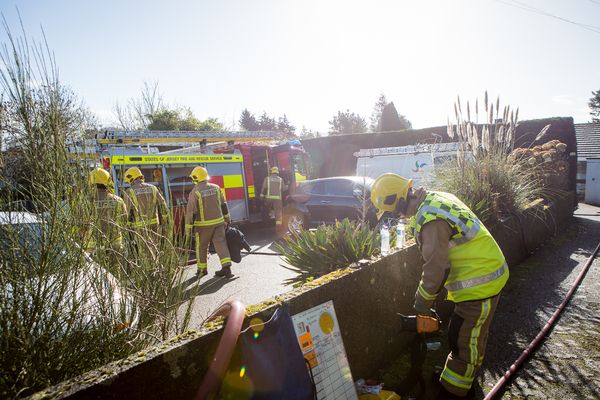 Firemen have rescued two elderly people from a fire in St Peter after a dramatic emergency call this morning.

The two people – a brother and sister – were rescued after firefighters were called at around 9 am this morning to reports that a woman was trapped in a burning room. Both have been taken to hospital and the woman is being treated for smoke inhalation.

Station Commander Clive Russell said that the cause of the fire was not yet clear, but that there had been extensive smoke damage to the bedroom. He said that in the dramatic emergency call, the brother had reported that there was smoke filling a hallway from under the bedroom door and that his sister was trapped in the bedroom.

“It was not a particularly big fire but any fire looks big and serious if you are in the room,” he said.

“The fire damage is not that great, it was contained to the room, it was the smoke that was particularly perilous in this case. We sent two appliances immediately because it’s all the way out in St Peter and it’s a long travel distance and we sent the third appliance as soon as we could.

The bungalow where the fire happened is around the corner from the Western Substation, which is unmanned during the day.