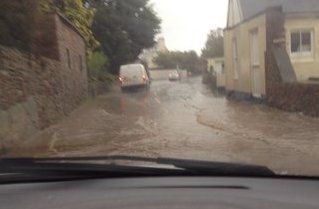 The school run was a very soggy one for parents and children heading to schools in the northern parishes this morning after they were hit by a cloudburst.

The heavy rain might not have lasted long but it lashed down with such force it caused flooding in parts of St John, St Mary, Trinity, Greve de L’ecq and St Peter’s Valley.

Transport & Technical Services’ drainage specialists and sweepers were called out to get rid of leaves that had been blown in the high winds into the gulleys and had blocked drains.

There was little time to prepare for the downpour, the Met Office tweeted heavy rain was imminent just half an hour before it came down.

The Met Office Duty Forecaster John Searson said: “We did have loads of rain yesterday and basically our radar indicated that some very heavy rain was moving towards the Island this morning.

"We tweeted at about 7am that some heavy rain was going to affect the Island, the wind increased from a force two to a seven within a couple of minutes and heavy rain followed. What happened is as the air blew across the island it was being forced upwards – the wind increased to 30 knots, and coming up against the cliffs it was forced up even faster.

“What our weather radar recorded was a rainfall rate at 7.30am of 72 mm per hour in the St John area – but it was gone within five minutes.”

Storms are set to drench the southern parts of the UK today. Up to 40mm of rain is expected to fall in large swathes of the country stretching from Cornwall to East Anglia as a weather front sweeps across from the continent, bringing gusts of up to 45 mph to batter parts of the coast.

The Met Office has issued yellow warnings for the south west, south east and east of England and warned drivers to watch out for water flooding parts of the roads.

The Island can expect a quieter day tomorrow with just a slight risk of a shower but more rain is forecast for the Island on Wednesday.