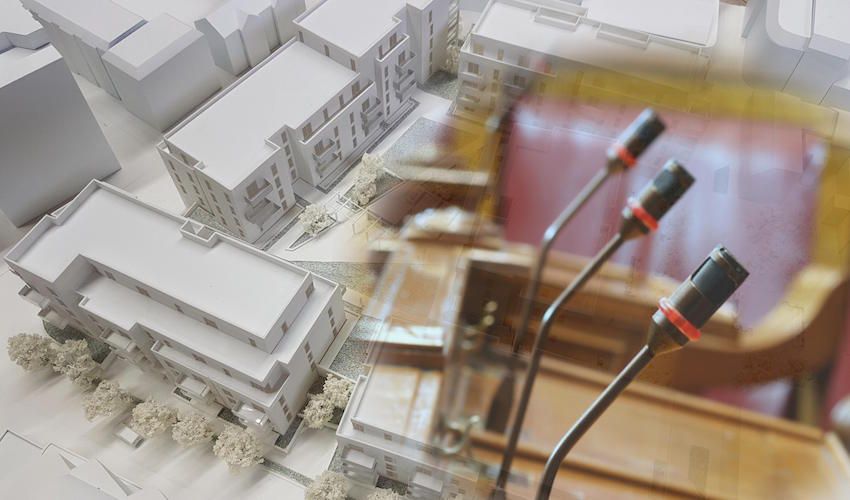 The uncertain fate of the St. Helier site previously earmarked for social housing, but now touted as a potential new States HQ, will be decided today as States Members prepare to debate Ann Court’s future once and for all... But how did it get to this point in the first place?

Long-standing plans to redevelop the Ann Court car park and its surrounding area to provide 165 homes were put on hold after questions about how best to use the site were raised by the Chief Minister.

This has led to a review of its feasibility as a location for the new government headquarters as the States seek to consolidate their office space and bring all employees together under new CEO Charlie Parker's 'One Gov' plans.

However, in calling for the area's best possible use to be analysed, in line with plans for the development of the North of town, the £30million housing project due on the same site has been brought to a standstill - and is now accumulating £6,500 in losses for every week of further delay on the development.

In the face of these losses, a growing housing need and mounting pressure on the Affordable Housing Gateway waiting lists, Deputy Steve Luce has brought a proposal to allow for Treasury Minister Deputy Susie Pinel to sign off on the rest of the funding which will see construction commence on the Ann Court site.

Pictured: Treasury Minister Deputy Susie Pinel didn't sign off on the loan for Andium to proceed with the Ann Court development as anticipated.

Ahead of today’s debate that will seal the site’s fate, Express takes a look at the series of events which led to a fully-approved development returning to the States Assembly...

In May 2017, plans to develop the Ann Court site into social housing, a public amenity space and shopper parking were announced. The plans, brought by the previous Council of Ministers, were costed at £30million with construction due to be completed by 2021.

The States social housing provider Andium Homes, who were delivering the project, were due to sign the building contract in November of last year, having already substantially progressed their plans for the site. At this point, Andium had spent £6.5million on the project - more than a fifth of the total £30million budget.

Despite approval for the project having garnered support from the previous States Assembly, the Housing Department and the Planning Committee, the contract was never signed due to Chief Minister Senator John Le Fondré wanting a review of what the site is used for.

Email correspondence made public by a Freedom of Information (FOI) request earlier this month shows that a dialogue about the future of Ann Court between the Chief Minister, States Chief Executive Charlie Parker and Constable of St. Helier Simon Crowcroft was taking place in early October.

Rumours about the project being scrapped that started to circulate in mid-October appeared to intensify when Treasury Minister Deputy Susie Pinel did not put her signature on the loan to develop the site as anticipated.

Pictured: Email correspondence made public by an FOI request shone a light on internal dialogue over the Ann Court site.

This caused progress on Ann Court as a housing site to grind to a complete halt as developers had neither the released funds nor the signed building contract to proceed. Since the loan wasn’t signed off at the end of November, the development continues to incur £6,500 losses in lost rentals and interest charges.

Bringing this troubled past to a head, the future of the site is now returning to the States Chamber where Housing Minister Senator Sam Mézec and the Chief Minister are set to clash over what they think the site should be used for.

Deputy Luce’s proposition, which asks for the Treasury Minister to sign off on the funding for the Ann Court housing development, calls for States Members to “stop the dithering, indecision and delay and support the immediate development of this site, as already approved.”

In his response expressing support for the Deputy’s proposal, Senator Mézec says: “…A delay in the development of Ann Court is unacceptable and would prevent the delivery of the number of new homes to meet the island’s housing requirements, as well as hold back the regeneration of the North of St. Helier.”

Pictured: Housing Minister Senator Sam Mézec said that delaying the Ann Court project would be "unacceptable" in the face of the island's housing challenges.

This comes just after the publication of an independent report indicating that, if current migration trends continue, Jersey will have to provide 7,000 new homes by 2030 to cater to the island’s housing needs.

One States Member who will be opposing releasing the funds for the housing development is the Chief Minister himself.

In Senator Le Fondré’s comments on Deputy Luce’s proposition, he writes: “…Yes, we can proceed with delivering housing on this site, but that is a short-term fix to a long-term problem. It is not strategic to do so where we are able to create the opportunity to deliver more housing overall, increase the efficiency of our public services, and provide a more sustainable and revitalised urban environment.

“This government is still picking up the pieces of short-term thinking in the past – we need to be longer-term in our thinking, swayed by evidence and the best interests of our island and future generations.”