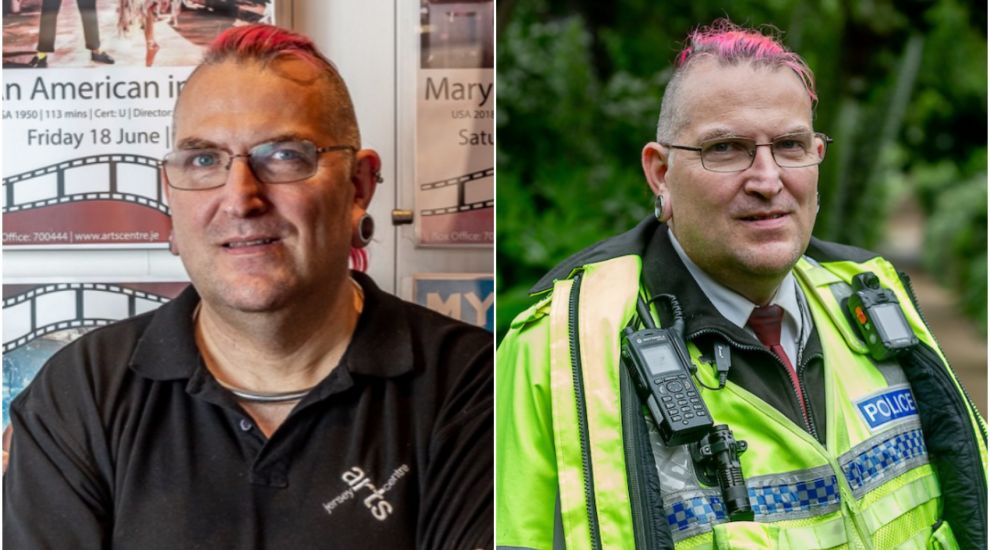 Many wonder why an island this size has no fewer than 13 police forces. One way to answer that question is to think about the sense of community Jersey is well-known for.

Those that give up their time to serve their community certainly believe in that, even when they already lead hectic lives.

One of those is Steven Laffoley-Edwards, the Chef de Police in St. Saviour, who is also the Deputy Director (Stage and Events) at the Jersey Arts Centre.

He is also a staunch advocate of the island’s Parish Hall Enquiry system, something he frequently champions when it is challenged in the media, as it keeps so many minor offences out of the higher courts – an asset he believes is particularly important for young people.

Express went to meet a man for whom attention to detail, and a refusal to accept half-measures is as important as standing out... 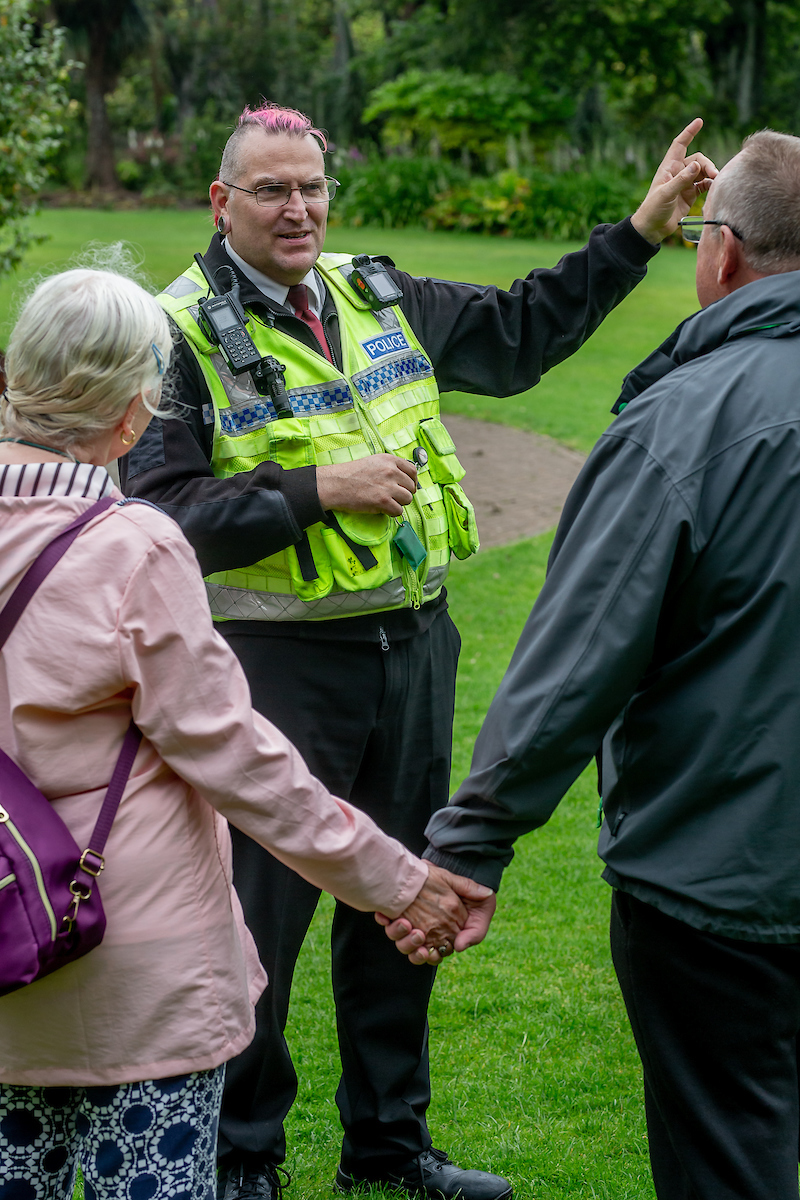 Pictured: Steven explained that when they say Honoraries work from nine to five, they mean 09:00 to 05:00.

It’s Sunday evening, just after 18:00, and the beach is packed. A few days earlier, Express had been chatting to Steven at the Jersey Arts Centre during what was supposed to be a day off. Here he was again, just about to drive home to finally sit down for Sunday lunch, after being called out as the Duty Centenier.

Steven has always had a sense of service. That started in his local Cub Pack. Years later he earned his Queen’s Scout Award. The discipline he learned to not settle for half measures goes with him whenever he embarks on a new project.

“When we interview people, we say we work nine to five,” which means 09:00 to 05:00 he explains, showing me the spreadsheet that controls the crew rota at the Jersey Arts Centre. The only guaranteed days off are Christmas Day, Good Friday and Easter Sunday. Other than that, he and the team are always on call. 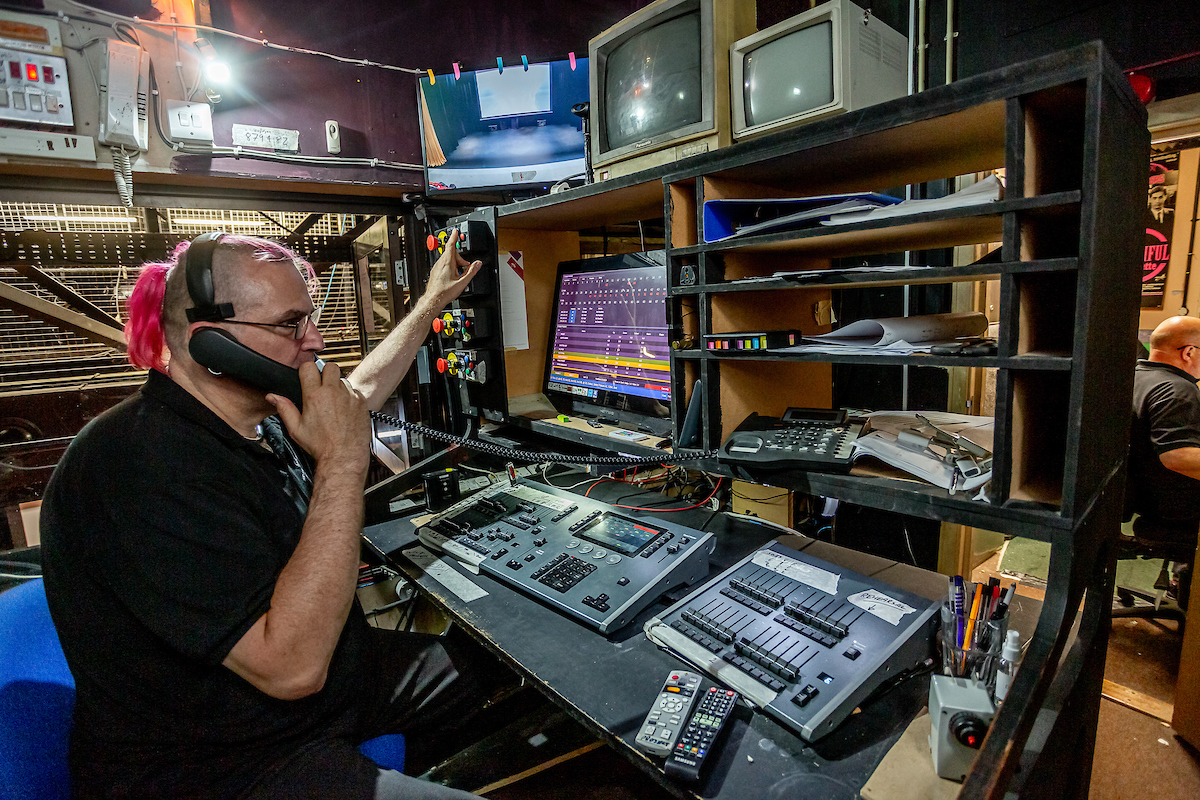 Pictured: “There’s something about putting it all on, and nobody knows you’ve done it."

There were 36 performances to manage in June and the day can range from a company coming to check the air conditioning system, a band needing to do a sound check to a film screening in the evening. You need to enjoy working there.

“Nobody else in my family was theatrical. My dad was a nightclub manager. But I was always putting on shows at school and I wanted to be on the tech team. I wanted to work in the West End but being from the Midlands that was a bit of a joke until I ended up working at the Prince of Wales Theatre, two days before my 20th birthday.”

Getting jobs in the theatre was based on word-of-mouth and at the Prince of Wales Theatre, Steven worked on the Andrew Lloyd Webber musical Aspects of Love for just over a year, becoming Head Flyman within six months, making him one of the youngest ever heads of department in the West End. He was also responsible for building the set.

“There’s something about putting it all on, and nobody knows you’ve done it. At Aspects there were 19 people doing the curtain call; but there were 256 people every night putting those 19 people on stage.

"You'd be going home on the tube listening to people talking about a show you had just worked on saying how wonderful it was, and wasn't Michael Ball fantastic. And they have absolutely no idea about that whole army of people coming in everyday making sure it all runs smoothly. There’s something really satisfying about that.” 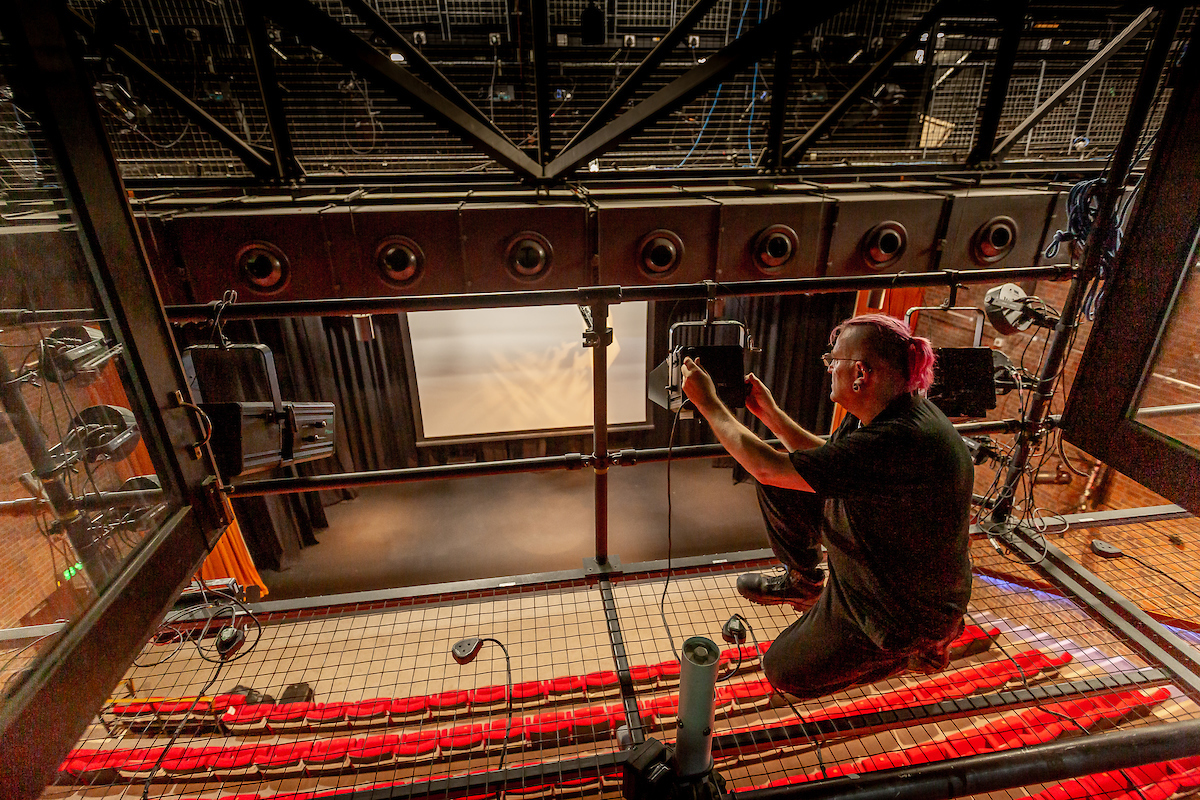 Pictured: "In theatre you need something, whether you are an artist or a member of the crew, that gets you remembered. And when people need somebody for a show and they are looking at who’s available, someone will say, ‘Have you phoned Pink Steve?’"

Steven joined the Jersey Arts Centre in 1998. On his first day - or rather night - it was the last night of the JADC panto.

He had been playing the dame and while everyone else went off to the party, he was given the keys to lock up. Eleven years ago, he was promoted to Deputy Director, but that hasn’t stopped him doing what he loves, which is just about everything in a theatre, including sweeping the stage.

There is a correct way to do it - anyone who has seen Stephen at it will know this; few will have ever seen anyone sweep so meticulously.

“It makes sure the stage is swept entirely. And also, depending on the surface on the stage, you can leave smear marks where the brush has gone. If it’s random, the lights will bounce into the little grills of dust.

"But if you’ve swept it in the pattern, the lights will bounce uniformly across the stage. It's the same with mopping. It’s a bit like bulling your boots in the Army. It doesn’t help you fight any better, but if I saw a crew member come on a tour and they swept the stage and I saw them do that, I’d have confidence that they had been trained well and I can ask them to do something else.” 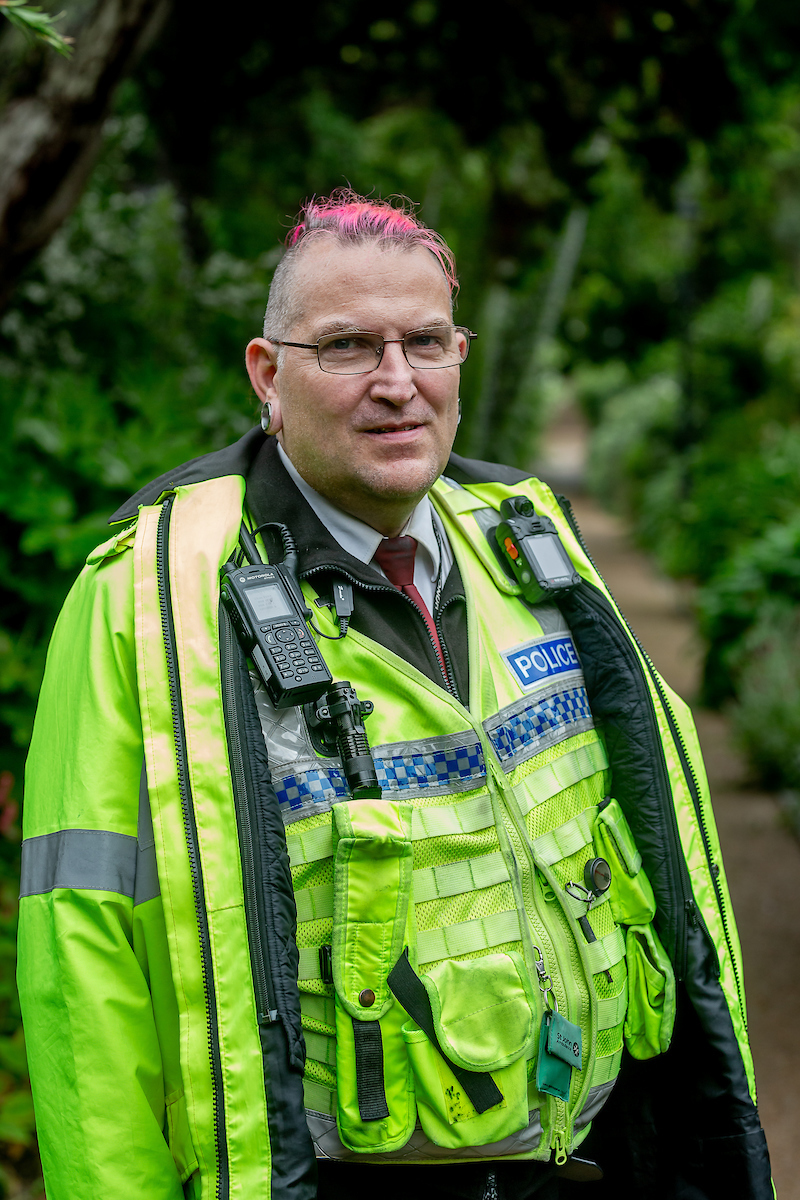 Pictured: "This isn’t a points scoring thing, it’s me, that’s who I am. You take me or leave me.”

The attention to detail goes with the long hours. So how does he do all that and head the Parish police force? When first asked to join by St. Saviour Constable, Sadie Le Sueur-Rennard, he was still President of the Kennel Club of Jersey, and had to say he was too busy. The minute he stepped down after seven years as President, he was handed the forms, and joined the St. Saviour Honorary Police.

As we know, Steven doesn't do half measures, and before he knew it, he’d been promoted through the ranks to Chef de Police. His distinctive pink Mohican was no barrier.

“I’ve had that for 35 years or so.” It was neatly tied when I was speaking to him, it can be spiked, just not when on duty.

“I don’t think that should be a restriction for what you do. Before joining the Honorary Police, I had a meeting with the Attorney General to say, ‘Look, this is me. Is there any reason why I can’t be an Honorary Police Officer?’ We are elected by the Parish and if the Parish has confidence in the fact that you are an upstanding member of the community and willing to do the work you can be elected.”

It’s taken a bit of time for the courts to get used to it, but he takes his earrings out, wears a suit and a tie and shows due respect. But he won’t get rid of the Mohican because, he says, it’s his.

“Would you turn around to a female Advocate and say you can’t wear any make-up, and can you take all your jewellery off? Why would you do it to someone who is male? This isn’t a points scoring thing, it’s me, that’s who I am. You take me or leave me.” 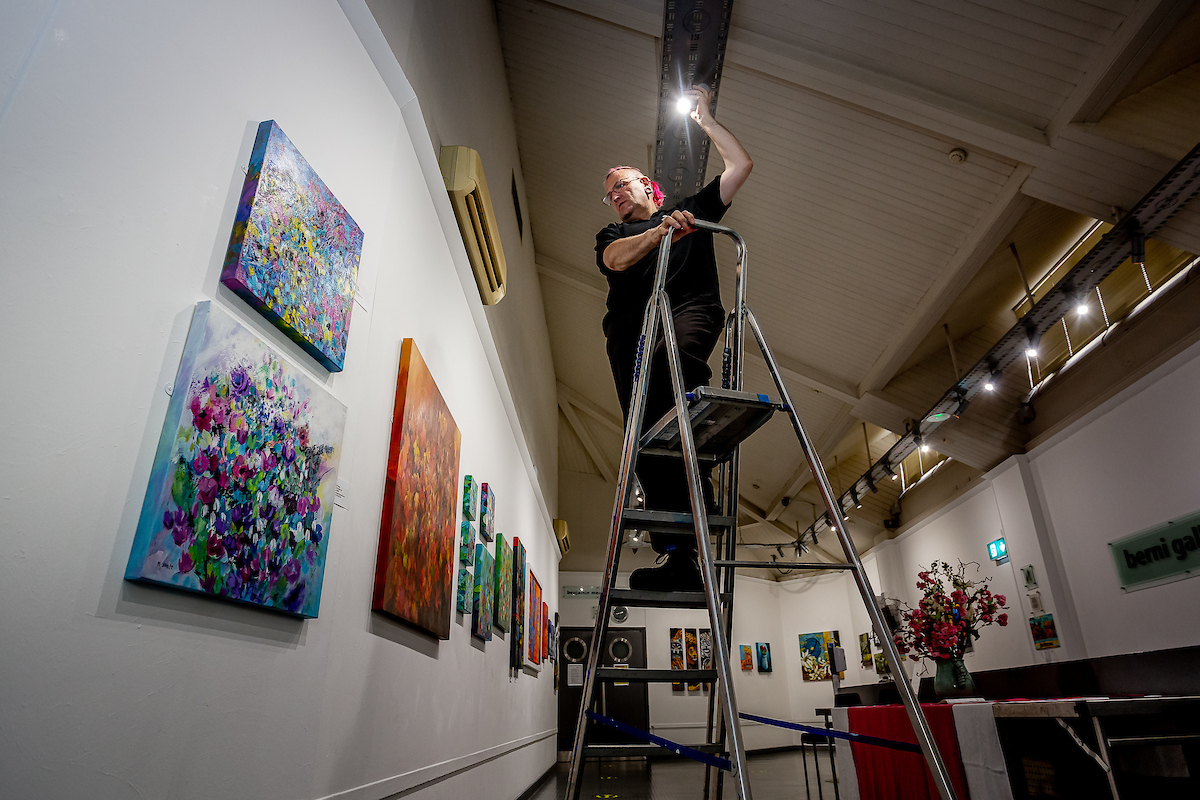 Teaching scuba diving is another of Steven’s activities. He talks about the feeling of fulfilment of seeing people who were scared of getting into the water lying on the seabed watching fish.

“Anything you can do to open peoples’ doorways to something else has got to be a good thing. All three of those things, the police, the theatre and the scuba diving, are those same doorways. Whether somebody wants to go through the doorway is entirely up to them.”

And thinking of doorways, we start talking about the Honorary Police and young people. Stories about young people and anti-social behaviour never seem to be out of the news, but Steven says Jersey’s unique Parish Hall Enquiry system often gets overlooked when people comment.

“We have this system in Jersey where we say yes, we think you’ve made a mistake, but there is a better way than sending you to prison or a heavy fine. It works very well with youth. Why should someone who is 17 who’s been given a joint, and has forgotten he has got it behind his ear when he gets stopped by the police, go to court? He ends up getting a conviction for drugs and that dashes his hopes of joining the Army because they will just look at it as a conviction for drugs.

"They won’t know it was a stupid mistake by a 17-year-old. People make mistakes. People speed, or park in the wrong places. How many people check the back of their car that their lights are working? That's a prosecutable offence. I think the Parish Hall Enquiry level is so important for dealing with before people become criminals. There’s lots of things people do all the time that are against the law.” 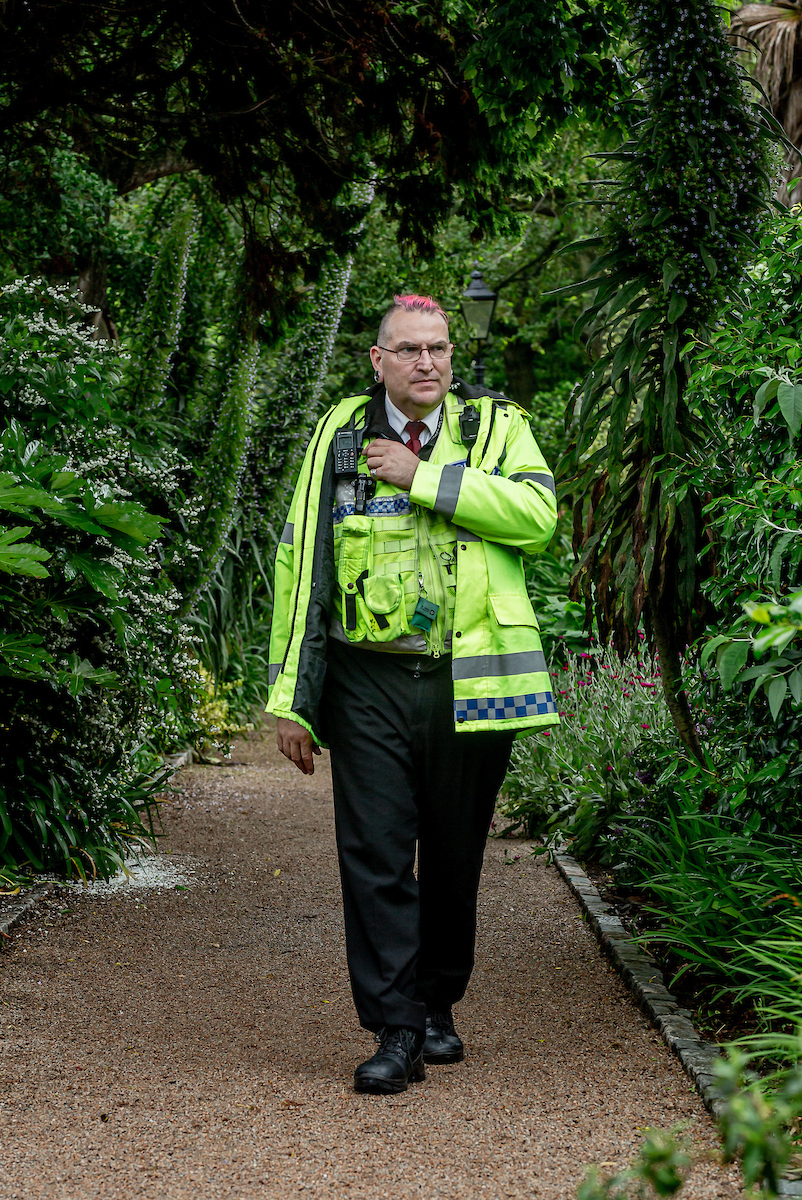 Pictured: "Why should someone who is 17 who’s been given a joint, and has forgotten he has got it behind his ear when he gets stopped by the police, go to court?"

Sometimes the system needs to take matters further, depending on the seriousness of the offence, but Steven believes the success of the community policing model is down to how the community looks after itself.

“Who else are we going to live with? We’ve just had a group of youths who’ve caused some damage. It was suggested, because I can’t enforce it, that they should all chip in to provide some money so that the gentleman could do the repairs. Every single one of them did so. Each parent made them earn the money. It wasn’t just, ‘Here you are, here’s 50 quid.’ They now realise there’s a consequence to that action which was just a stupid schoolboy thing in the summer holidays.”

If you are wondering why pink is Steven’s colour of choice, there are practical reasons: it stays in longer and, while he has had it in orange, blue and green (even multi-colour for Joseph and his Technicolour Dreamcoat), it keeps returning to pink.

“I had it black from the age of 16 but I went to London and because of [the set build] for the show at the Prince of Wales, everybody was wearing black, and it became an identity flag.

"In theatre, you need something, whether you are an artist or a member of the crew, that gets you remembered. And when people need somebody for a show and they are looking at who’s available, someone will say, ‘Have you phoned Pink Steve?’ rather than ‘Have you phoned John?

"You are at the top of the list because you have stood out long enough. Then all you’ve got to do is back that up with quality and output.”