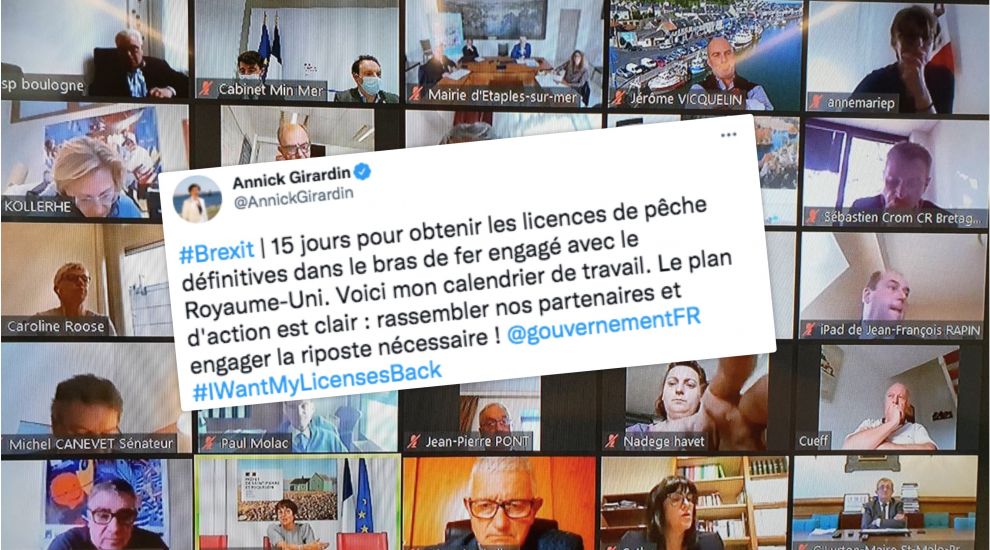 France’s Maritime Minister says she will be meeting with EU fishing leaders in Luxembourg next week to devise a campaign to punish Jersey and the UK as part of her 15-day “plan of action” to “get my licences back."

One day after raising the Channel Island power cut threat again, French political officials yesterday came together to discuss tactics and potential retaliatory measures if Jersey, Guernsey and the UK don’t provide every one of the desired post-Brexit fishing licences.

A document shared in yesterday’s meeting of French regional representatives and mayors identified the need to provide data about where boats had fished previously under the licensing regime as a key “blockage."

It said that smaller boats under 12m were struggling because they often lacked tracking systems, so France had tried to provide alternative justifications.

Following the meeting, Minister of the Sea Annick Girardin did not reveal exactly what retaliatory measures were being discussed but simply wrote: “We are determined to succeed. #IWantMyLicensesBack [sic].”

At the meeting was European Affairs Minister Clement Beaune, who on Tuesday alluded to cutting electricity to the Channel Islands again,

Meanwhile, President of the Hauts-de-France fishing committee Olivier Lepretre, who met with Mme. Girardin last week, this week suggested “blocking the port of Calais and exports to the United Kingdom for the period leading up to Christmas."

Whatever form such retaliatory action takes will be revealed by the end of this month, according to Mme. Girardin's 15-day bid to “obtain definitive fishing licences in the standoff with the UK”, which she made public for the first time yesterday.

Having already launched a "communications offensive" and held various Ministerial meetings in line with the plan, the next steps are:

“The plan of action is clear: assemble our partners and initiate the necessary retaliatory action!” Mme. Girardin said.

French MEP and President of the European Fisheries Committee, Pierre Karleskind responded by pledging his support to the campaign, adding that he had spoken to the Fisheries Commissioner earlier in the day.

As tensions continue, France is offering fishers compensation of up to 70% for losses resulting from licensing issues in the short-term.

In the long-term, she said that France would have a voluntary “fleet exit plan” in place by early 2022 for fishers that depended on British waters but wanted to leave, and a €100m stimulus plan to develop the fishing industry.

Posted by Danny Moisan on Oct 7th, 2021
imagine if we we had a Government leader like Maggie Thatcher? instead of the nodding dog politicians of today!
Posted by Scott Mills on Oct 7th, 2021
and Jersey still thinks it's French, and let the cheese, ham and jam people come to jersey to sell their produce I think this will end in tears. Foggy beaches today.
Posted by Robert Gabriel on Oct 7th, 2021
Jersey relies on France for over 95% of it’s low cost electricity. Whilst Jersey does have to capability to generate enough electricity to supply the island with power no one should be in any doubt about how expensive that will be. Regrettably, and despite all the hubris emanating on and off island Jersey will quickly find that in a battle of wills with France they hold the upper hand!
Posted by Roy Dean on Oct 7th, 2021
Jersey is independant of France and not part of France

Forget that and you should disband the Jersey Govt
Posted by Martin on Oct 7th, 2021
The FACT that Jersey issues licences SHOWS it is Jersey waters & a licence is something you earn not a gratuity or an entitlement!
Posted by Peter Huntingdon Bewers on Oct 7th, 2021
When we learn that the previous agreement with the French took Ten Years to negotiate we cannot expect to sort this out in a few Months, It appears very one sided and unfair for the Fishermen of Jersey but what is wrong has continued for a long time and will not be put put right easily if ever.?
Posted by Keith Marsh on Oct 7th, 2021
It seems like Annick Girardin is getting ready for war.
Not the most sensible way to get what you want ~ She and her fishermen have to remember what's gone is gone; it is a new era, new rules and yes Jersey will issue licences to whom it wishes and it can and will impose conditions on such licences.
Direct talk is better than GUNBOATS, but the latter can be arranged.
To place a comment please login Login »