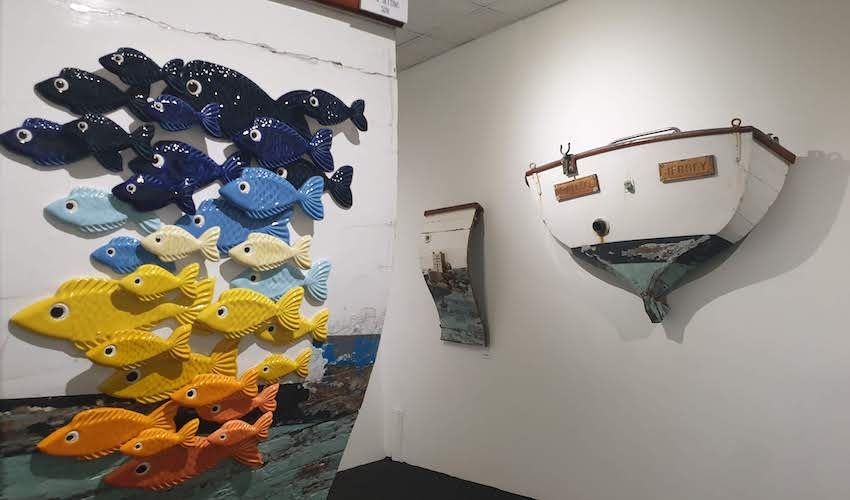 After sailing around the island, a 22ft classic sailing yacht saved from the incinerator is embarking on a new journey as the backdrop to a colourful collection of ceramic fish.

To celebrate 10 years of creating coastal ceramics, Jane James has decided to add her trademark shoals to parts of an old sailing yacht called ‘Ranzo' for 'Shipwrecked' - her largest exhibition to date, hosted at her Commercial Buildings-based studio.

A 22ft, 4 tonne, Bermudian rigged vessel, Ranzo was built in Woodbridge (Suffolk) in the early 1930s and was brought to Jersey in 1936 after being bought by Vivian Richardson and Douglas Hall the following year. They owned the boat for more than 35 years, taking it for regular sailing excursions around the island and to the Ecréhous with family. 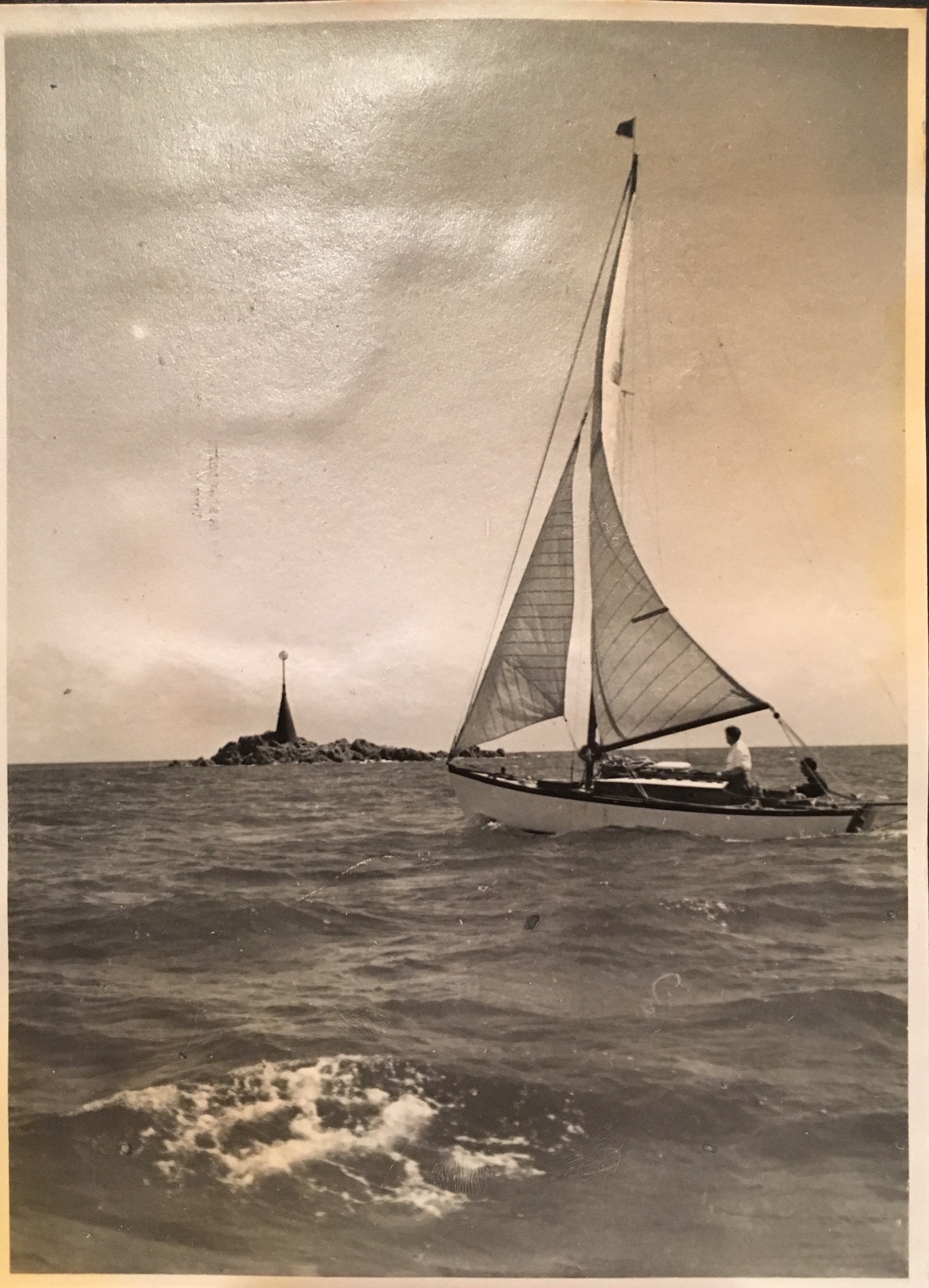 Pictured: Ranzo was built in Woodbridge (Suffolk) in the early 1930s.

After its sale in 1972, Ranzo was owned and loved by many local families before sadly falling into disrepair.

While it was destined for the incinerator last year, Jane swooped into recycle it and use it as a canvas for her artwork, thus turning “ash into art.”

Ranzo sailed into Jane’s life while she was working on another boat that had been cut up and left on the side of the harbour in St. Aubin. With driftwood being her preferred canvas, Jane is always on the hunt for more. 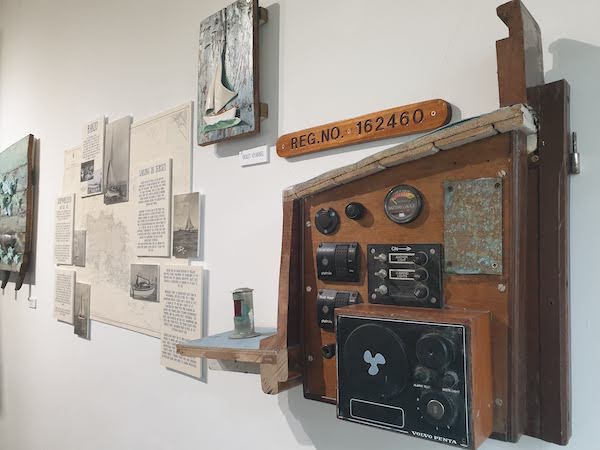 Pictured: One corner of the exhibition is dedicated to Ranzo's history.

“I have been doing this work for 10 years and with my husband Mark and my daughter we have scoured the island for splinters of drift wood,” Jane explained.

“Every spare moment is spent on the beach looking for driftwood. We use different types of wood, but driftwood is our ultimate gain.

“It’s natural and we throw and burn so much wood away. For me it’s about cleaning the beach and I love the colour, the history and the shape of driftwood. New wood just doesn’t have the same appeal. As a canvas, driftwood works really well for me.” 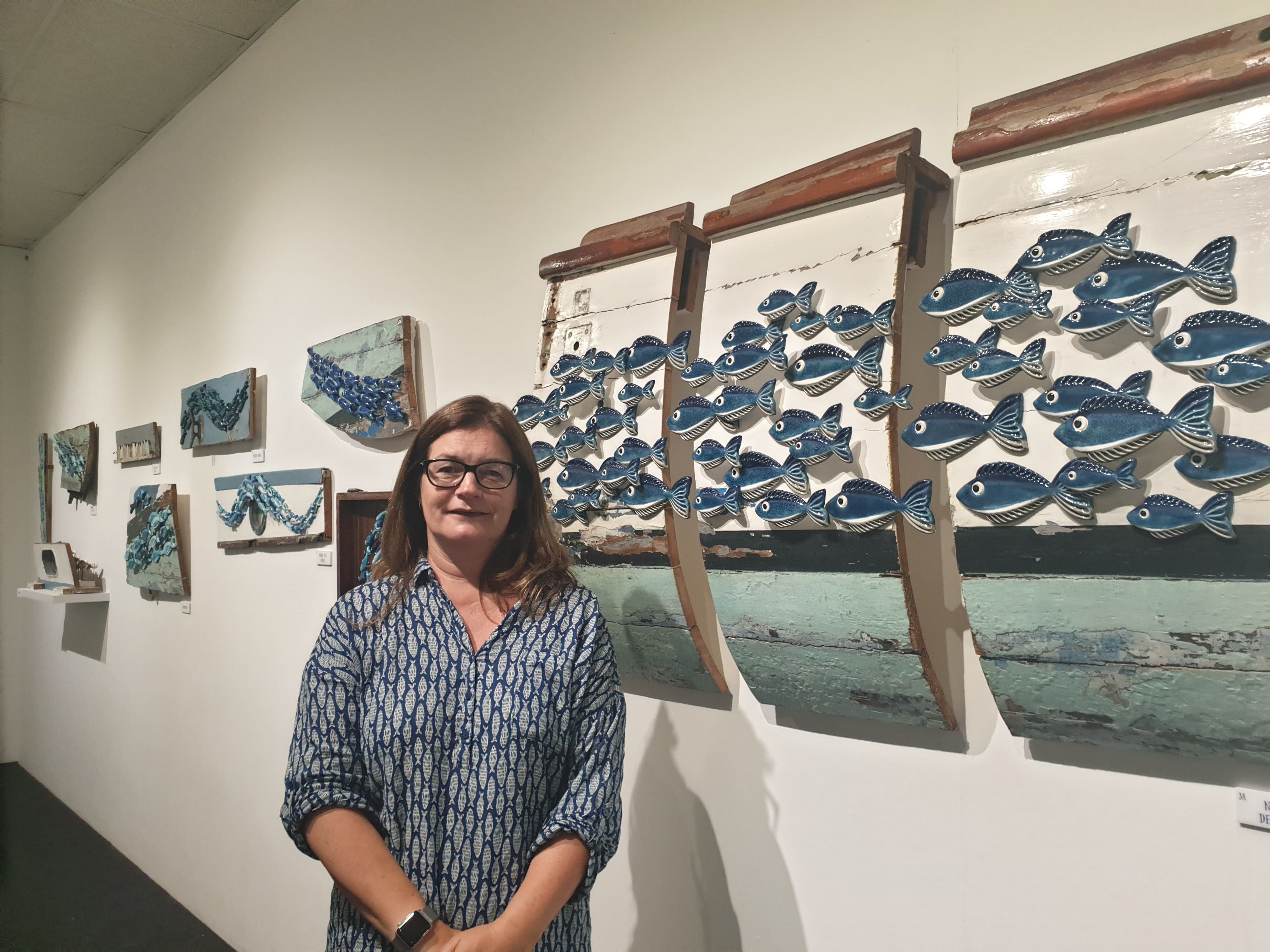 Pictured: Jane is celebrating her 10th anniversary in business.

Encouraged by the weathered look of the first boat she rescued from the incinerator, Jane jumped at the chance of salvaging a second one. She described working on the 22ft shell as “mind-blowing” after years of working on washed up wood, old pallets and scaffolding boards.

But as her husband was cutting up the boat in the harbour, Jane says many people came up to them to share stories about Ranzo, which they had owned at some point of his sailing history. “I started thinking it’s not just a boat, it has history just like a vintage car,” Jane said,

It also turned out that one of their friends was related to the original owners. “A friend of ours came into the studio and recognised the boat,” Jane explained. “He said his uncle used to own that boat and that it was in the family for 35 years. He brought us photos and the history of the boat.” 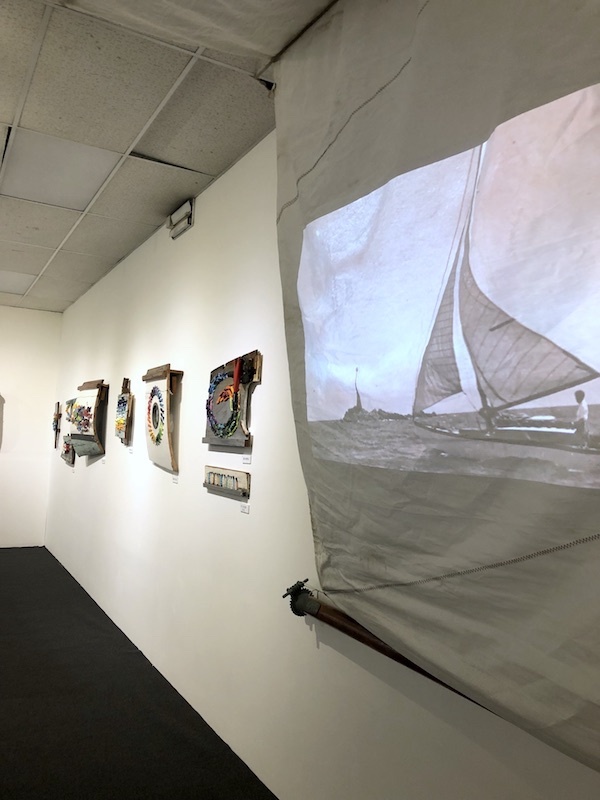 Pictured: 'Shipwrecked' features family footage of one of Ranzo's excursions to the Ecréhous.

The family also shared footage from an excursion at Les Ecréhous, which is being shown as part of the exhibition, projected on one of Ranzo’s sails.

All parts of Ranzo have been recycled in the exhibition, either as a canvas or as a stand-alone piece. After sailing for many years around the island, Jane is excited for it to start a new voyage. “Hopefully it will now travel again. It felt a bit sad to cut it up, but we have clients all over the world so who knows where it will go?

“We have recycled everything, we gave the engine to the sea scouts and we only threw away a small bin bag, it’s much better for the environment.” 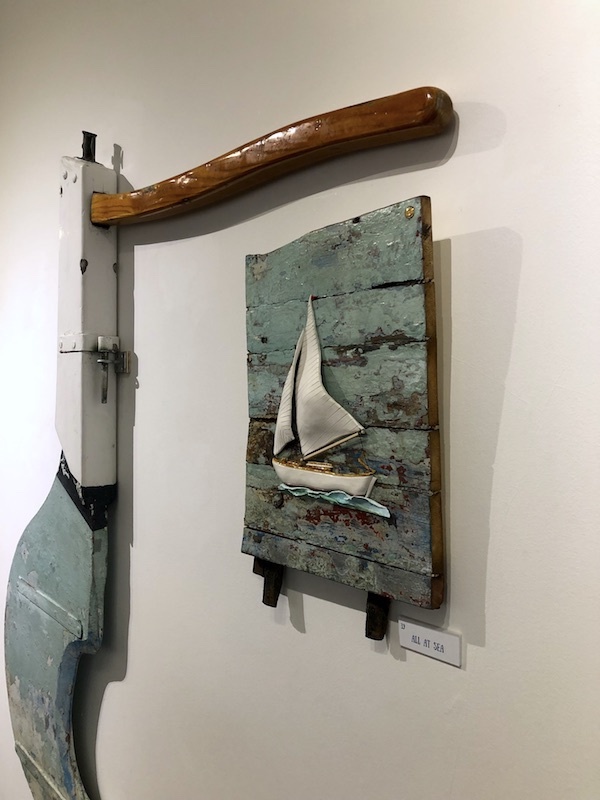 Pictured: Parts of the boat have been left intact for the exhibition.

“Shipwrecked,” Jane says, is as much about Ranzo as it is about Jane’s own work. “We used the boat and the pieces as best we can,” she said. “We tried and keep the shape and some of the parts intact.

The result is a colourful exhibition that immerses the visitor into the history of Ranzo. From rainbow colours to many different shades of pastel blues and greens, Jane James’ trademark school of fish fixed on the hull seem to come to life as the eye wanders from one piece to the other. 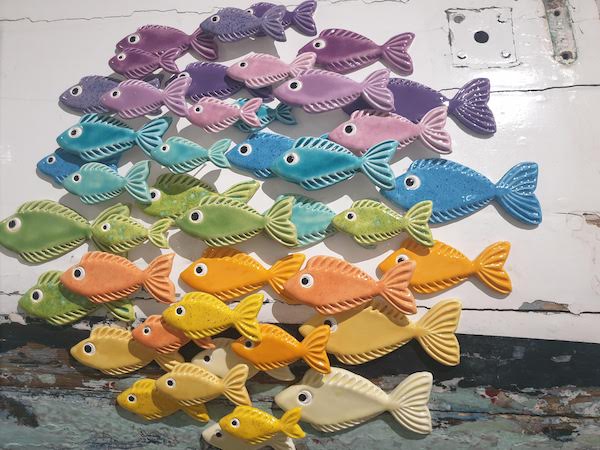 Pictured: The colourful shoals come to life against the hull of the old sailing yacht.

Some of the pieces are also a direct nod to Ranzo’s history, with beach huts alluding to Woodbridge’s very own and Seymour Tower, around which Ranzo would have sailed, featuring prominently in one corner.

A year in the making – Jane was still gluing some pieces on Thursday night - the exhibition is an ode to poem, but also to the painting and glazing talents of Jane’s team, all of whom have been involved.

“It’s been a really nice recycling project,” Jane said. “It was a really interesting change of direction. It was good to do something different and to have a completely free for all.” 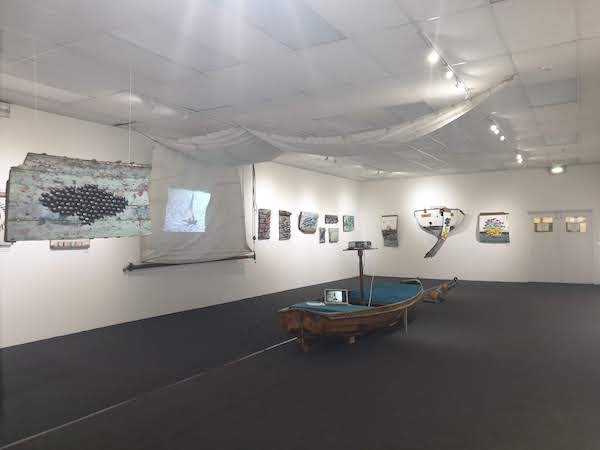 Pictured: Another boat, 'Royal Yacht,' features in the exhibition serving as a bench for visitors to sit on while admiring Jane James' colourful work.

The exhibition, which is Jane’s biggest yet, also serves as a celebration for her business’ 10th anniversary.

“I can’t believe that people are still enjoying our work,” she said. “I feel really privileged and I am excited for what’s to come.”

GALLERY: Find out how Ranzo has been recycled... 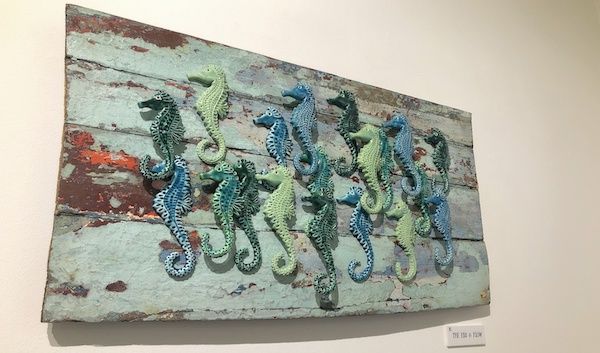 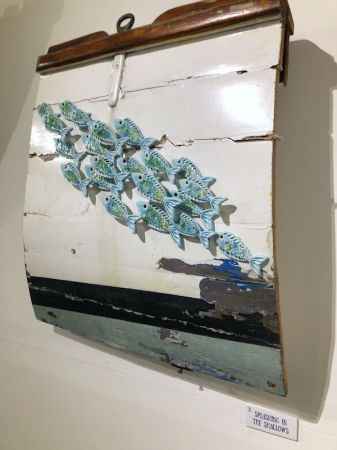 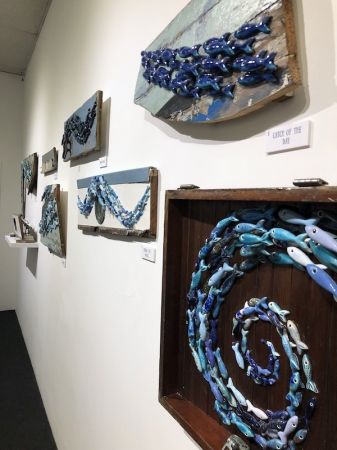 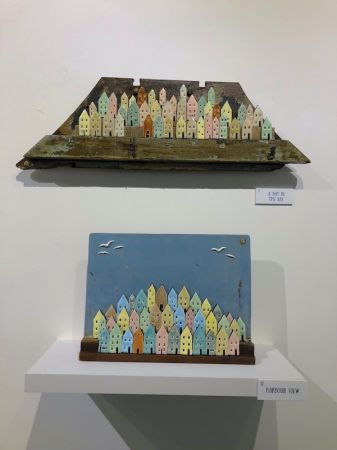 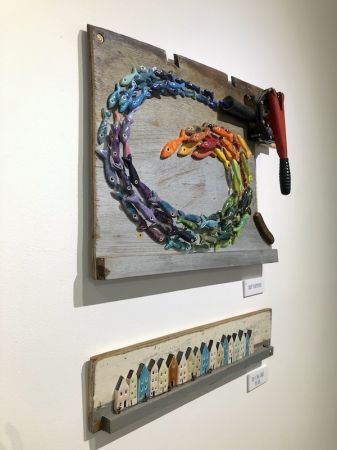 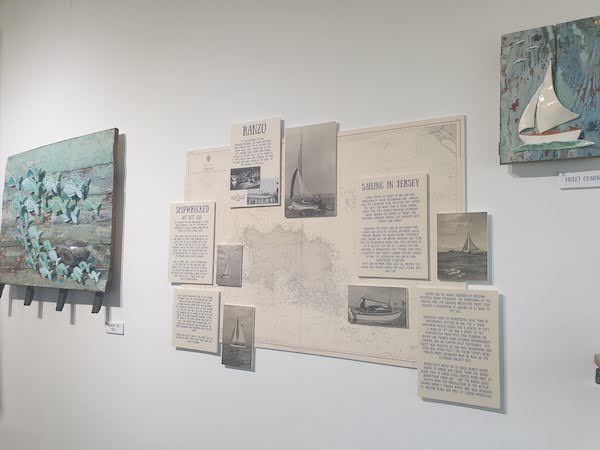 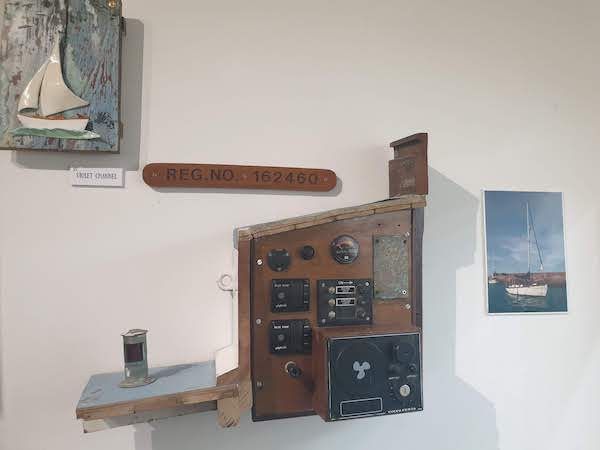 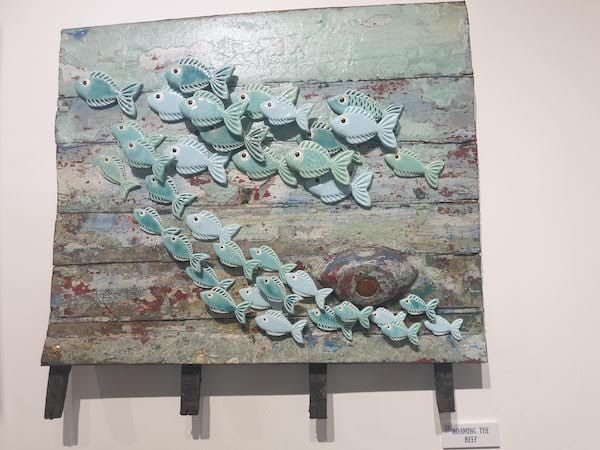 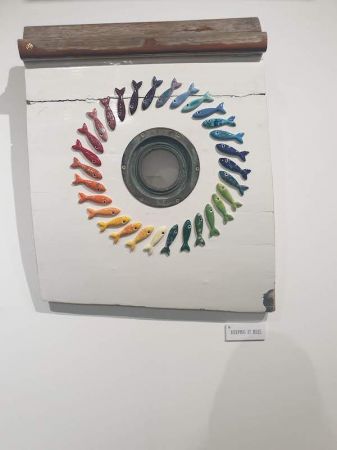 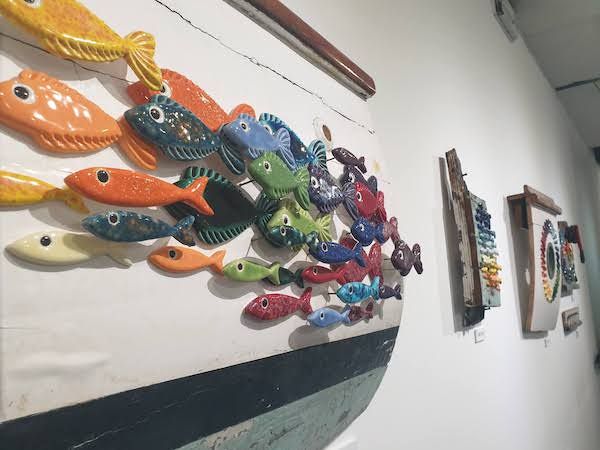 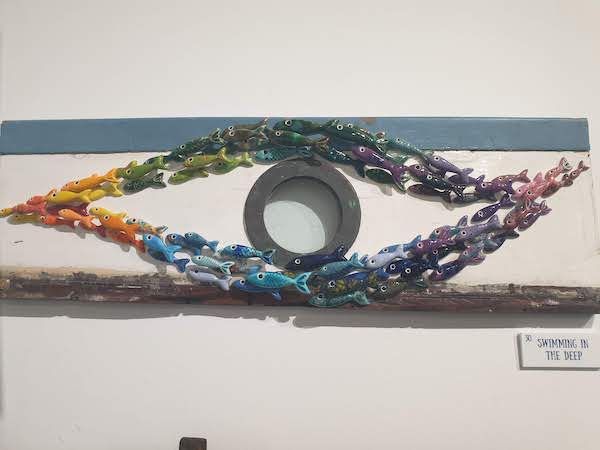 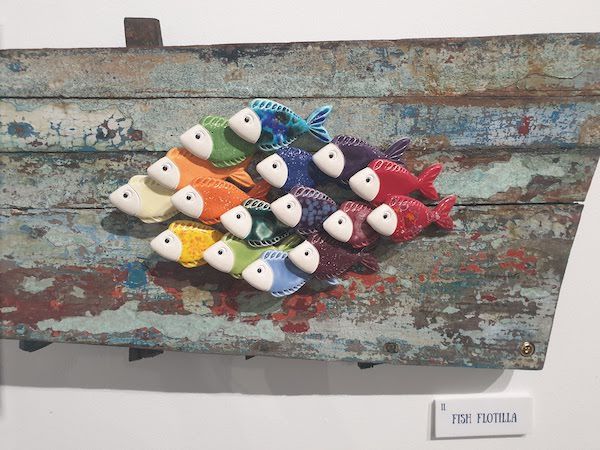 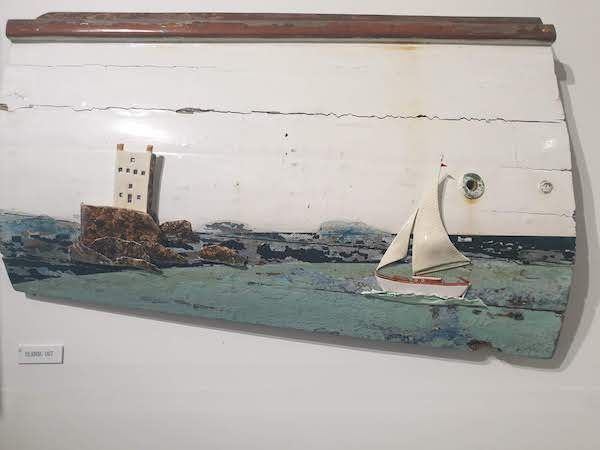 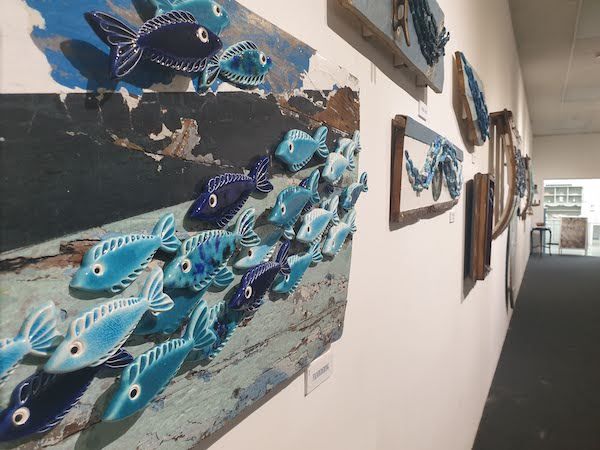 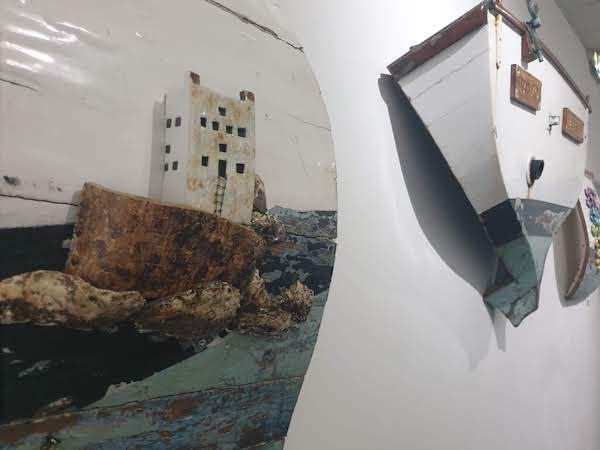 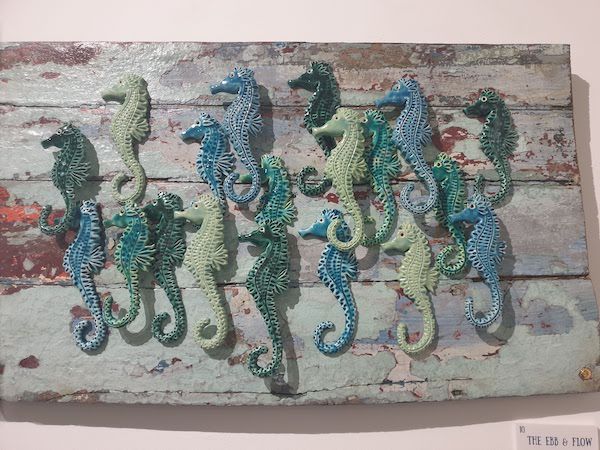 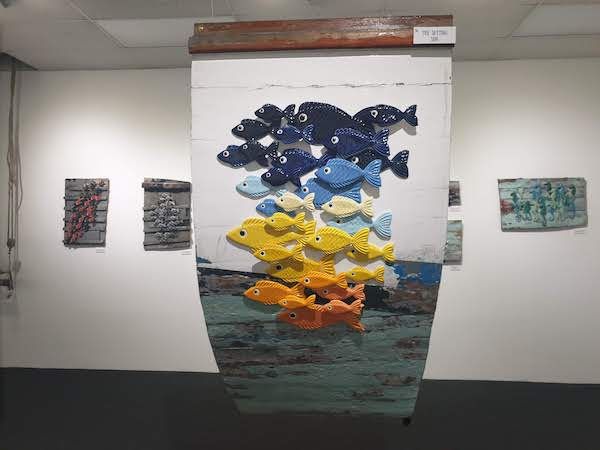 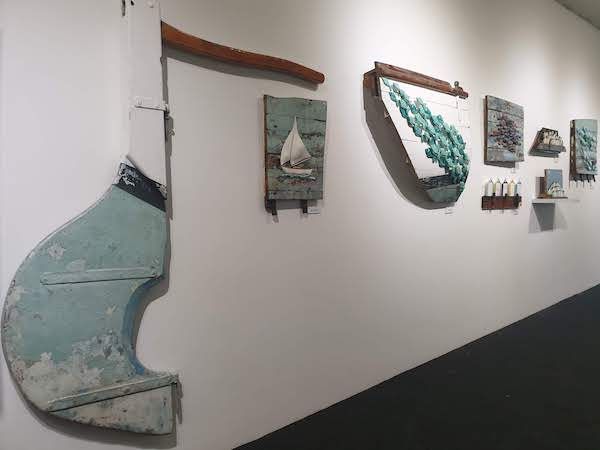 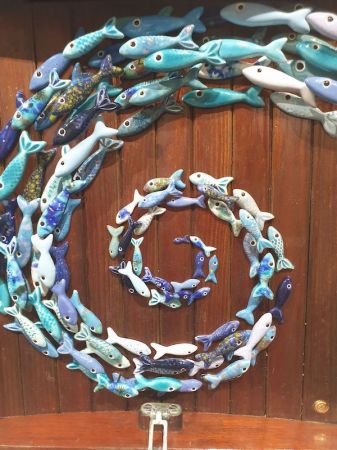 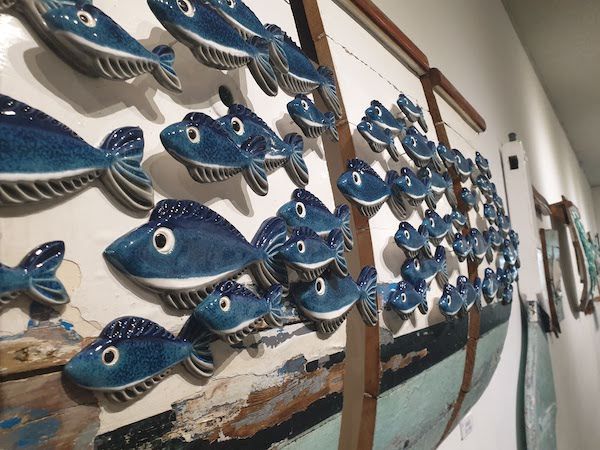 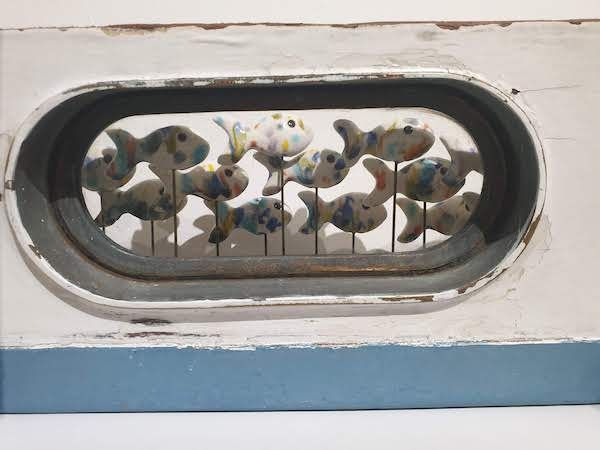 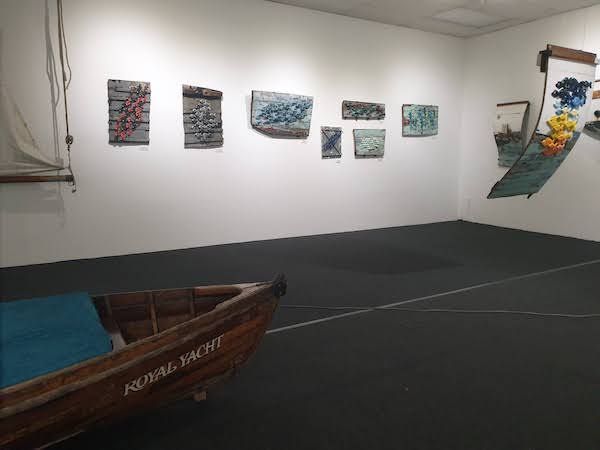