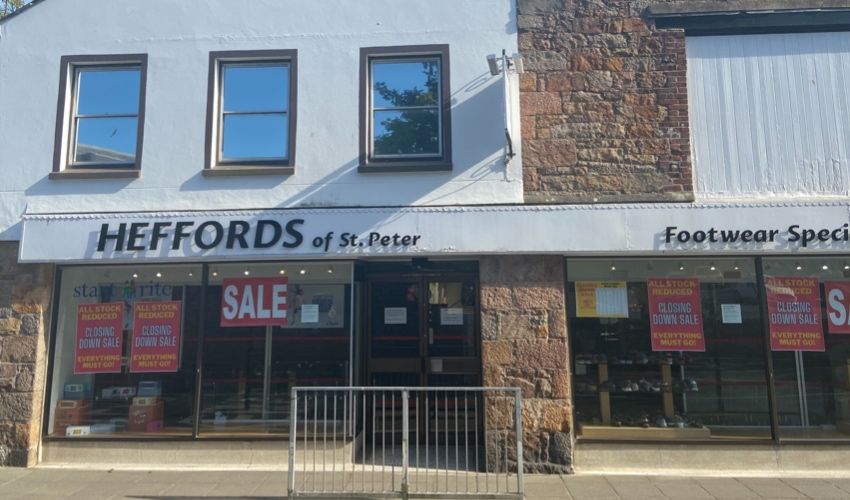 Just a year short of its 100th anniversary, Heffords shoe shop in St. Peter is closing its doors for the final time in September.

Generations of islanders have visited the shop close the parish hall, whether to buy school shoes before the start of term or perhaps to purchase a smart pair of evening heels.

Often, a member of the Hefford family or a trusted member of staff were there to ensure a correct fit.

A sale was often confirmed after a short walk around the shop.

But covid and changes in shopping habits mean that the business is no longer viable.

Since 2007, Heffords has been owned by UK-based Tutte and Thomas, who were approached to take over the business by the Hefford family.

Director John Waldron said: “We were a shoe wholesaler on the mainland and used to supply independent shops in the south of England, as well as Heffords in Jersey.

“In the 90s, Chinese companies took over the wholesale market, so we moved into owning a small number of shops. At that time, Mrs Hefford wanted to retire so asked us if we wanted to buy the business.

“The shop performed brilliantly but then covid arrived and that changed things irrevocably. The shop rightly closed initially but sales are still only 80% of what they were before the pandemic.

“The staff have witnessed the decrease in footfall first-hand and they have been incredibly understanding and pragmatic.”

Mr Waldron added: “I would like to pay tribute to them and their total understanding; they are determined to make the most of the last couple of months of trading. The job market in Jersey, like the UK, means that I hope they will quickly find a job.

“For us, however, it has been difficult to recruit staff into retail.”

Mr Waldron said that the internet had also taken its toll.

“When companies like Clarks are prepared to send out fitting guides in the post so people can size themselves before buying online, it makes it very difficult for retailers,” he said.

“Since deciding to close, we have had a fantastic response from customers, who are obviously sad but also have cherished memories of Heffords. It has its place in Jersey retail history and September will certainly be the end of an era.”

Posted by Scott Mills on Jul 17th, 2022
Unfortunately the west footwear fashion trend never left Freeman, Hardy & Willis standard.
Posted by kelvin de la haye on Jul 17th, 2022
heffords became a part of the uk in 2007, by being bought by tutte and thomas . so many years before covid , my assumption is , this is a good reason to pull out of jersey , even 80% turnover at the moment. is an up ward trend being as we are an island , and people over here want personal service . bad vibes .
Posted by Jon Jon on Jul 17th, 2022
Internet will kill off shops ,yes shoes,school uniforms buy cheaper online !
To place a comment please login Login »