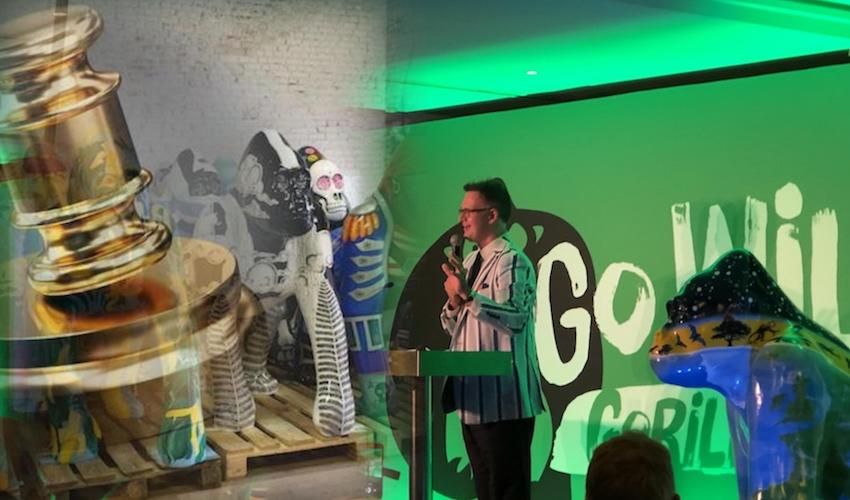 Going, going, go-rilla…a ‘wild’ auction of 44 life-size gorilla sculptures has raked in more than one million pounds for Durrell.

The event, which was held at the Royal Yacht last night, marked the conclusion of the ‘Go Wild Gorilas’ public art trail, which saw a sculptures decorated by local and international artists take up residence in iconic locations around the island throughout the summer.

The initiative – which was proudly supported by Express as the official media partner – aimed to celebrate the wildlife conservation charity’s 60th anniversary while also fundraising for a new gorilla enclosure.

Pictured: Auctioneer Charles Hanson on stage with one of the 'Go Wild' artists Gabriella Street.

CEO of Jersey Zoo, Dr. Lesley Dickie, opened the evening with a quote from conservationist and TV personality Sir David Attenborough: "There is more meaning and mutual understanding in exchanging a glance with a gorilla than with any other animal I know." Dr. Dickie said that this was exactly how she felt when she worked with gorillas when she first started zoo-keeping and it was with this thought that she opened the auction.

We are THRILLED to announce that we raised a grand total of £1,146,500 at the Grand Gorilla Auction, which is beyond anything we could have hoped!!

Thank you so much to everyone who has been involved with this project, you've all been amazing! pic.twitter.com/Yutso7Pl3Z

While the trail generated both conversation and vital funds for the charity, the main event was last night’s grand auction.

Bids chimed in from across the world in person, online and over the phone – all of which were fielded by Bargain Hunt’s lively Charles Hanson. At the outset of the auction, he cheekily riled up the crowd, urging them: "go home with a memory, and don't wake up with a nightmare of not having a gorilla!"

Bidders in the room and from all over the world including the USA, the UK and even Tokyo jostled to get their hands on the coveted gorilla statues. The star of the evening was 'The Space Between Us,' an avant-garde sculpture which plays with negative space by the Jersey Sandman Andy Coutanche. This piece was the first and only gorilla to break £70,000.

The evening also saw guest appearances from some of the artists who designed the sculptures as well as actor and Jersey Zoo ambassador Milo Parker who played Gerald Durrell in the ITV production of 'The Durells'. Teammates from the Jersey Reds also took to the stage ahead of their sponsored lot 'Dream Signing.'

But which ‘Kong’ generated the wildest amount? Here’s the top three…

Lot 22 "The Space Between Us”
Artist: Andy Coutanche
Andy's INCREDIBLE gorilla sold for a RECORD-BREAKING amount after a truly gripping bidding war! pic.twitter.com/TV4sc38MAb