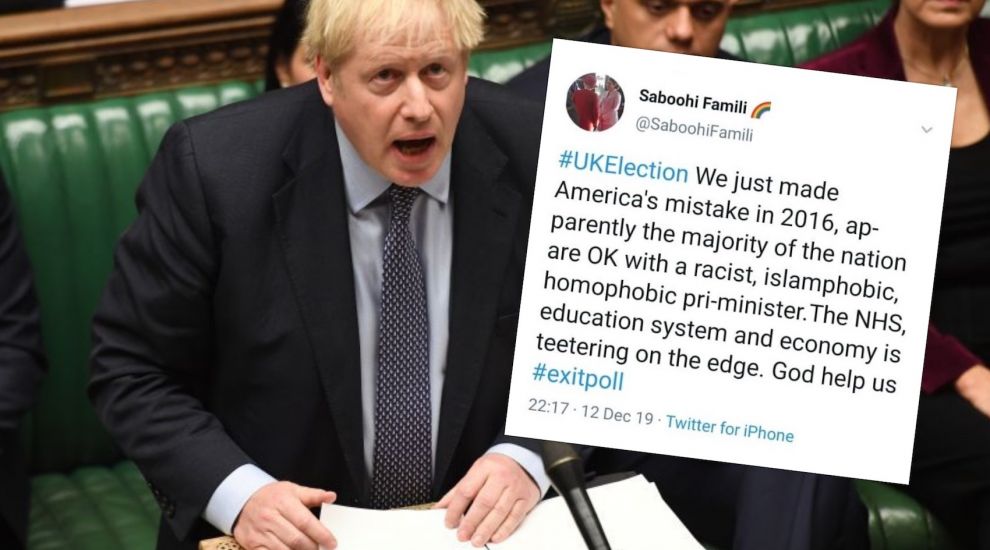 Government officials are refusing to admit whether they ordered an Education Director to delete a tweet blasting the Prime Minister as “racist, islamophobic and homophobic” on the night of the UK General Election.

The tweet was posted by Saboohi Famili – whose full title is Director of Young People, Further Education, Skills and Learning – 17 minutes after the exit polls were released, confirming a probable victory for Boris Johnson, and a strong Conservative majority.

It read: “#UKElection We just made America’s mistake in 2016, apparently the majority of the nation are OK with a racist, islamphobic, homophobic pri-minister.

“The NHS, education system and economy is teetering on the edge. God help us #exitpoll [sic]”

The sentiments garnered several retweets and more than a dozen likes, including from Deputy Rob Ward.

However, the tweet was later deleted, sparking questions over whether the senior government employee had been prevented from expressing her personal views – particularly at a time when the External Relations Department is looking to strengthen its ties with Boris Johnson’s government as the threat of Brexit looms.

Contacted by Express, government officials declined to state whether the Director had been forced to remove her tweet.

They also refused to disclose whether the posting fell foul of government social media rules.

“Employees and other workers should ensure that their online behaviour is lawful while still being bound by the values of the States of Jersey, its Code of Conduct and policies,” a spokesperson said, before adding: “The Government of Jersey does not comment on the actions of individual employees.”

Pictured: The External Relations Department has been attempting to build a relationship with Westminster.

They noted, however, that the government’s new social media policy – which is not complete and is currently “going through sign-off” – states that “some employees are deemed to be politically ineligible by virtue of their post and grade."

Asked for a clearer definition, the spokesperson confirmed that civil servants at grade 12 or above – those with salaries around £60,000 and above – fell into this category, forbidding them from publicly supporting anyone standing for election or “playing a part in any political matter”.

Pictured: The government's social media policy for employees is currently under review.

Ministers were also briefed not to post comments online about the General Election results.

Express understands that they were urged to refrain from making partisan remarks on the basis that the island would not wish for other countries’ politicians to do so with regards to Jersey’s elections.

It is unclear whether senior civil servants received this same briefing.

Posted by john garner on Dec 20th, 2019
I always think with the States it is a bit like an Agatha Christie murder mystery ..look for the sex or the money or in the States case the power ..Johnson will drop Jersey like the proverbial hot potato if it suits his purpose at that instant .Politicians bigging up any fantastic relationship with the UK need to get real and be more honest with themselves and the public
Posted by Sarah Ferguson on Dec 23rd, 2019
The lack of a code was one of the comments made by the departing Auditor General in her final statement.
To place a comment please login Login »

Election confirmed after “not fit for office” Constable resigns