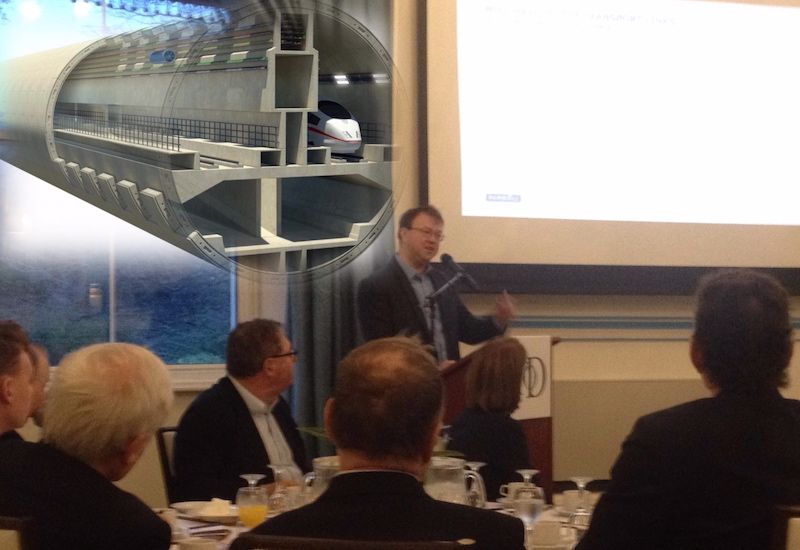 The entrepreneur behind proposals for an inter-island underwater tunnel has told business leaders his idea could double Guernsey’s GDP and turn tax rises into tax reductions as the island looks to stave off an impending economic crisis.

Investment Actuary Martyn Dorey and engineering firm Ramboll's Head of Tunnels Stephen Whitham presented the case for their £2.6 billion project at a business meeting hosted by the Guernsey Institute of Directors.

The pair called on business leaders to "spread the word" about their proposals and lobby government to support the idea, which they say is needed before they can attract private infrastructure investors to bankroll the 44km rail tunnel between St. Peter Port and St. Helier.

Politicians in Guernsey have so far shown little enthusiasm for the project, with one saying that if he had that kind of money, he certainly wouldn't be spending it on a tunnel to Jersey.

Future phases of Mr Dorey's project could see the creation of a fixed link to France via Jersey.

11,000 passenger movements a day between Guernsey and Jersey is achievable says @TigGuern with a revenue break-even from day one. pic.twitter.com/KcOFJnRKpI

"If you have got an island in the middle of nowhere not connected to anything, it’s not worth anything. If you have a really connected node in terms of people, ideas and culture it is very valuable

"Staying as we are entails risk, people think if you stick your head in a granite hole and pretend that nothing is happening we’ll be alright.

"Gavin St Pier is initiating a tax review right now, you will all be very concerned about it. How can Guernsey possibly be competitive if we have to raise taxes? The answer is we can’t. There is a cost to doing nothing, there’s a massive risk to the economy of carrying on in our current path."

He said the island's ageing demographic is a serious threat to the island's economy, with tax spend to increase in order to maintain the current level of public services, and tax take projected to go down as the active workforce declines. 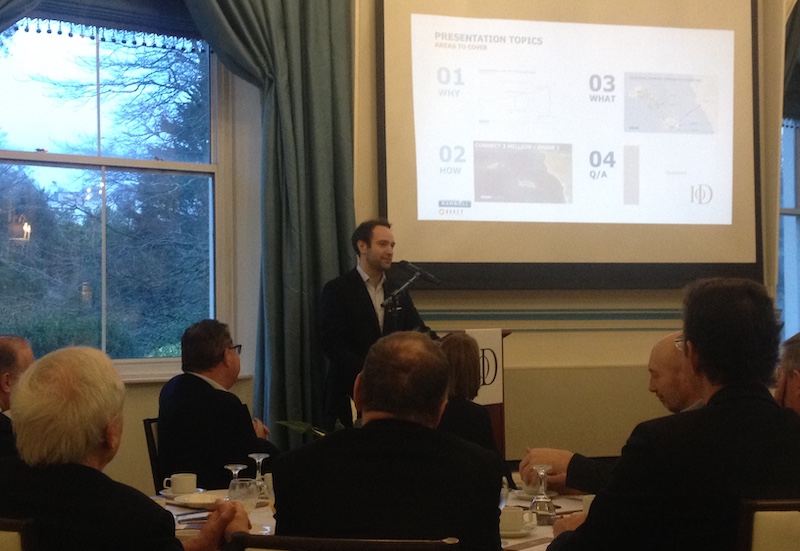 Pictured: Stephen Whitham from engineering experts Ramboll spoke about the different ways that a fixed link tunnel could be constructed.

Doing calculations from publicly available statistics, Mr Dorey said the island will need 4,700 extra workers in the island by 2028  and 12,000 by 2039 to balance the economy.

To help remedy that, he says Guernsey could develop a commuting workforce, which is fairly common in Europe and particularly with a country like France, which has significant working populations in Switzerland, Gibraltar and Monaco.

An underwater tunnel would also boost the economy in other ways, according to Mr Dorey.

"It currently takes two hours to get from St Peter Port to St Helier, sometimes longer. The impact of changing it a quarter of an hour will be a lot - wherever you connect two groups of people fast and cheaply, you get a boost in economic growth."

"This is a solution that will bring tax rates down"

"Guernsey currently has 500,000 visitors a year and Jersey has 750,000. If you didn’t have to plan the journey because it was so quick and so convenient, we would see both islands sharing the tourism population so we might actually, with the presence of a tunnel, double our tourism."

Mr Whitham spoke about the facts and considerations when it comes to constructing long distance fixed links between islands and countries. His firm has worked in several notable projects across Europe, such as a 18km fixed immersed tunnel link across the Fehmarnbelt.

He said the key focus was to create a sustainable, safe and high speed travel link that uses well-established best practice.

"We want to re-use what is good and sustainable, not re-invent the wheel," he said. "There’s zero compromise when it comes to safety. The risks should be no worse than an on-land train."

There are issues that would need to be worked through with respective governments - most notably border control - before a high speed international link to France could be achieved.

All over Europe, people travel between countries to work in financial services on a daily basis to work, contributing billions of euros to their economies. pic.twitter.com/I48tfZNLr8

Mr Whitham said those challenges are not insurmountable, and would largely come down to politicians.

"If you could set up a national link, that would be a very strong message," he said. "If you want to demonstrate that you can get it done, then do it between the Channel Islands first."

Mr Dorey said the project is reliant upon politicians for other reasons too.

"We are not going to get an infrastructure fund to pay for a feasibility study or to invest without a government guarantee," he said. "We will need government support if an infrastructure investor is going to come on board, and they will only do so when that stack of paper is there saying how it works."

"We are looking at a 10% tax rise [his prediction of the outcome of P&R's tax review], and the worst case scenario if we put our fixed link and no one uses it would be a 1.5% tax increase. But I believe you will reach a point where you are reducing tax. This is a solution that will bring tax rates down, and I don’t know of any other plan in the Channel Islands that reduces tax rates."