Have you seen missing Bigfoot moggie? 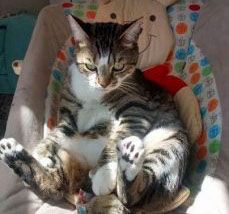 Have you seen missing Bigfoot moggie?

The hunt for Bigfoot has reached Jersey - but instead of a hairy apeman in the woods, the search here is for a cat with unusually large paws.

Police have put out a 'moggie-shot' of Hugo Huge Paws who has seven claws on each front paw and who went walkabout from his home on the outskirts of town on Monday night.

Cats often wonder off but not four-year-old Hugo Huge Paws - he's an indoor cat and his owners fear he may have fallen from a window at his home in Duoro Terrace on Mont Pinel - the road that leads down to the Merton Hotel.

Owner Mark Evans said: "We live in a third floor apartment and I'd accidentally left a window open. We thought he might have gone on a ledge to another apartment but we think he might have slipped and fallen. He won't know where he is because he's never been out of the flat before."

Mark says he's a friendly, microchipped cat who stands out because of his big paws but he's desperate to get him home.

Officers have put out an appeal on twitter to help find him and Mark wants anyone who's seen him to give him a call on 077977 47262.