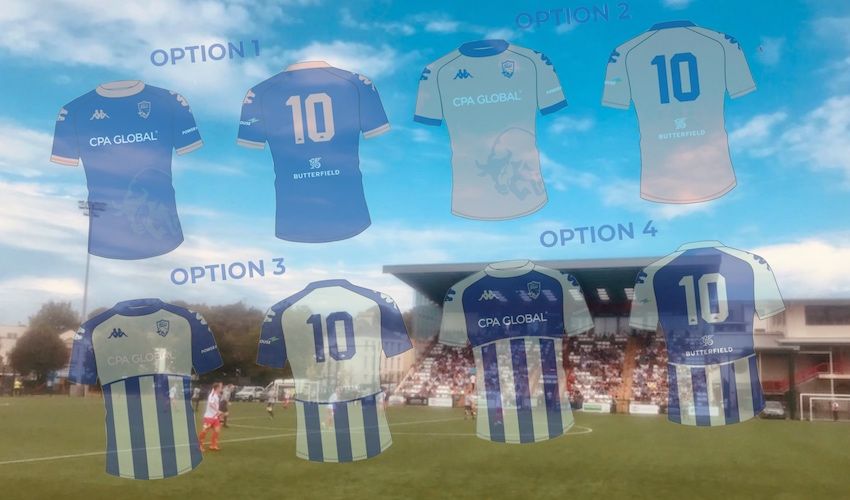 Islanders are being put in charge of picking the record-breaking Jersey Bulls' third strip for the 2020/2021 season.

Due to the Covid-19 pandemic, the Bulls’ 2019/2020 season has ground to a halt, like many other sporting leagues on the island and across the UK.

However, the Jersey-based football club says it has its eyes firmly set on the next season.

The rookie club have already pledged to fight the Football Association’s decision to deny them promotion after an unbeaten season that even surpassed Liverpool’s momentous few months.

While it's unclear how that battle will end, the Bulls have a new challenge in the meantime: deciding on a strip for the season ahead - and they're asking islanders to get involved in the process.

They're inviting supporters to vote for their favourite shirt, choosing from four designs created by technical partners, Kappa, each featuring Butterfield’s brand colours.

It comes after the Bulls teamed up with gold sponsor, Butterfield, to help showcase the Bank’s new branding.

“It’s been a difficult time for everyone on the island and our thoughts go out to those affected by Coronavirus,” Ian Horswell, Director of the Jersey Bulls, explained.

“In the absence of matches, we wanted to involve our fans as much as possible as we all look ahead to the new season; it’s our way of showing them how greatly we value their continued support.”

The Director said Butterfield had been immensely supportive of the Bulls, prompting the club to display their new branding on their gear. “This was a really fun and creative way to get involved and we are really pleased with the shortlisted designs,” Mr Horswell said.

“As proud sponsors and supporters of the Bulls, we are very excited for the team to play in our company’s brand colours and we are extremely grateful to the Club for supporting us in this way,” Noel McLaughlin, Managing Director at Butterfield said.

“ The Bulls had a fantastic season this year, topping the table the whole way; it’s such a shame for the league to have ended when it did, but we are now excitedly looking forward to seeing the Team kick off next season with Butterfield behind them all the way.”

In addition to helping the team pick the winning design, everyone who casts their vote will automatically be entered into a competition to win a shirt along with a pair of tickets to the first home match of next season.