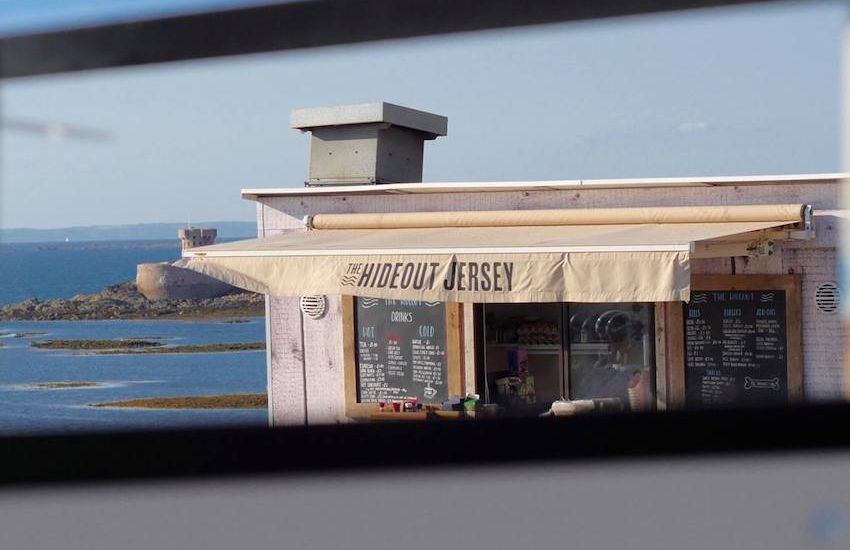 The owner of a kiosk at La Pulente has failed in his attempt to move his business back to its original location, next to toilets that are due to be turned into a new beachside café.

During a day-long hearing last week, Karl Sutton - owner of The HideOut - argued that he should be allowed to move from the slipway, where he has been based since November, back to the top car park, where he had been since opening the business in 2016.

This was because work to convert the toilets into a Nude Food café had not started and looked unlikely to begin soon, he argued.

Specifically, Mr Sutton was asking the Royal Court for an interim judgement on his February application for a judicial review of St. Brelade Constable Mike Jackson's decision not to allow The HideOut to return to its original spot.

But after hearing from the owner of toilets, Frank Laine MBE, who told the Court that work to convert them had started and should be completed by September, Commissioner Sir Michael Birt refused the application. 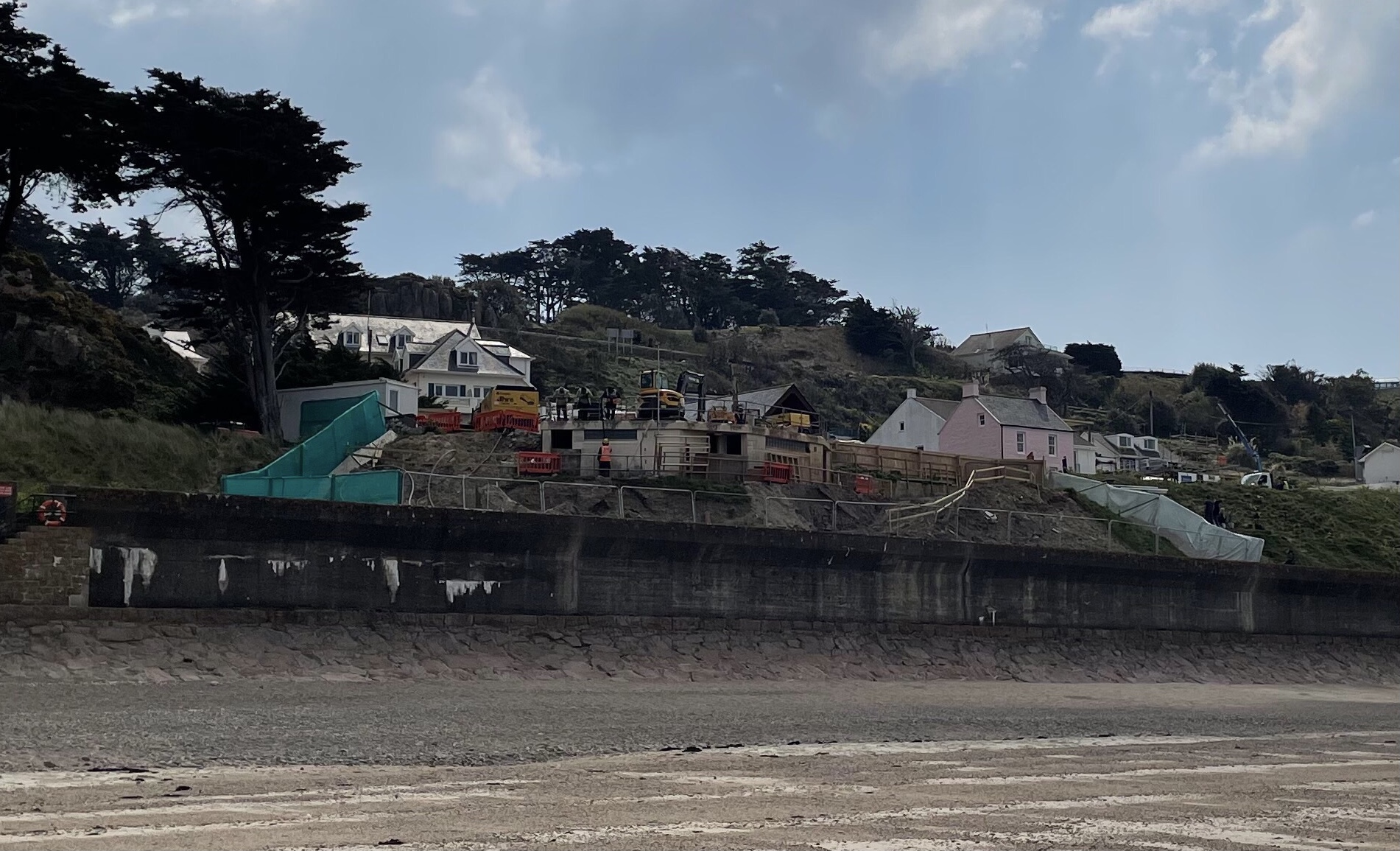 Pictured: Workman at the La Pulente toilets at the end of last week.

Mr Sutton’s lawyer, Advocate Howard Sharp, argued that the decision not to renew The HideOut permit had been decided last summer following exchanges between the Constable and Mr Laine, before Mr Sutton knew he had to vacate the car park.

He said that activity on the site in the second half of last year - an ecological assessment and species relocation, the removal of railing and the lifting of a concrete path - had purely been to keep the planning application alive. It had run out in January and Planning needed to see some evidence of work, he said.

“They chose to do the minimum amount of work to satisfy Planning that work had technically started,” he said.

Advocate Sharp said that parishioners at an assembly at the end of October, who agreed to give Mr Sutton a licence to open on the slipway after being told that the development would be finished by April, had been misled.

This date had been given to the assembly by a representative of the developer but this timeline was never a realistic prospect as the bylaw application was only submitted that month, said Advocate Sharp.

“We have a prima facie case that, had the assembly known this, they would have said no to the permit,” he said. “They would have worked out there was no need to remove the HideOut from its location.

“They would have said, 'Come back with a proper plan and proper timetable tied into a proper lease, and then we will consider the matter further.'”

In December, the Constable agreed to extend Mr Sutton’s slipway permit until 1 June as it was due to run out at the end of the year. By this stage, Advocate Sharp argued, Constable Jackson would have known that the café was not going to be completed.

The slipway permit has now been extended until the end of August.

Cross-examined by Advocate Sharp, Mr Laine said he was investing £1m in the café and that, in his 40 years in the industry, no project had ever followed the first draft of a timeline. He said that the end-of-April estimate, given at the Parish Assembly on his behalf in October, had been accurate at the time.

“I bought the company in August and all the consultants and advisers were retained by me. In early September, I then instructed everyone to get on to work,’ he said.

“It was our intention to get on with it for the next summer season. At that time, six months seemed a reasonable time. The April estimate was not meant to deceive; all we wanted to do is get on with it.”

“It will be finished in September, if everything goes to plan.”

Mr Laine said that work would soon start to drive 57 concrete piles around the toilets, which would support the decking. This required a specialist rig, of which there was only one in the Channel Islands, in Guernsey. This was coming over shortly.

Pictured: Frank Laine MBE is investing £1m in the redevelopment of the La Pulente toilets.

Work had already started, he said, to test two pilot holes that had been drilled.

Explaining the delays, Mr Laine said that an initial civil engineering solution from one company had been, in his opinion, over complicated, so he had sought other solutions. It had also become clear that the piles needed to be drilled down far deeper than initially thought, to 27m instead of 10m.

Another engineering challenge was the removal of switches for the nearby foul sewage pumping station, which were housed between the two sets of toilets. This required the JEC to lay a new power cable to the station, which had delayed the project by three months.

Mr Laine’s lawyer, Advocate Paul Nicholls, told Court: “The essential point is that Mr Laine trusts people to get on with things. He is 40% owner in the business that will be operating on the site. It is in his interests to get on with it.

“The simple truth is that the applicant doesn’t want the restaurant on the site. He had cosy arrangement before and now he faces a successful café operator opening nearby.

“Where is the injustice of moving a few metres down the slipway? It cannot sensibly be suggested that customers cannot find him or park there. More pertinently, there is no suggestion that he is taking less money than last summer.

“It is incumbent on the applicant to put his cards on the table. Are his takings down? Have the number of customers fallen? He has a duty of candour to explain how his trading has been affected.

“The Court has no evidence before it on how his business has been adversely affected financially. There is a clear reason for this: it hasn’t, and these are all baseless complaints.

“This is a case where my client has legal planning permission to develop this site. The condition to start work has been fulfilled and there is nothing to say it must be built within 8-10 months.”

Advocate Chris Austin, for the Constable, said that Mr Jackson had acted reasonably and fairly. His motive, said Advocate Austin, was to get the public toilets reopened as quickly as possible.

Although the Commissioner refused the interim relief, Mr Sutton’s application for judicial review remains, and is due to be heard by the Royal Court in July.

Parishioners to vote on fate of coastal kiosk

Hideout kiosk seeks to remain on slipway for another year