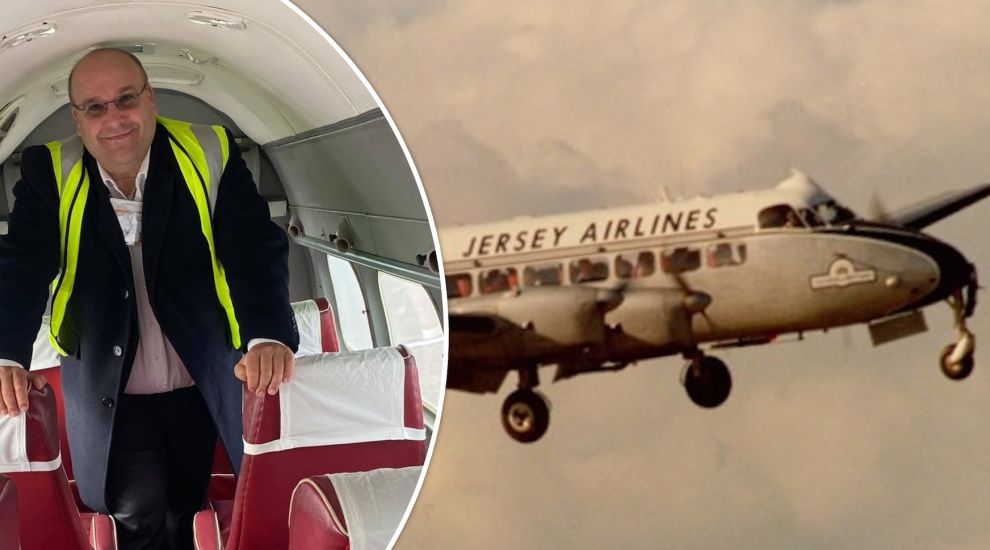 One of Jersey’s most iconic planes has been rescued from the brink of destruction or being left to rot after an aviation enthusiast made a bid of £1.

The former Jersey Airlines De Havilland Heron's fate was left hanging in the balance earlier this year when the company that owned it collapsed.

As liquidator of the company, Grant Thornton began a process to flog the aircraft affectionately known as 'The Duchess of Brittany' but struggled to find a taker.

Concerned that nobody else was going to step in and save it, JFSC Commissioner-by-day and Jersey Aero Club Treasurer Matt Palmer stepped in to save it with a nominal bid of £1 - a bid he has now found out has been successful. 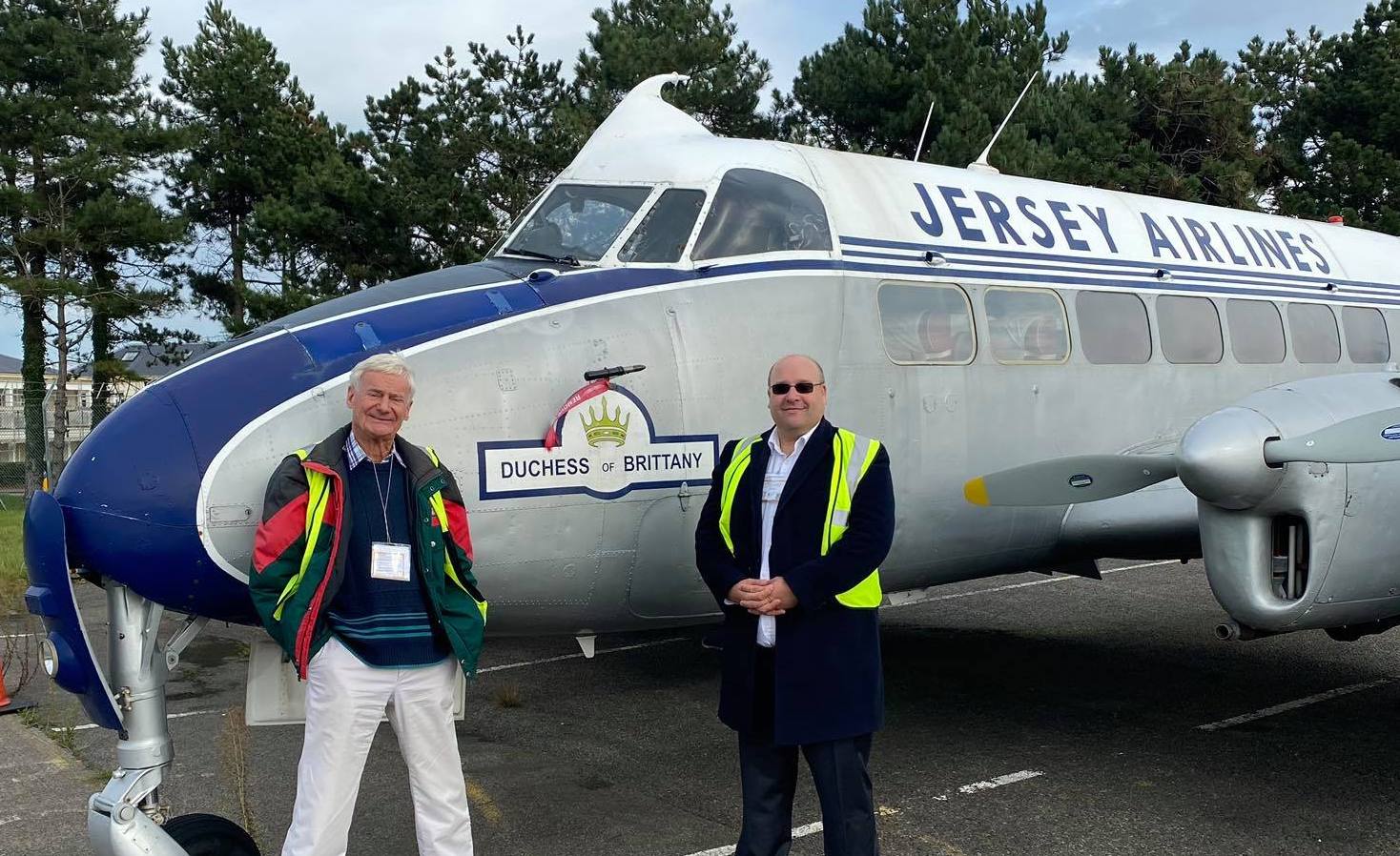 Depending on the condition of the plane, the plans will either be for it to be put back in the sky as a historic aircraft for events like airshows or “the more likely” option of it becoming a static exhibit "to showcase the history of aviation in Jersey both to passengers coming in through the airport, and to locals and tourists."

The Heron’s history dates back to the 1950s, beginning its life as a commuter plane for Jersey Airlines as one of the main ways islanders were connected to the rest of the world, before then being bought by the Ministry of Defence, and serving from 1961 to 1989 in the Navy as a Sea Heron KR441.

After its service, the heavy four-engined craft was put up for auction in 1990 at Sotheby's, and was snapped up by a company of local plane enthusiasts, who successfully bid for the vehicle, and made it their mission to get it back up in Jersey’s skies, as well as restoring its ‘Jersey Airlines’ exterior.

However, after a number of successful trips flying back in the skies in the 90s and early 2000s, the plane ran into technical difficulties, ending up being looked after by a local aviator in Coventry to undergo maintenance and repair work. 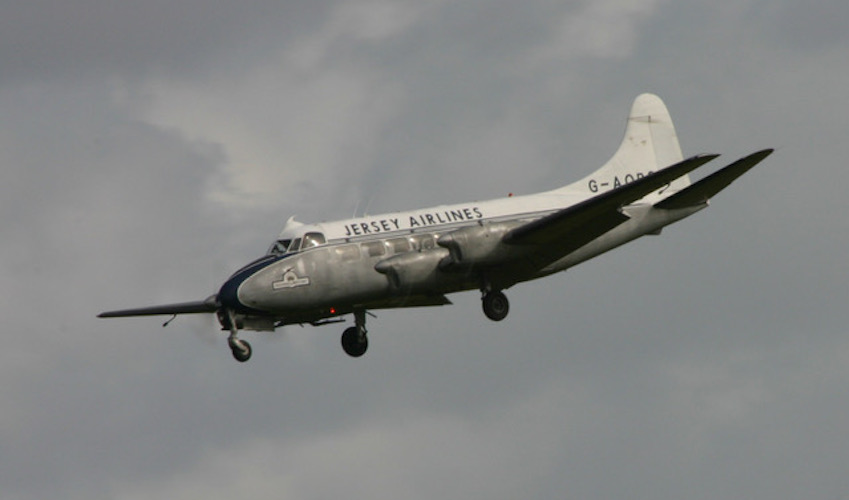 Pictured: The plane, whose first owner was Jersey Airlines, was bought up by the UK Ministry of Defence before eventually finding its way back to the island after a bit of turbulence. (Peter Weber)

It was thought this work would take six weeks - however, as one of the plane’s main champions, former Captain Peter ‘Willy’ Weber pointed out to Express back in 2018, it took longer than anticipated.

“The restoration of this piece of Channel Islands’ heritage has taken 11 years and cost a proverbial arm and a leg,” he said at the time.

Despite the delay, that year it set its sights homeward-bound, as all the restoration efforts finally paid off and it was returned to its Aero Club home.

In what has been an increasingly bumpy landing for the historic engine, however, the company that owned it collapsed two years later, leaving it in the hands of Grant Thornton to be sold off into spare parts or left to gather dust if nobody stepped up to claim it. 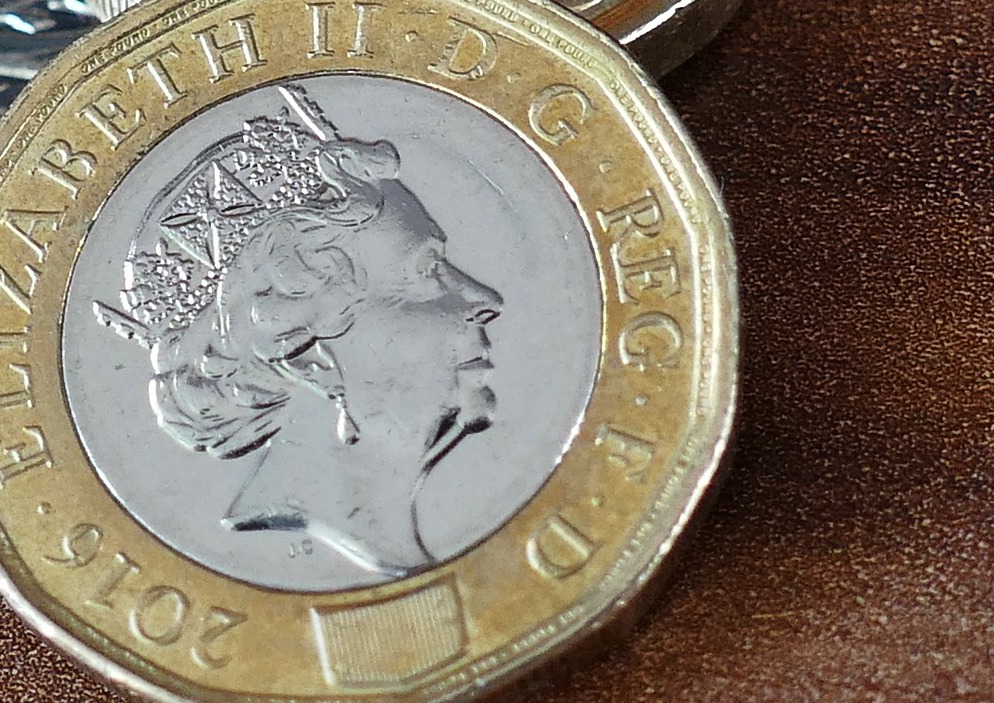 Pictured: Mr Palmer put in a nominal bid of £1 on the aircraft with Grant Thornton when it looked like nobody was going to step in and save it.

While it is now in the hands of the community it has been so closely associated with through the years thanks to Mr Palmer's bid, there is plenty of work to be done.

If it's possible for the plane to fly again, spare parts will need to be recovered from different parts of the UK. If it's to remain grounded, those spare elements of the aircraft will be sold off to help fund the static exhibit.

Maintenance work to get it in a suitable state for either of those purposes will be a costly undertaking, so Mr Palmer is making a plea to Jersey’s community to help raise the £50,000 needed to bring it back to life and set up a crowdfunding page.

He is also calling for historical and aviation experts to get involved in the mission. 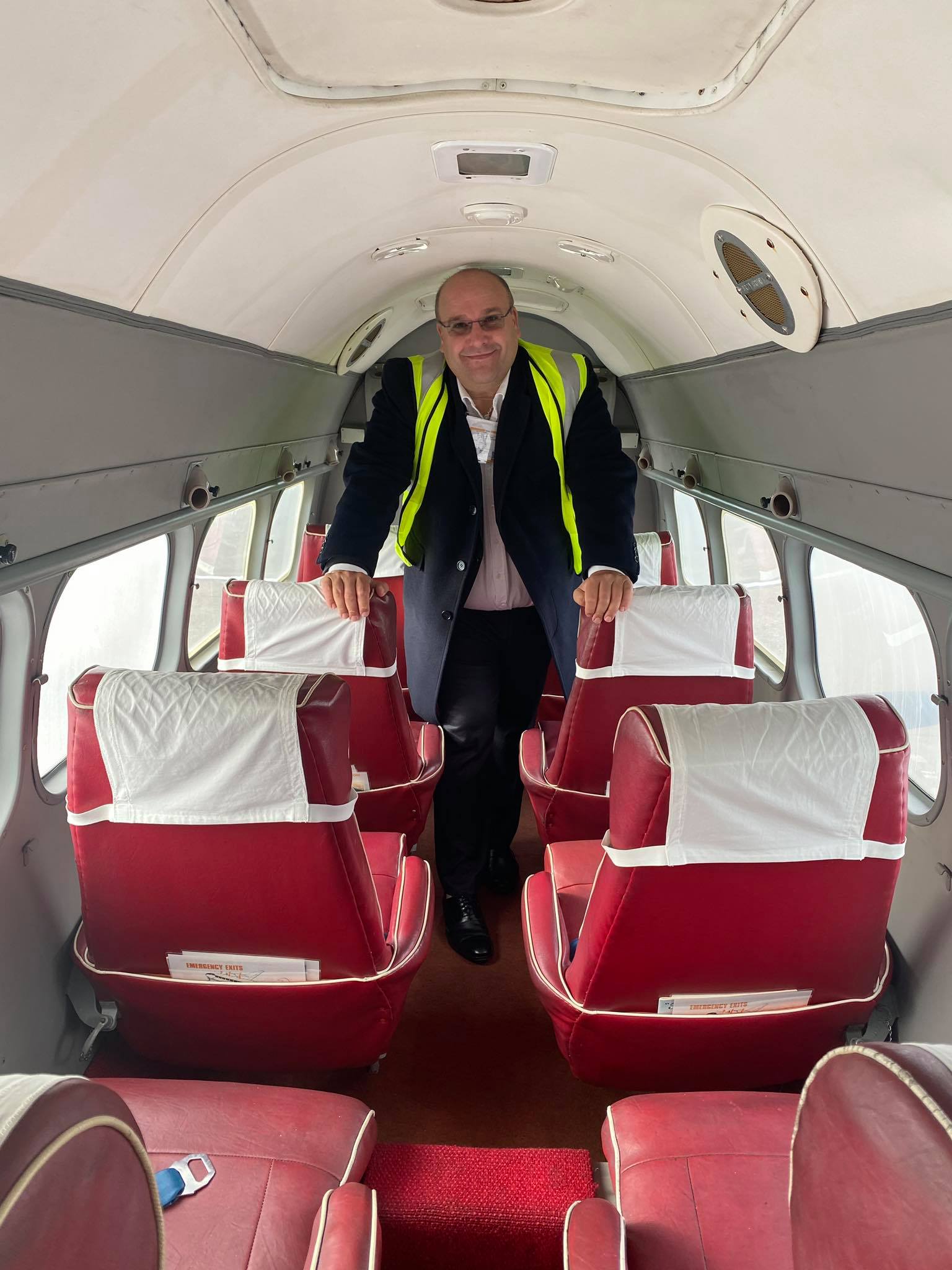 Pictured: Mr Palmer is now calling on the island's community to help restore the Duchess to her former glory.

"We’re very interested in covering the full history and heritage of the aircraft, and pulling that information together," Mr Palmer explained, "...It’s also the case that some specialist skills and effort will be required, so anyone with aviation experience who would like to help and contribute to this, I would love to hear from them as well."

Elaborating on why he believes its so important to restore the plane, he added: “This aircraft is a work of art - if you go look at this tremendously beautiful plane, it shows the rich history of aviation in this island.

“...It’s going to be an incredible asset in terms of education, encouraging interest STEM subjects, engaging young people with aviation and technology, and also providing an additional point of interest for visitors and tourists that will hopefully connect in with the rest of Jersey’s heritage efforts.” 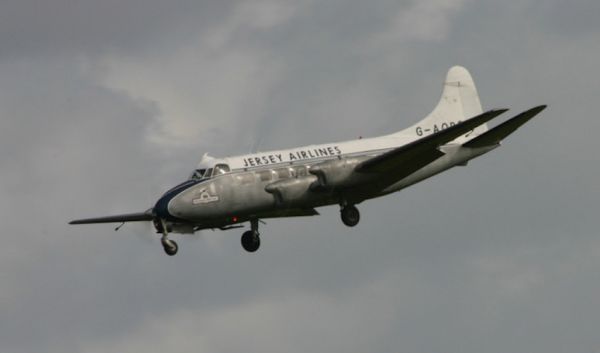 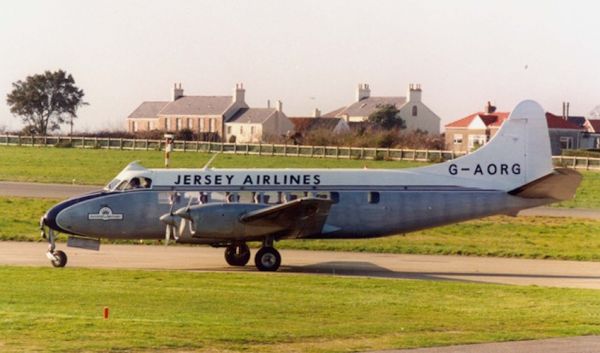 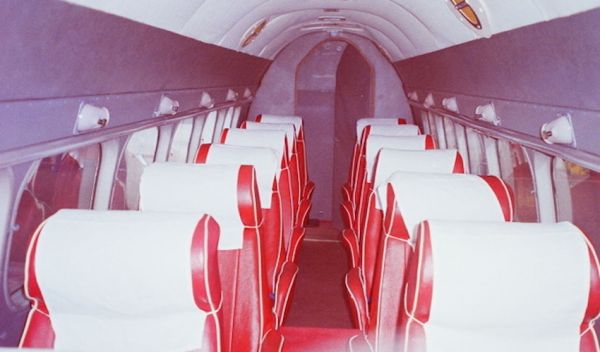 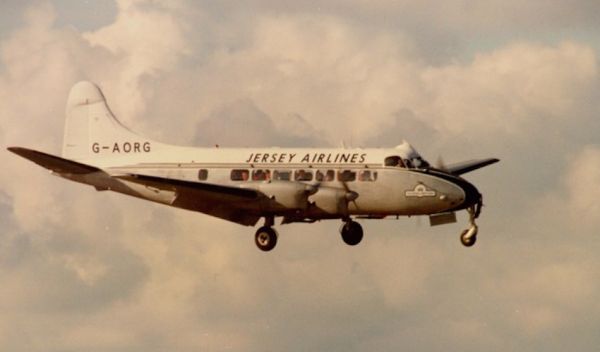 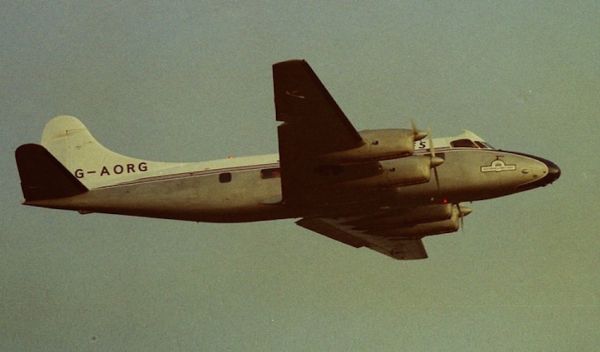 Posted by John Henwood on Mar 17th, 2021
I have very happy memories of flying in the Heron; it was cosy, but comfortable for short-haul journeys and very quiet. I'm pleased the Duchess has been saved and hope Ports of Jersey may find a suitable place for her in their proposed development. They may take a cue from Oatlands in Guernsey where the famous Britten-Norman Trislander G-JOEY has a splendid home suspended from the ceiling of the huge children's play barn where it is a popular attraction.
To place a comment please login Login »