“Historic” UAE deal 'could lead to health and eco investment' 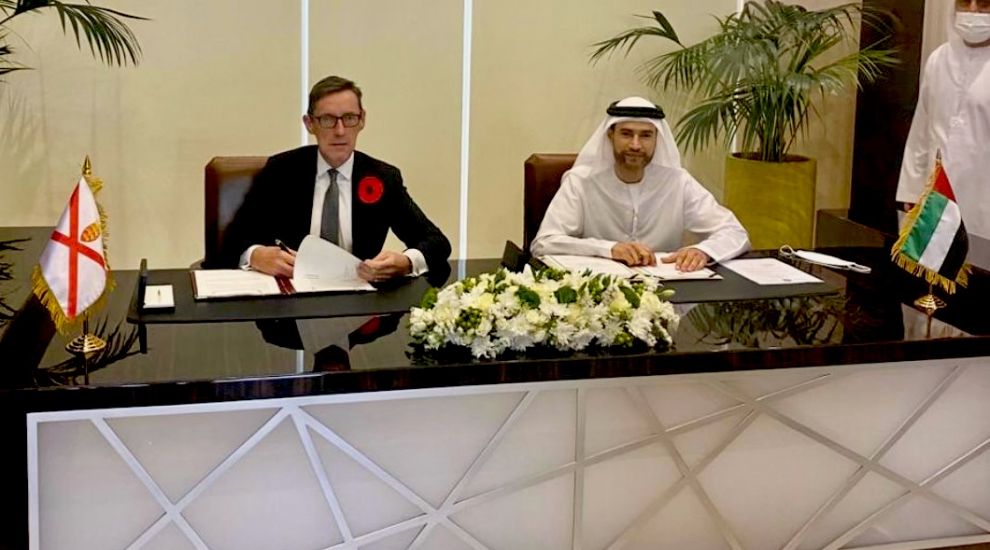 “Historic” UAE deal 'could lead to health and eco investment'

Jersey has struck an “historic” deal with the United Arab Emirates to promote the flow of investment into areas ranging from public health to the environment.

Since the UK voted to leave the European Union, Jersey has been focusing on building its own international connections and attracting foreign investments.

Taking place in Dubai last week, the signing of the Bilateral Investment Treaty (BIT) was the culmination of three years of negotiations.

The agreement is the first of its kind for the island.

The Government explained that BITs aim to stimulate investment from one jurisdiction into another “by providing investors with greater protection and certainty of treatment regarding their investments”. This, it’s hoped, should in turn boost local economic development.

Officials added that the Jersey-UAE deal had been specifically designed to “promote responsible investment including considerations of public health, the environment, and labour protections”.

Delighted to sign with the #UAE Jersey’s first-ever Bilateral Investment Treaty alongside HE Minister Mohamed bin Hadi Al Hussaini at the Ministry of Finance @MOFUAE. This historic agreement will enhance business flows and protect investments between our jurisdictions. pic.twitter.com/2yljTQV9lT

They also noted that the BIT - whose official title is the 'Bilateral Agreement for the Promotion and Protection of Investments' - was “in line” with the island’s economic substance rules, which aim to guard against the creation of shell companies.

He said the it represented “an important milestone in the development of the island’s international relations.”

He continued: “It is vital that Jersey can broaden its own treaty network post-Brexit, including through agreements like BITs, which support the growth in investment between both jurisdictions.

“It presents a positive opportunity for the island to illustrate its presence and significance on the international stage, as well as highlighting our commitment to being an innovative and outward-looking international finance centre.

“This agreement with the UAE will protect Jersey companies’ investment in the UAE, and vice versa, and is a modern agreement that reflects international best practice in investment treaty design.”

It follows the Chief Minister’s first ever official visit to the UAE last month.

During his time in Dubai, Senator John Le Fondré met UAE Ministers and the country’s Chamber of Commerce President, represented the island at the World Expo, and visited Rumailah Farms, which produces dairy products from Jersey cows.

Another great day in UAE including a brilliant tour of @buhaisgeo in Sharjah. Thank you @alqasimi for the tour and good discussions on the UAE's experiences in gaining UNESCO accreditation for a number of sites in Sharjah. #JerseyUAE ???????????????? pic.twitter.com/Gul6E4uvXI

His visit involved a packed agenda: he met Ministers and the Lieutenant Governor, visited a farm with Jersey Dairy's Chief Executives, met Jersey Heritage and Visit Jersey's CEOs at Mont Orgeuil, discussed renewable energy with Jersey Electricity, watched a States Assembly debate about funding for the new hospital, and enjoyed dinner with the Bailiff at the Maritime Museum.

A keen cyclist, he also learnt more about Jersey Sport’s ‘Move More’ programme during a cycle from St. Aubin to Corbière, and visited Les Quennevais and Strive.

Towards the end of his visit, he was awarded the Bailiff's Silver Medal as a sign of "friendship" and another medal from the Lieutenant Governor.

Good to visit @LQSportsCentre and @StriveJersey to learn about initiatives to encourage physical wellbeing. Both #Jersey and the #UAE are working to promote cycling as a sport and a sustainable transport option. pic.twitter.com/wiigvh7Y0h

His Excellency Mohamed Bin Hadi Al Hussaini, who signed the BIT for the UAE, commented: “Signing the agreement on mutual promotion and protection of investments between the UAE and Jersey reaffirms both countries’ leaderships’ ambition to strengthen economic and investment cooperation in various economic and financial fields.

“It also reiterates their commitment to provide the appropriate environment to attract foreign investments in accordance with a legal and legislative system that is in line with best international practices.”

Not all have welcomed efforts to strengthen ties with the UAE, however.

Last year, the Channel Islands Humanists questioned the Government’s commitment to protecting human rights after an economic partnership with the UAE was announced.

Deputy Louise Doublet, who is a committee member, said: “At a time when others are imposing sanctions and withdrawing trade from the UAE over its many human rights violations, not least the abuses that have been committed by UAE-backed forces in Yemen, it is unconscionable that the Government of Jersey is considering deepening our relations with this regime.

“As a humanist, my beliefs are considered a serious crime in the UAE for which I could face imprisonment or even execution. Polling from 2018 suggests that 47% of islanders consider themselves to be non-religious, it is hard to see how the population is like-minded to the regime in the UAE. I, and many other proud Jerseyians, feel strongly that if we are to value human rights and respect the rights of minorities, we must call out, and not embrace, states like the UAE.”

Senator Sam Mézec, who has also previously challenged the Government on its relationship with the country, raised similar concerns during the Chief Minister’s Dubai visit last month.

Just the Chief Minister here saying there is "much to admire" about what he has seen in the UAE.

But there is also much to deplore, like the torture of political dissidents, horrific persecution of gay people and women, plus role in the war in Yemen.

No mention of that though. https://t.co/8f8snJKVu4

A press release issued following Senator Le Fondré’s trip said that he had met with British Ambassador to the UAE, Patrick Moody, while in Dubai, and discussed “the ongoing cooperation between the UK Government and Jersey counterparts including over human rights.”

Posted by Jean Lelliott on Nov 10th, 2021
Could someone please tell Louise Doublet there is no such word as ‘Jerseyians’.

I would like to know more about this ‘Health investment’, it’s amazing how our Government can say so much and reveal so little.
Posted by Scott Mills on Nov 10th, 2021
Health and eco investment. Pull the other one, I'm still waiting for all the "hockey" tourists which £100k grant to the hockey club were going to bring to the island. Still not see one. Well they certainly won't be selling us sand, so what is it? I hope our gov aren't going to employ their human rights over here. No thanks. lovely beaches
Posted by Patricia Le Ruez on Nov 10th, 2021
Just confirms all that has been allowed to happen over the years to our beautiful island, that Jersey has sold its soul and there is no going back !
Posted by Harry Helier on Nov 10th, 2021
Maybe they are selling us sand, the construction industry needs it. Also we have many politicians who just love to bury their heads in it!
Posted by Keith Marsh on Nov 10th, 2021
Well our Government have found the Loans for our new hospital, despite the dreadful human right of the UAE. I would love to think that closer relationship between our countries would result in progress, but I'm not holding my breath.
To place a comment please login Login »