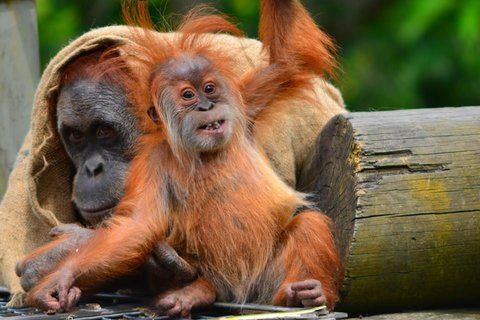 Guests who tucked in to a big food festival last weekend have very quietly helped raise more than £6,000 for Durrell.

Bidders were in with a chance of securing one of many exceptional lots, including a five-night stay at any Small Luxury Hotels of the World property, three nights at The Atlantic Hotel, an Anthony Joshua signed glove and a Daniel Craig signed James Bond presentation.

They helped raise £6,162 for the Hotel's charitable partner.

The Atlantic Hotel's Owner and Managing Director Patrick Burke said: "Once again the Eat Jersey Food Festival was a huge success and the feedback we have received has been fantastic.

"We decided to extend it by a day this year, after the first festival last year went so well. Our own Executive Head Chef, Mark Jordan, and our visiting chefs from the UK, delighted guests with the very best of Jersey produce. We are so lucky to have such fabulous fresh ingredients available to us in the Island – it makes such a huge difference.

"To be able to raise funds for Durrell at the same time is wonderful. The lots we had on offer were of an extremely high standard, with many of them being generous contributions from our Eat Jersey Food Festival sponsors and from the chefs who featured in our event, so I’d like to say a big thank you to all of them."

Visit Jersey's Head of Marketing Adam Caerlewy-Smith said: "The Eat Jersey Food Festival was fantastic, celebrating the best cuisine Jersey has to offer. Events like this play an important role attracting visitors out of season.  The prestigious line-up of renowned chefs showcased our Island’s gourmet produce and the fine-dining experience in Jersey."

Easenmyne's Company Director Martina McGibney said the business was pleased to have been able to support the Eat Jersey Food Festival again this year.

She said: "The team continues to work tirelessly on promoting the best of the Channel Islands’ produce. It’s great that we can play a part by supplying some of the key ingredients for the menu."

Mercury Distribution's Managing Director Nigel Campbell said: "Some great chefs have been working with the best of our local produce. What a privilege for Mercury to be involved with the team at The Atlantic in such an event."