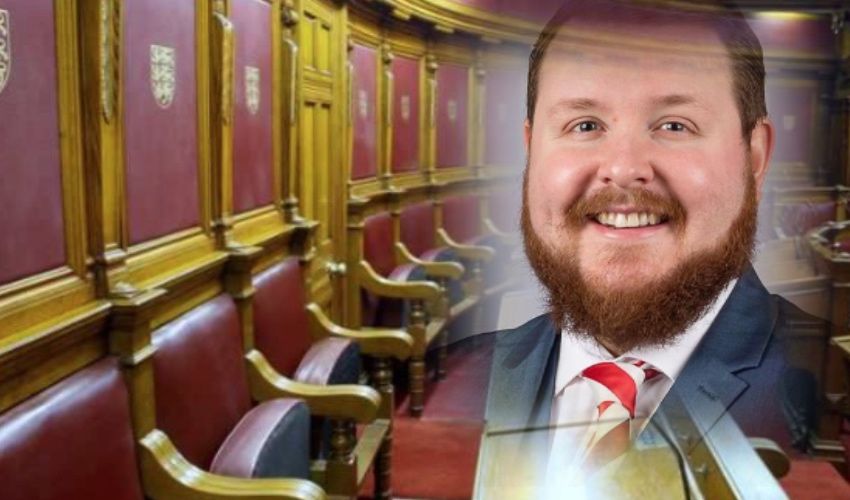 Deputy Jeremy Maçon has given a tearful statement in the States Assembly thanking those who stood by him while he was under police investigation.

The former Education Minister, who was arrested in March and was immediately removed from that role, told fellow Members that he believed he had been the victim of “an extremely malicious politically motivated attack" that was "designed to smear my character, damage my reputation and hurt me personally.”

The investigation into undisclosed allegations against the St. Saviour No 2 Deputy was dropped at the end of last month, without any charge.

In a statement in the States Assembly, he thanked his friends and family for their support and gave special mention to the Constable of St. Saviour, Sadie Le Sueur-Rennard, who publicly supported Deputy Maçon immediately after his arrest.

He also thanked Deputy Scott Wickenden, who replaced him as Education Minister, and other politicians who had given him both political and personal support.

An emotional Deputy Maçon, who had to pause a number of times while he read his statement, was also critical of those who had “attacked” him.

“I have been subject to all manner of vile speculation based on prejudice and bigotry,” he said.

“I have been put on trial by some sections of the media, together with many on social media, who have taken advantage of a time when I could not defend myself or comment publicly on the situation for legal reasons whilst the investigation was underway.

“In my opinion, this speculation abandoned the principle of innocent until proven otherwise. This was together with a total disregard for any fair or due process that everyone should be afforded.

“After 13 years of loyal service to this island, I am appalled by how some have treated me.”

On his “extremely difficult” decision to resign as a minister in June, Deputy Maçon said: “Given the way that my situation was being used inside and outside of the Assembly, publicly and behind the scenes to attack my Government colleagues, which is completely reprehensible, I took what I believed to be the honourable decision to resign.

“I made it quite clear at the time that the decision to resign was in no way an acceptance of guilt nor that it should be interpreted as such and I stand by that decision.”

He added: “While I understand that the police have a job to do when an accusation is made, it nevertheless has been a distressing situation for myself and those close to me.

“Regarding the police, all I will say is that I found the custody officers very professional. I remain deeply concerned that members of the media appeared to be aware of my arrest in advance and question how they would have this knowledge?

“I feel there are several matters of process that could be greatly improved.”

The Deputy of St. Saviour No 1 said he would need to focus on his mental health and wellbeing while continuing to serve as a politician.

“I will not be intimidated out of politics by individuals, institutions or the media,’ he said.

“Should anyone wish to change their political representative then the correct way to do so is at the ballot box during an election.

“It is regrettably the trend in politics towards nastier and more malicious behaviour, and at a time when we are trying to encourage more people to stand, especially those from a more diverse backgrounds. I believe that we all need to be very careful not to follow this path.”

He concluded by saying that he would now “know on whom I can rely, which gives me strength as I move on and as I put this matter behind me as a free and innocent man.”

Posted by gordon le claire on Sep 15th, 2021
this is why any person who face any sort of charge should not be named until they are found guilty .
mud sticks and there are still many people who can not accept someone is innocent even if they are proved innocent and keep pointing them out to others as they got away with it.
Posted by Keith Marsh on Sep 15th, 2021
Totally agree with Gordon, it is time this was changed.
To place a comment please login Login »