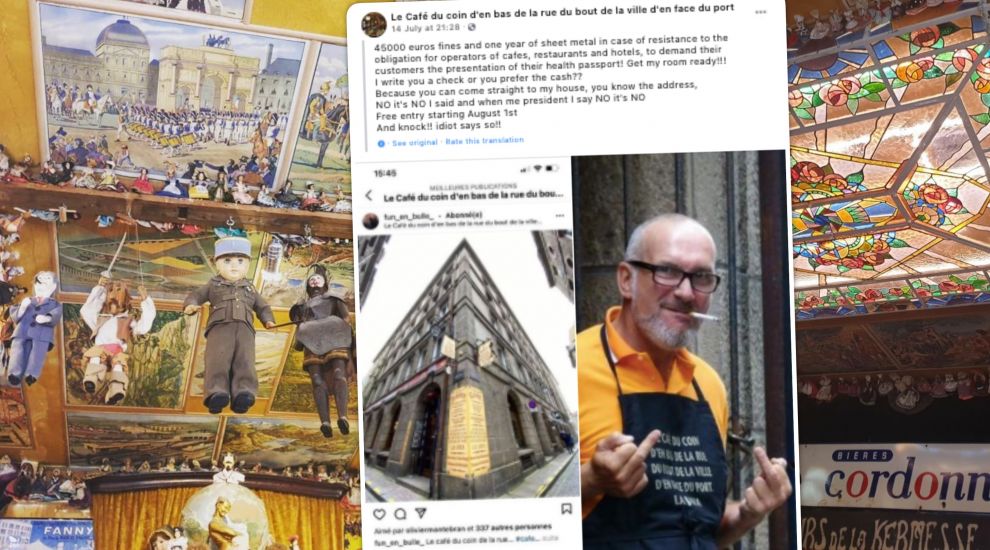 The owner of a Saint Malo café infamous for its wacky doll-themed décor says he has set aside €45,000 and packed a bag for prison because he is refusing to take part in France’s new ‘health pass’ scheme.

President Emmanuel Macron announced last week that the ‘health pass’ will be necessary for anyone over the age of 11 wishing to go into cafés, restaurants, supermarkets, hospitals, care homes as well as for long-distance journeys on planes and trains from the beginning of August.

The health pass serves as proof that the holder is either fully vaccinated, has received a negative PCR test within 48 hours or an antigen test from between two weeks and six months.

It is already required for any event with more than 1,000 people and, from Wednesday, it will become required in any leisure or cultural settings with more than 50 people.

News of the decision has caused several protests in France, with many saying their basic rights are being stamped on.

Pictured: Mr Samoy's café is located in the center of St. Malo.

Jean-Jacques Samoy, the owner of the ‘Café du coin d’en bas de la rue du bout de la ville d’en face du port’, also known as La Java, which will be familiar with many Jersey daytrippers, announced a few days after the announcement he would not be asking patrons to show their health pass.

While he said he was neither for or against vaccination and had received both his jabs to be able to visit his granddaughter in Italy, he said he had been “shocked” by the news.

He added he felt that people were being treated like children with their leisure activities removed as a punishment.

Mr Samoy added that he has already put aside €45,000 to pay an eventual fine and prepared a bag in case he is sent to prison. If establishments fail to carry out the necessary checks, the owners could face up to a year in prison.

In addition to his post, Mr Samoy has also put up a sign in the window of his café, stating: "WE ARE CAFÉ OWNERS, NOT POLICEMEN." “You are all welcome,” he added.

Mr Samoy is no stranger to controversy, having previously engaged in a 'StripAdvisor' protest against TripAdvisor.

The fall-out occurred around two years ago when the site ranked La Java, which receives hundreds of visits from islanders and other ferry tourists every year, 112th out of more than 360 Saint Malo establishments for its cuisine – despite the bar not serving food.

TripAdvisor ignored Mr Samoy's plea to be removed from the ranking, prompting him to retaliate by baring more than just his teeth.

In protest against the reputational damage he says can be caused by the site and its critical commenters, the proprietor posted a series of naked portraits snapped in La Java to Facebook, advising the bar's 15,000 followers: "Truthfully, I'm telling you one has to be superhuman to put up with the cruelty, the mud-slinging, the daily gossip every day of your life until death... So, to all those who brand me a tourist bar (as if it's such a terrible thing to serve lovely people from all over the world!), and as self-centred, smug, temperamental, even fascist, I can offer you no more than... My arse."

One guy who understands Logic
Posted by John Smith on Jul 20th, 2021
Shame we don't have the same view locally and establishments are just happy to do whatever our hapless government says to make sure our enjoyment is frustrated and curtailed. Time to move forwards not backwards and get some perspective on this virus.
To place a comment please login Login »