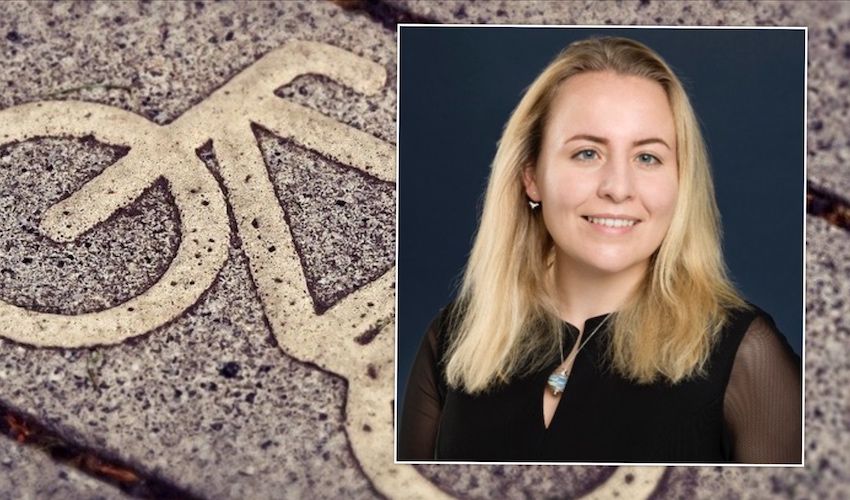 Jersey should “unburden” cyclists involved in crashes with vehicles of their liability for the collision, if it is serious about encouraging green modes of transport, a personal injury specialist has argued.

Rebecca Guéno, a legal assistant from Parslows' personal injury team, has called for the island to follow its Dutch counterparts.

The legal assistant says that changing the approach to crashes between motorists and cyclists would encourage more people to pedal a more sustainable way of getting around.

Describing a collision of this kind as a “conundrum” for personal injury lawyers in Jersey, Rebecca asks, between the bicycle rider and the motor vehicle driver: “Who bears the liability?”

Pictured: Rebecca is advocating for Jersey to "unburden" cyclists to encourage greener modes of transport.

Part of the difficulty in answering this question, Rebecca says, relates to differences in the speed capabilities and protection of each road-user.

“One party is moving at speed, the other may not be. One party is protected – the other only by a thin layer of lycra and a plastic hat (sorry, helmet).”

Looking outside of the island, Rebecca points to the Dutch approach to the issue.

“The Netherlands appears to have solved this conundrum with what we like to call ‘strict liability’ when dealing with collisions arising between motorised and non- motorised vehicles.

“Under Dutch law, in the majority of circumstances, the burden of proof falls upon the driver of the motorised vehicle. In other words, it is assumed that the incident was the fault of the driver, unless the driver is able to prove otherwise."

Pictured: Rebecca thinks Jersey should move to the Dutch system of assuming the driver is liable for the crash.

She adds that, even if the driver manages to prove that there were factors beyond their control, or it was a mistake made by the cyclist which caused the crash, the driver is still liable for 50% of the damage caused.

“The reason being that the cyclist (or other non-motorised road user) usually suffers the most severe damage, which justifies extra legal protection.”

Her comments follow the launch of Jersey’s ‘Sustainable Transport Policy’, which aims to clamp down on petrol and diesel vehicles, and encourage cycling as a ‘greener’ way of getting around.

It was approved in a vote by States Members this week.

The #StatesAssembly have voted to ADOPT The Minister for Infrastructure's amended Sustainable Transport Policy
RESULT 40 FOR vs. 2 AGAINST pic.twitter.com/0ougUOw8Zd

Rebecca notes: “In the wake of green initiatives, surely encouragement of green transport is key. Our island is congested with motorised vehicles, and the number of road-related collisions is increasing year by year. Cycling takes cars off the roads, boosts our wellbeing and aids the environment – what’s not to like?

“Why should we adopt the Dutch approach? On an island nine miles by five, most of which is accessible without needing to take the car, it stands to reason that we should be able to leave the house on a bicycle or on foot without having to first consider whether we can afford to shoulder the blame in the event of a collision with a motorised vehicle.”

Posted by John Ambrose on Mar 13th, 2020
What a crazy idea. Whoever caused the accident is responsible for whether a rider or driver. Cyclist treat motorists with a high degree of distain and often ride irresponsibly.
Cyclists don't have to have compulsory insurance, motorists do. There needs to be more control over cyclists not less. Sorry but the 'green' argument just doesn't hold water when we are talking about individuals taking responsibility for their own actions.
Posted by David Elliott on Mar 13th, 2020
I’m sorry but my thinking is the other way around. Make the cyclist take greater responsibility. If they’re using the road they should have at least 3rd party insurance You can assume that over 60%have insurance for their bike So therefore they look after their own interests but claim no responsibility for the people the collide with and the cars they scratch
Posted by Jon Jon on Mar 13th, 2020
Bring back tax number or tax plates for bikes, yes some can be sensible but most aren't ,they need to learn the Highway Code!
Posted by Adam Tomkins on Mar 16th, 2020
If want to use the Dutch of even other nations such as Denmark whom have a high level of cyclists, you need to look at their infrastructure, they have designated cycle tracks, the citizens comply with traffic lights, priority is given where correct. We have narrows winding roads where some cyclists are irresponsible, the amount that just pull out onto the road in St. Peter’s valley to switch sides is ridiculous. Why should I take responsibility for a cyclist pulling out on me and causing an accident?
To place a comment please login Login »