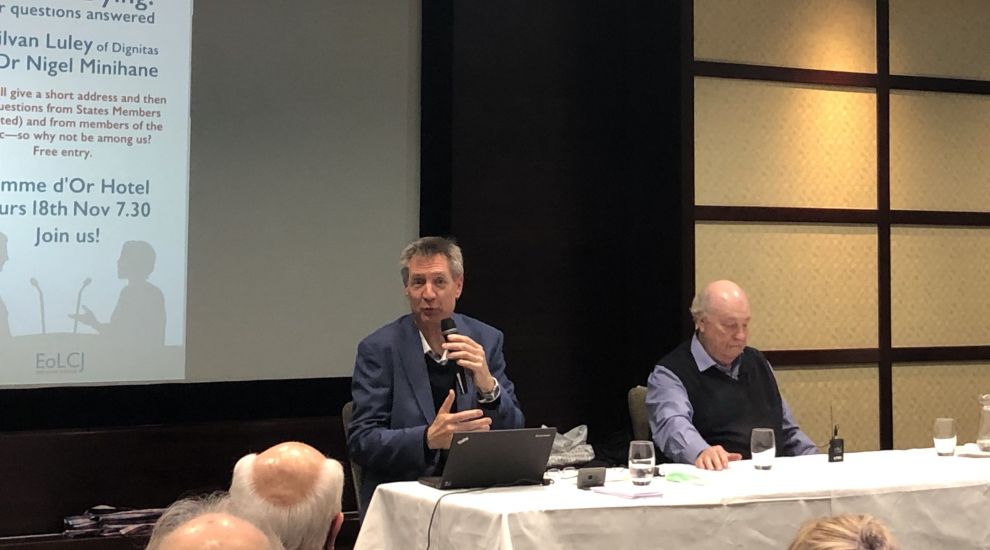 Ahead of Jersey’s key political vote this week on whether to allow assisted dying, Express spoke to a member of the board at Dignitas to understand exactly how it can work in practice.

‘Dignitas – to live with dignity, to die with dignity’ – ‘Dignitas’ for short – is a non-for-profit assisted dying organisation based in Switzerland.

It is clear that its ultimate goal is “to become unnecessary, to disappear” in line with improvements in palliative care, suicide attempt prevention, advanced directives usage and the right to freedom of choice in death in jurisdictions worldwide. However, until then, it sees itself as a “solution for the time being."

With assisted dying not possible in Jersey, recent years saw terminally islanders Roberta Tupper and Alain Du Chemin book places with Dignitas, though neither ended up actually using its services before they passed away.

Their stories nonetheless sparked debate about whether Jersey should allow assisted dying – discussions that led to a Citizens Jury being created, and legislation tabled on the matter of assisted dying, which will be debated this week.

Put forward by the Council of Ministers, the proposals relate to an ‘in-principle’ decision. If approved, details of exactly how assisted dying would operate in Jersey would need to be worked out.

At the request of campaign group End of Life Choices, lawyer and Dignitas board member of nearly two decades Silvan Luley was last week in Jersey to talk about the practical aspects of assisted dying ahead of the key vote.

What type of ‘assisted dying’ does Dignitas offer?

Swiss law does not allow for euthanasia – in other words, a third party ending the life of someone at their request. What is offered is known as an ‘accompanied’ or ‘assisted’ suicide – where the patient must self-administer a fatal dose of medication themselves, but in the company of professionals.

In order to get the ‘green light’, a robust case of medical evidence must be presented, and interviews with professionals confirming that an individual has capacity and is acting of their own free will completed.

According to Dignitas, the process tends to take around four months.

What medication is used?

Individuals are given a dose of sodium pentobarbital to drink.

Explaining how it works, Silvan Luley said: “Pentobarbital is a medication which was invented over 100 years ago – it’s well known – and it’s been used as a sleeping medication for many decades, but there’s a risk to it if you take a little bit too much, you go into quite a long sleep. And on top of that, it affects your remembrance, which means you might take a small dose and you forget that you took a small dose to sleep, and take another dose and suddenly you have too high a dose and you slip over to the other side.

“…What happens with pentobarbital from a certain dosage onwards, it’s the same effect as, have you ever had surgery with full anaesthetic? Same effect.”

The sleep comes one to three minutes after drinking it, and death usually follows 20 to 30 minutes later.

Can it go wrong?

“An important point is pentobarbital is not a poison… it’s a sleeping medication, which means that someone, say a Parkinson’s patient, is shaking the glass and just taking a little nip, what will happen is that the person will fall asleep – perhaps for six, seven hours, wake up again and then recover fully. We’ve had that at Dignitas. It’s a self-administering problem. The person in Switzerland has to self-administer it.”

Addressing some critics’ contentions that difficulties with some assisted deaths around the world have led to a prolonged and potentially painful passing, Mr Luley said: “Let’s get the facts straight – there are horror stories around [about assisted dying] and these horror stories are not entirely wrong, but they stem from a different judicial system. The problem with the Oregon law is that the patient is allowed to take the medication home after prescription – there is no one there accompanying the person in the final days, there’s no professional there making sure the patient takes the medication at the right time, with the right dose, in the right way so that there’s no failure.

“We don’t have that in Switzerland. There is a chain of custody on the medication which means that the medication is never going to the hands of the patient.

“I know that many elderly people wish to have medication in their cupboard to take their time. I’m fine with that from a liberal, progressive-thinking point of view but from a practical point of view there’s a risk to it that at the time you take it, you might botch it. You might make a mistake. You need to take an anti-medication at the right time before taking that initial medication. You need the right dose and if you don’t do that, there might be a failure. But if you are professionally accompanied through the process, this is what’s happening in Switzerland and is also suggested here for Jersey, then the failure rate is zero.

“We have in Switzerland, in over 3,200 assisted deaths we have done at Dignitas, there’s been no failure. Why? Because we educate our staff, they are professionally trained.”

How are Dignitas staff selected and trained?

“The most important thing is education. For the work we do at Dignitas, you can’t do an apprenticeship and you can’t do studies, but a background of social care, psychology, nursing and so on, is of course a huge asset to understand complex matter… I wish there was an apprenticeship or a university study for that, but it does not exist yet.”

Dignitas therefore conducts most of its training internally.

“Much is training on the job and we ask for external experts to come in and do training. We have one year of coursework in Western medical science that people have to go through and the actual process of befriending, being there at the accompanied suicide, is learning on the job. Experienced older staff go with new staff,” Mr Luley explained.

As well as undergoing psychological pre-tests, new team members go through a ‘probation’ period to see if they are the right ‘fit’ for the organisation.

“I can’t remember in my 18 years that we ever had to tell someone, ‘You’re not fit to work.’ There was always the person themselves after working two, three, four months they’ll realise, ‘It’s not the right thing for me. It doesn’t feel good.’

“No problem! You can stay working here as long as you want, look for a new job, we’ll pay for the time, we’re not going to sack you. You sack us, and you will be paid fully until you’ve got a new job.”

How is staff wellbeing looked after?

Mr Luley says Dignitas is acutely aware of how emotionally onerous the day-to-day work can be for staff, which is why it operates the ultimate flexible working policy.

“Everybody only works part-time at Dignitas and everybody chooses themselves how many days a week or in a year they work. For this reason, we have quite a lot of staff,” Mr Luley explained, noting that some staff opt to “only work two or three days and they have other jobs, other things they do.”

“The next thing we do is free choice: you are not forced to work or take on a case. You can work on a case, but if you feel uncomfortable, you can give it to a colleague… If I have a bad day, I can walk into the office and say, ‘Guys, I have a bad day and I don’t want to take any calls from patients.’ They can do that. Our staff can do that, I can do that, and that’s respected.”

Counselling is also available for anyone who needs it.

“Anyone can take advantage of as much counselling as they want and anonymously send us the bill and the organisation will pay for it.”

Despite all members of staff being part-time, Mr Luley said Dignitas was keen to ensure their staff are still well-salaried in recognition of what they do.

“We pay quite well, even though we only work part-time. People don’t necessarily have to take another job. I, being one of the board members… I earn only very little more than our staff.”

Allied to that is a management structure with “almost no hierarchy”, helping staff feel freer to share their views on matters.

“We exchange constantly among each other. Even though I’m ‘superior’ in the sense I’m a board member from a work-legal perspective, we all see each other as colleagues.

“Everyone brings in their views, and we discuss cases and look for the best solution for that person and quite often colleagues have better ideas than I have, or sometimes I have the better ideas, and we exchange on that.”

Summing up Dignitas’s approach, Mr Luley said: “This is social care, this is medical care and we have to treat our own people the way we treat people turning to us. Anything else would be unlogical. I would feel bad. It would be against my personal ethics to treat my fellow colleagues differently to what I treat the outsiders.

“We have a lot of liberty. It’s so important because you’re dealing with cases that are just mind-blowing - how much suffering can a person take? And it can get to you when it’s too much. You need time off, you need a moment to let off steam or go for a walk or say, ‘Ok, I’m doing a different kind of work, I’m not going to talk to patients.’

“And all that is possible,” he emphasised. “It must be possible.”

Pictured top: Silvan Luley, on the left, at the End of Life choices event.