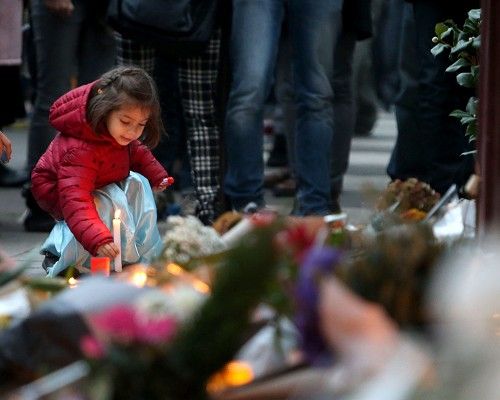 Law enforcement and intelligence agencies across Europe will continue the investigation into the Paris terrorist atrocities as the UK was braced for news of more British fatalities.

A "handful" of Britons are feared to be among the dead after gunmen and bombers rampaged across Paris, carrying out the worst terrorist attack in Europe for more than a decade.

Home Secretary Theresa May will chair a meeting of the Government's Cobra committee to consider the latest information on the massacre and the UK's response.

The first British fatality was named as Nick Alexander, who was selling merchandise for rock band Eagles of Death Metal when their concert was targeted by members of the Islamic State (IS) terror cell thought to be behind the attacks in the French capital.

The death toll among Britons is expected to rise, and the total loss of life in the atrocity has been revised up to at least 129, with 352 people injured, 99 critically.

A UK Government source said: "We know of one death already, we fear there may be a handful of British fatalities and about the same number are being treated for their injuries in hospital."

David Cameron earlier warned that the UK should "be prepared for a number of British casualties", as he told the French people: "Your fight is our fight."

During the attacks, scores were killed alongside Mr Alexander at the Bataclan concert hall, two suicide attacks and a bombing took place at the Stade de France stadium where French president Francois Hollande was among thousands of football fans watching the national side play a friendly against Germany, and gunmen targeted bars and restaurants in the 10th and 11th arrondissements of central Paris.

Details about the terror cell which carried out the attack have started to emerge as authorities across Europe carried out investigations.

:: One of the suicide bombers at the Bataclan has been identified as a young Frenchman flagged in the past for links with Islamic extremist activity.

:: Suicide bombers who targeted the Stade de France were found to have Egyptian and Syrian passports.

:: One was reported to have had a ticket for the game and detonated his bomb after being stopped by security staff trying to enter the stadium.

:: The authorities in Athens said the holder of the Syrian passport had passed through Greece as a refugee.

:: Three arrests linked to the deadly attacks in Paris were made by the authorities in Belgium, after a car with Belgian number plates was seen close to the Bataclan.

:: Family members of one of the attackers - a Frenchman born in the Paris suburbs - have been detained, the Paris prosecutor's office said.

A joint statement issued by European Union leaders vowed to " face this threat together with all necessary means and ruthless determination".

It added: "Everything that can be done at European level to make France safe will be done. We will do what is necessary to defeat extremism, terrorism and hatred."

French prime minister Manuel Valls vowed to "destroy" those behind the attack, promising to continue striking at IS in Syria and Iraq.

Mr Cameron has promised to "further enhance" co-operation and information-sharing between the UK and France "to ensure we are doing all we can to identify and stop those who threaten us, whether in Syria and Iraq or closer to home".

Mr Cameron said the terror threat level in the UK would remain at "severe" but the Paris attack would prompt a review of plans and suggested the threat posed by Islamic State was "evolving".

The Prime Minister said: "The events in Paris are the worst acts of violence in France since the Second World War, the worst terrorist attack in Europe for a decade, a horrifying and sickening attack.

"Our hearts go out to the French people and to all those who lost loved ones.

"Today the British and French peoples stand together as we have so often before in our history when confronted by evil."