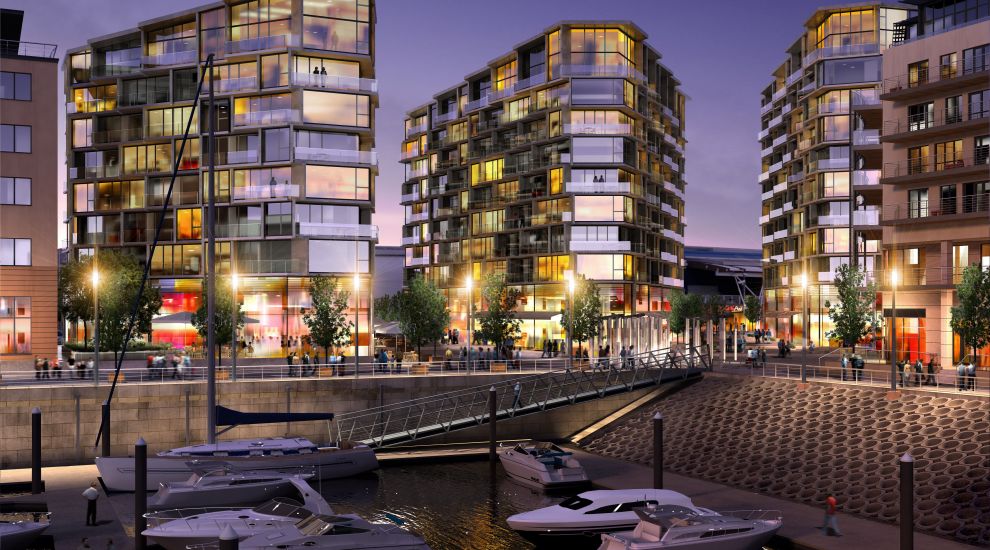 The Jersey Development Company is borrowing £6million for a new Waterfront housing development that promises to "set a new standard in luxury waterside living."

Construction is due to start on ‘Horizon’ – a complex of 280 one and two-bedroom apartment and penthouse apartments next to Castle Quay – next summer.

Planning approval was acquired some years ago, but JDC are still yet to begin works. JDC now plan to borrow money to fund it because they’re not ready to sell IFC1 due to its reduced value as a result of unlet space.

Authorised by Treasury Minister Senator Alan Maclean, the company will instead borrow £6million from HSBC over a five-year period as “bridging finance” for the new housing scheme.

Pictured: Where the 'Horizon' complex will be built. (Google Maps)

Lee Henry, Managing Director of JDC, told Express that works should get underway in July 2018, but only once at least 70% of the units had been sold. “Based on the experience at College Gardens, we were at 80 to 85%. Between now and July, we believe that’s very deliverable,” he said.

While Horizon is yet to officially launch, Mr Henry said that over 550 islanders had already expressed interest in the development based on the teaser website.

A collection of buildings, restaurants and retail spaces, Horizon will house 131 one-bed apartments, 150 two-bed apartments and 35 top-floor penthouses, which have been designed by Skidmore, Owings and Merrill – one of the world’s largest architecture firms.

The starting point for prices will be around £250,000 for the one-bedroom units, with the “vast majority” from £250,000 to £500,000 according to Mr Henry. Larger units facing the sea and marina could be “considerably more”, however. 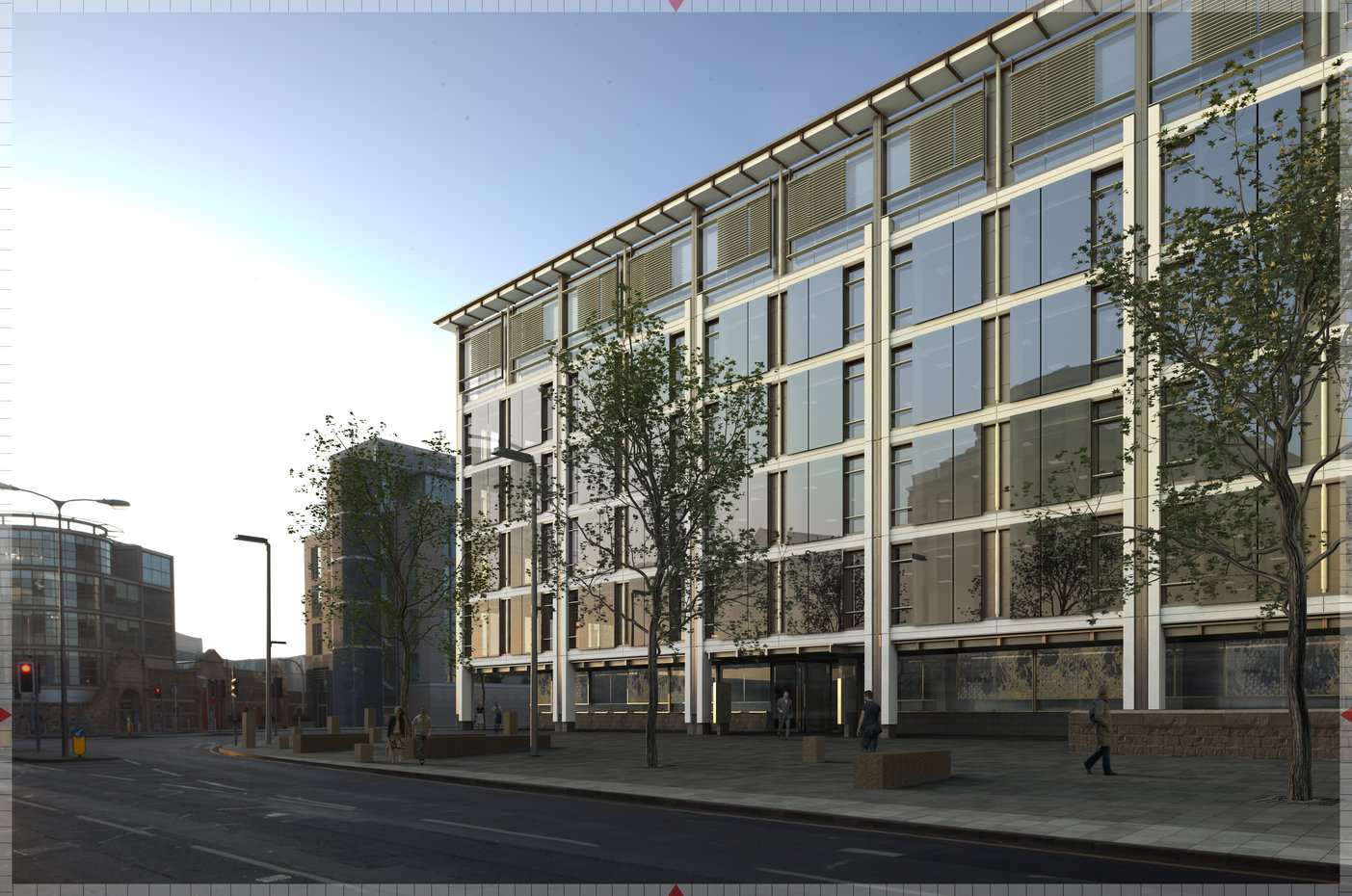 Pictured:  JDC will borrow £6million from HSBC to fund the development, having decided not to sell the IFC because of its reduced value due to unlet space.

Mr Henry explained that the company were hoping to create a luxury “village environment.”

“We’re looking at providing amenities for the residents but also trying to create something down there that draws people to the Waterfront and is attractive for people to visit. The focus is quite heavily on restaurants and coffee shops and that sort of food and beverage activity.”

Such food outlets, Mr Henry hopes, will include a family restaurant, a medium-to-high-end restaurant and potentially a deli-style premises. “We’re not looking for any bar because we don’t want that to impact from a sound perspective on the residents… You can have a wide shop with deli food as well where you can go in for a glass of wine and bite to eat as well. Then you’ve got ancillary activities – a high-end ice cream parlour or a florist. Those sorts of things.”

He added that the development does not aim to compete with the high street, and will instead focus on tapping into the fitness and wellbeing market. “We’ve been very conscious of the impact the development could have on the high street and certainly in the IFC we’ve taken a positive step not to have any retail on the bottom of our office blocks. Some food and beverage going into IFC 5 and IFC 6, but no retail. The same would translate down here… Having said that, there may be some lifestyle brands that could see themselves as complimenting the environment down there, particularly the fitness side of things with Aquasplash and Fitness First on their doorstep.” 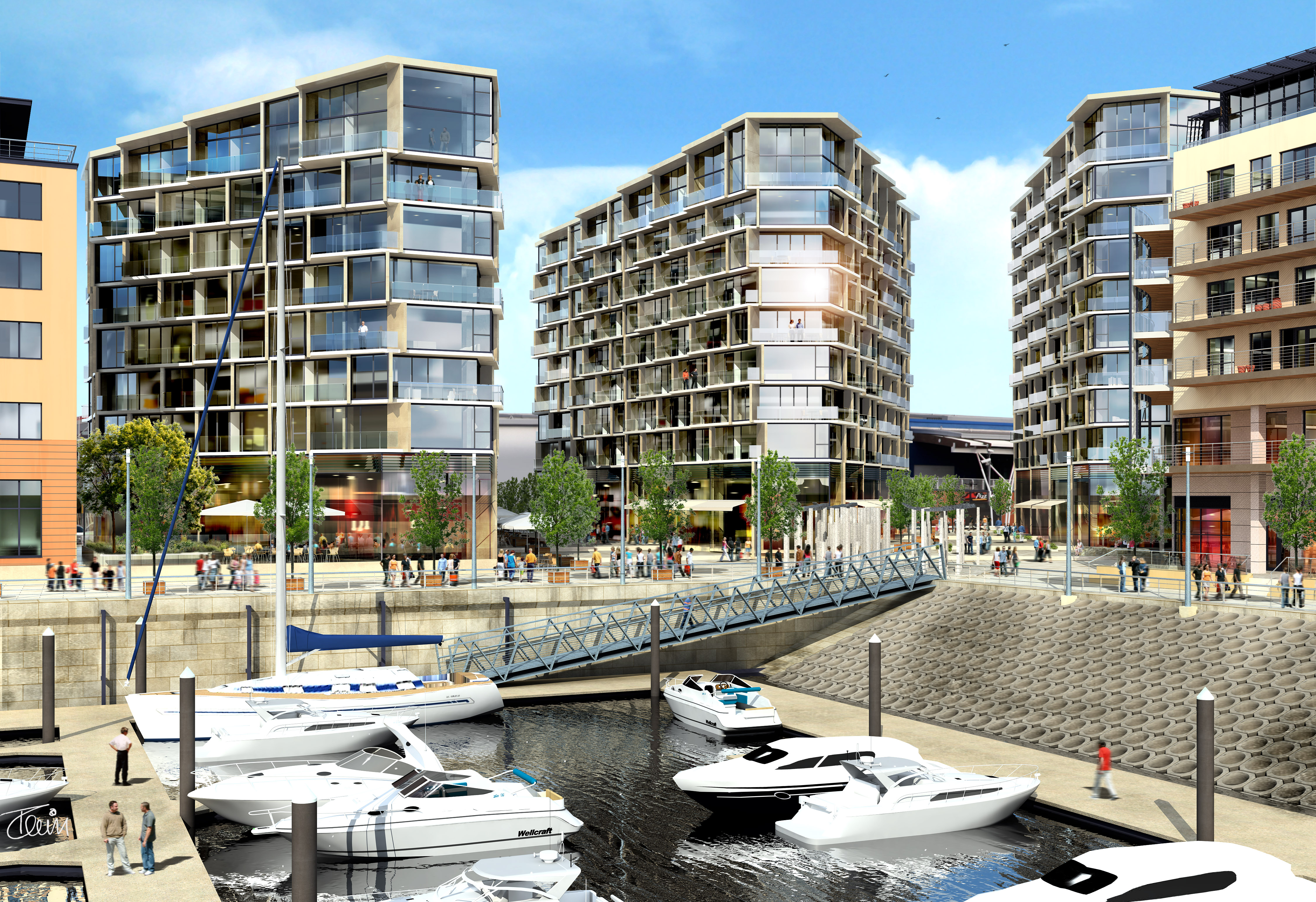 Pictured: A daytime view of the Horizon development. (SOJDC)

He added that JDC have already “had conversations” with potential buyers and leaseholders who will occupy the 12 units (20,000sq ft) of commercial space. Those discussions should conclude “within the next few months.”

“It’s a positive thing for the residents looking to pre-purchase these units knowing who is actually going to be trading from the ground floor.”

Works will start with the building closest to Castle Quay, with the company hoping to “seamlessly” progress from one stage to the next. They will finish with the building closest to the Radisson. He confirmed that noise mitigation will be put in place for neighbouring residents in the Castle Quay complex, such as using a more expensive but quieter technique for laying the basement foundations which does not create vibrations. He also assured residents that no construction work will be undertaken past 18:00 on weekdays or past 14:00 on Saturdays.

Mr Henry declined to reveal the estimated cost of the entire development. “It’s all being estimated at the moment, we’ve got to go and get quotations for the build. We’ll have a greater degree of certainty on all of that in early next year. We’re working on fairly detailed estimates, but it isn’t appropriate for us to disclose at this stage what the overall cost is,” he said.