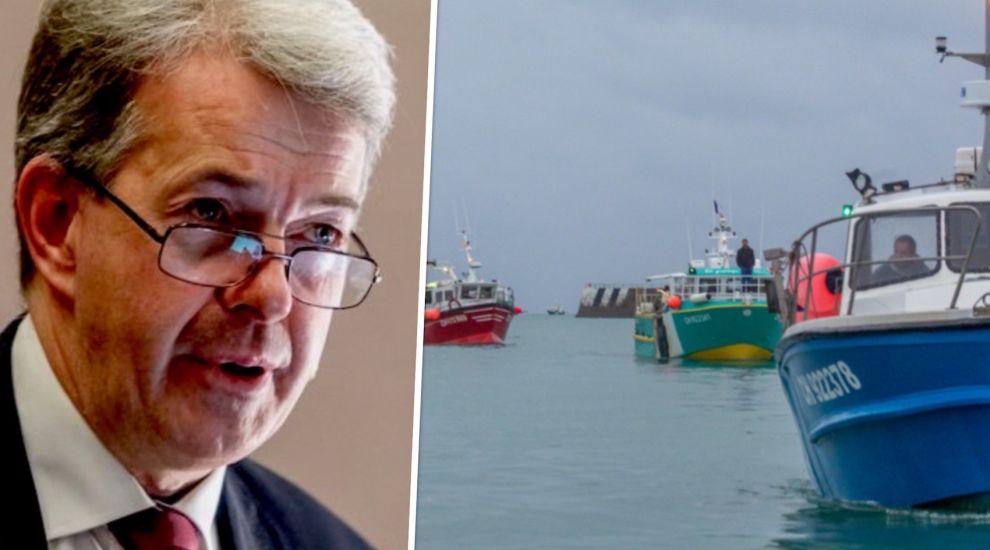 Jersey officials had to resort to buying commercial data about French boats’ fishing patterns to help the licensing process along because they weren’t getting adequate information from France, the Chief Minister has revealed.

Alongside the UK, the island has been locked in a row with France over the number of licences granted to its fishing boats under the post-Brexit regime.

Jersey has so far granted more than 160 temporary and permanent licences, but says it hasn’t seen anywhere near enough data in respect of 55, which had to cease fishing in Jersey waters from Sunday.

French Ministers had suggested that the refusals were for political reasons, culminating in threats to block Jersey boats from its ports, which President Emmanuel Macron put on hold late last night to allow talks on finding a solution to continue.

However, Jersey has always maintained that the problems were technical, and that any vessel that could provide proof – including low-tech logbooks – that it had fished for at least 10 days in island waters in one of three years could have a licence.

Though a seemingly simple request, Senator John Le Fondré shed light on the difficulties the island had been having in securing the information it needs during an interview with Times Radio.

Explaining that he found it “difficult to understand” why many French boats hadn’t been able to produce the required information because the previous Bay of Granville agreement “laid down requirements for them to record their fishing records.”

During May’s flare-up in fishing licence tensions, which resulted in scores of French fishers storming St. Helier harbour, Home Affairs Minister Deputy Gregory Guida said that the paperwork sent to Jersey up to that point was full of “horreurs”, including missing and duplicated documents.

The Chief Minister went on to reveal that, to plug evidence gaps, the Government had ended up purchasing commercially available data.

“[It] gives us that extra richness, if you like, of where fishing boats actually have been fishing. And the difficulty we had is sometimes that doesn’t correlate with the information we’ve been getting – in other words, it shows fishing boats fishing near our waters, but not in them, and that’s the difficulty.”

He continued: “Part of the problem is the system that France is using in part is based on some very large grids, which anybody can Google, actually. One goes from our east coast, all the way through Normandy, to the D-Day landing beaches on the other side, and waters on that side.

“The point is, fairly obviously, our fishing territory doesn’t extend to the Normandy D-Day landing beaches.

“…Some of our guys have been doing this for 18 years, and know a lot of the boats that, frankly, in Normandy’s case, come straight out of their ports and basically almost have no choice but to fish in our waters.

“So it was really trying to help, and identifying the ones that genuinely fish there and others who in the past had… the permission to do, but never actually exercised it, and that is what is different about the TCA [UK-EU Trade and Cooperation Agreement], and they have not exercised it for quite some time.”

Senator Le Fondré emphasised that even the 55 vessels on the ‘red’ list still had the opportunity to prove their right to fish in local waters.

“Obviously if they come back tomorrow and say here’s the data, then they’ll get a licence,” he said.

Following crunch virtual meetings last night between UK, France and Channel Islands officials last night, it was decided that sanctions would be put on hold and discussions would continue. This will include a meeting between French European Affairs Minister Clement Beaune and UK Brexit Minister Lord David Frost on Thursday.

We have set out our response to the statement from @CBeaune this evening.

I look forward to our talks in Paris on Thursday. https://t.co/ctUSKp3d5L pic.twitter.com/O6iqM9eu5Q

Welcoming the continuing talks, Senator Le Fondré said that he hoped they would be “based on facts and evidence, which is what the TCA should be about, this should be a technical discussion.”

He added: “Let’s allow the discussions to proceed and let’s hope the rhetoric dials down and we focus on data and evidence.”

His message was echoed by Deputy Guida in an interview published on TV channel France Info's website this morning.

"If you can prove 11 days of fishing, no matter which of the three years in Jersey, you'll get a licence. The evidence that has been drip-fed to us has arrived late, been of low quality and often with errors that we pick up.

Deputy Guida continued: "If you give 11 fishing records with 'Bay of Granville' marked above, you have a licence.

"In certain cases, it has been us that has provided the details because we didn't get them from Brussels. We have bought AIS data, the information from the marine trackers to confirm that the boats that we know where in the water because we know that such a boat was there all week.

"We didn't see details come from France and therefore it's us that did the research. We bent over backwards to try and give the most licences we could, on the condition that there was evidence. And this evidence never arrived."

Posted by nigel pearce on Nov 2nd, 2021
Why on earth were we paying to get the data? Surely if the French boats wanted a licence, they are the ones who should have been paying for the data!
Posted by Private Individual on Nov 2nd, 2021
Agreed Nigel, it's absurd.
Posted by Keith Marsh on Nov 2nd, 2021
How much of OUR (Jersey Taxpayers money) has this Government spent on getting this information to help FRENCH boats fish in OUR waters ?
It really is time that this "lot" were gone ~ they are underhand and not upfront honest..
Posted by Jo Collins on Nov 3rd, 2021
I hope our government are sending this bill onto the uk tax payer. After all they are responsible for this catastrophe.
Posted by Peter Richardson on Nov 3rd, 2021
Its all about Macpoleon creating trouble to assist his election campaign in the Manche and Normandy area. I would not be surprised to find that data was withheld in Paris to create this "problem" but the process could have been better explained by Mr Gorst. I understood the original agreement which has been superceeded required all French boats to maintain a log of fishing in CI waters and it was this log that we asked for. If they cant provide that then they were fishing illegally all along so should not have licences now.
Posted by Glenn Cowie on Nov 3rd, 2021
Why?? So, again Jersey is out of pocket to meet the demands of France. Demands they appear to be supporting with threat and retaliatory measures. Send them the bill, and refuse to do anything further until it's paid. This island, and those that run it, are a laughing stock. Stand your ground, for once.
To place a comment please login Login »