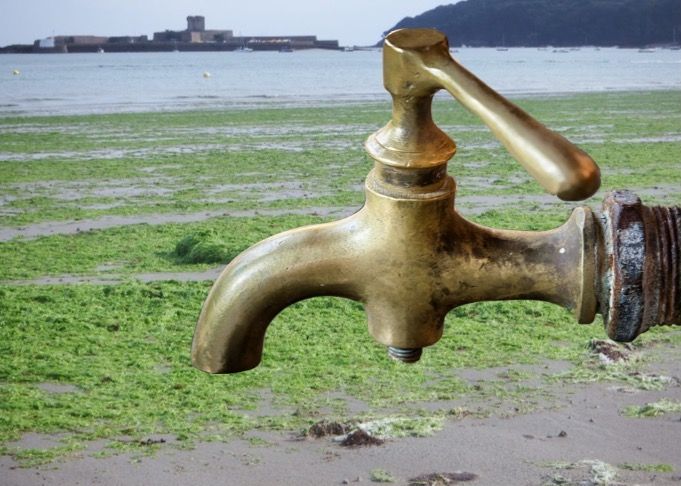 The chemical responsible for the island’s sea lettuce misery has repeatedly hit headlines in recent years after it was revealed that the quantities present in the island’s water were in breach of EU regulations – but a new report says nitrates “were at their lowest levels ever” in 2017.

It was also good news for pesticide levels, which can in extreme circumstances force the closure of whole reservoirs.

Instances of the argricultural chemicals being found in the island’s streams halved last year. The result followed a clampdown on farmers’ use of such chemicals.

The news was shared by Jersey Water Chairman Peter Yates in the company’s Annual Report. In it, he described 2017 as an “unusual” year.

“From a water supply perspective 2017 turned out to be unusual in many respects. We started the year with reservoir levels at their lowest since 2001 and saw an unusually dry start to the year. This had profound effects on raw water quality during the year; nitrate levels in water were at their lowest levels ever and we saw half the number of pesticide breaches in streams and reservoirs,” he commented.

The issue of how to deal with nitrates in the island’s water supply has been a contentious issue for many years, after it was revealed that the island’s nitrate levels were in breach of EU regulations. The finding led to the Environment Minister issuing an exceptional dispensation.

Alongside pesticides, nitrates in Jersey water were found to be linked with the green sea lettuce that cloaked St. Aubin’s Bay during the summer, leading to concerns over the impact on tourism and the amount of money the States were forced to repeatedly spend on clean-up efforts.

But the report stated that the current situation was a far cry from this. They said that nitrate levels in treated water were found to be “well below” both EU and Jersey regulatory limits. Pesticides such as oxadixyl were also within permitted limits.

Overall, water quality was reported as being “very good” in 2017, with a compliance rate of 99.98% based on 15,000 analyses performed throughout the year.

The report also revealed that lower levels of leakage and a wet summer meant that consumption of water across the island fell by as much as 3.2% last year to 7.43billion litres. It also reflected on Jersey Water’s financial situation, showing that the company generated £3.3million in profit last year – a slight reduction of £38,000 from 2016.

Chief Executive Helier Smith commented: Jersey Water’s Chief Executive, Helier Smith, said: “We are pleased with our financial performance and with our water quality results for the year. Both are testament to the hard work of everyone in the team at Jersey Water. We are committed to providing the best service and value for our customers and are very proud of the excellent results from the customer satisfaction survey. We will work hard to build on that firm foundation in order to ensure we continue to meet the needs of our customers in the years to come.”