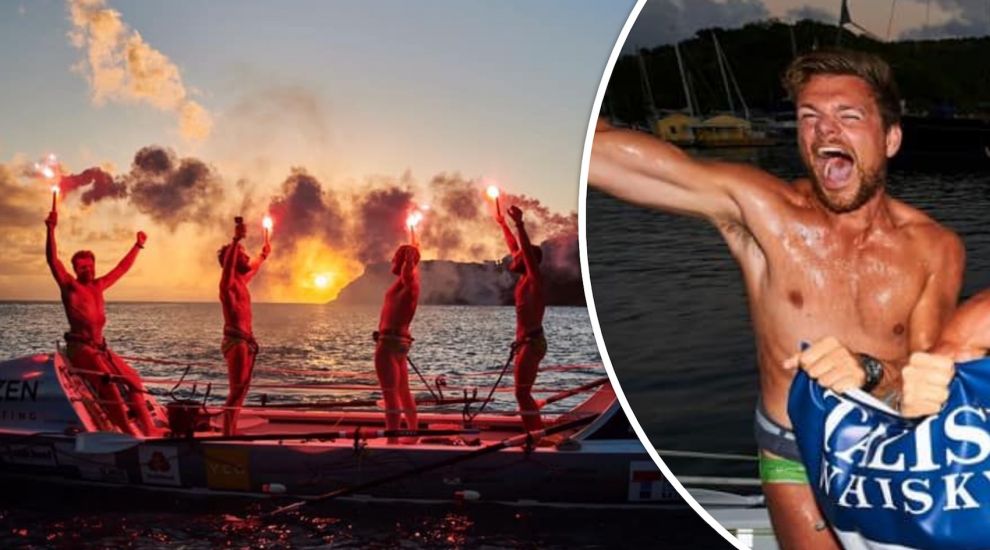 After barnacles, blisters and several pairs of 'budgie smugglers'… a Jersey man has smashed the ‘world’s toughest row’ across the Atlantic Ocean, raising thousands for teen cancer patients in the process.

Having set off from the Canary Islands on 1 December as part of a bid to raise £100,000 for the Teenage Cancer Trust, the group reached the finish line on the Caribbean island of Antigua in 36 days, 10 hours and 31 minutes.

Despite teams of Danish Army veterans and British submariners “snapping at their heels” as they entered the final stretch according to Rufus’s father, the group powered ahead, taking the title of third-placed group of four by sunset.

The journey was one of intense ups and downs for the Dorabros, who enjoyed sightings of dolphins, sharks and shooting stars, while also facing blisters, bashed limbs, seasickness, “sense of humour failures”, 10-metre-high waves, and even a capsize that threw them out of their boat.

But none of those obstacles managed to break the spirit of the group sponsored by Budgy Smugglers, whose designs they sported throughout.

The pattern of rowing consisted of two hours’ hard rowing and two hours’ off 24/7 – even on Christmas Day, when they tucked into a ‘dehydrated’ Christmas dinner.

As they slipped into a rhythm, each of the ‘bros’ assumed a role.

‘Barnacle Boy’ Rufus – who discovered his rowing talent while at Edinburgh University, before reaching Team GB standard – was responsible for keeping the bottom of the boat free of small creatures every four to five days to ensure optimum speed by ridding rid the craft of any unnecessary resistance.

An Instagram video showing Rufus attending to the task described it as “a chance to stretch the legs and release your inner merman”, before adding: “…All fun and games until you see a shark, though…”

Other highlights of the trip were also captured on the Insta-feed, which provided a humorous insight into the team’s progress – as well as their varying levels of facial hair.

Emotions ran high as the group reached their destination at English Harbour on Friday, where friends and family were present to welcome them and join them in celebration with a bottle of Antigua’s finest beer.

The gruelling Atlantic row was just one of a series of feats to be taken on by the group, however.

In April 2019, they tackled the Marathon des Sables – an ultra-marathon of 251km across the Sahara desert – followed by a cycle from Monaco to London in May. Later in the year, the Dorabros attempted a relay swim across the Channel that transformed into a relay in Dover Harbour due to inclement weather conditions.

The Dorabros - a name inspired by the dorado fish - undertook the series of challenges with an aim of raising £100,000 for the Teenage Cancer Trust, which aims to improve the experience of those with cancer aged between 13 and 24.

In an interview before setting off, Rufus told Express the charity was close to his heart, as one of his school friends, Harry Zambon, had passed away in early 2019 from a rare type of cancer.

“The Teenage Cancer Trust is the only charity that researches why teenagers get cancer,” Rufus explained. “We want to give them as much support as we can so that they can stop teenagers getting cancer.”

The boys are especially keen to support the use of 'chemo backpacks', which enable young patients to receive chemotherapy through a portable backpack, rather than on a hospital ward.

Since completing the Talisker Challenge, more donations have come flooding in, with the total on the rowing JustGiving page now standing at around £19,000.

Sharing their gratitude after completing the race, the Dorabros posted: “36 days, 10 hours and 32 minutes!!

"We couldn’t have done it without all the support from our sponsors, family and friends - Thank you.”

CLICK HERE to donate to the Dorabros’ fundraising page.

36 days, 10 hours & 32 minutes!! We couldn’t have done it without all the support from our sponsors, family & friends - Thank you @teenage_cancer #TaliskerWhiskyAtlanticChallenge #ForThoseWhoCant

Charity on the hunt for competitive athletes