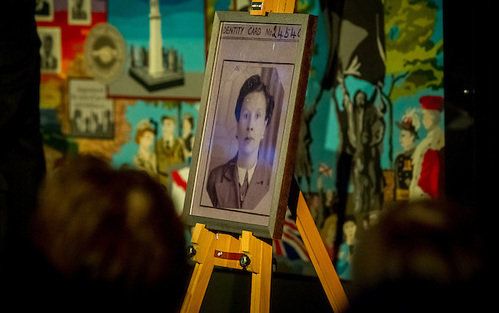 Bailiff William Bailhache led the honours on Sunday for Dorothea Weber, nee Le Brocq, who helped save the life of a Jewish woman during the German Occupation, and has now been made 'Righteous Among Nations' by the State of Israel.

An award ceremony and plaque unveiling was held for Dorothea, who died in 1993. It was attended by the Bailiff, the Lieutenant-Governor Sir John McColl and Chief Minister Ian Gorst.

The award ceremony was held at the Tapestry Museum and was followed by an unveiling ceremony at 7 West Park Avenue, Dorothea Weber's former address. 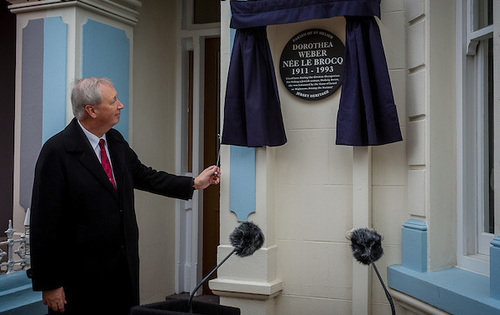 While Dorothea Weber's husband was fighting for Hitler's forces in Europe she was hiding her friend Hedwig Bercu, who was being hunted by the Germans in Nazi-controlled Jersey.

Over 70 years later Cambridge University academic Gilly Carr's research means Dorothea Weber has become only the second Channel Islander to receive the Righteous Among the Nations honour on the Yad Vashem - the Jewish living memorial to the Holocaust.

During the Occupation Dorothea shared her rations with Hedwig, who in desperation had faked her own death in a bid to escape persecution - she left a pile of clothes and a fake suicide note on St Aubin beach - although the Germans quickly regarded it as a ruse and sought to track her down.

Hedwig Bercu went into hiding after a disagreement with a lorry driver who reported her to the Germans for smuggling petrol coupons out of the office where she worked.

The Germans warned islanders they would be "liable to punishment" if they hid Hedwig and an appeal to find her was even posted in newspapers, but Dorothea Weber ignored the warnings.

At the award ceremony the Bailiff today told Islanders Dorothea Weber's heroism remains inspirational. He said: “I am pleased to welcome you all to this special award ceremony for Righteous Among Nations status for one of our Jersey women, Dorothea Weber née Le Brocq, who is being honoured by the State of Israel through Yad Vashem in recognition of her actions in hiding a Jewish woman, Hedwig Bercu, during the German Occupation. 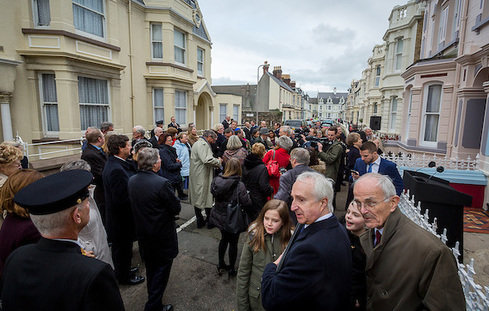 “It is a particular pleasure to welcome Dr Gilly Carr, a Fellow of St Catherine’s College Cambridge who has carried out a good deal of research and worked tirelessly to bring Mrs Weber’s heroism to the fore, enabling the recognition to take place.

“I am also very pleased to welcome Mr Pierre Landick, a second cousin of Dorothea Weber and members of Hedwig Bercu’s family – her children, Marion and Elizabeth and grandson Moritz, and her niece and nephew Zohar Ramot and Ilan Gonen.

"I would like to take you back briefly to 1939. Jersey was a small agricultural community, with some tourist trade from the United Kingdom during the summer months. Unlike today, when we have a fairly cosmopolitan society, life then was very different. There was a much stronger French influence, but the population was for the most part native born Jersey men and women and some English settlers.

"Shortly before the arrival of the Nazi forces, some had left the Island for the United Kingdom, whether returning to their families or to join the armed forces or the merchant navy. For those who were left, the arrival of those German forces presented everyday challenges which to us now are almost impossible to understand. Let me give a humdrum example - when we are stopped in the street by a stranger today and asked for directions, do any of us really refuse? It is a human reaction to be helpful.

“But then, when the person making the request was a member of the invading Nazi force, there must have been different emotions struggling beneath the surface. For many, the Nazis were simply the enemy and one did not cooperate unless there was no option. But particularly in the early years of the Occupation, the probability is that at least some people thought that Germany would win the war. Can one dare to think it, but some people perhaps identified with Hitler’s economic success in the 1930s.

“Regrettably, some may have shared his dreadful attitudes to many minorities, including especially the Jews. Fortunately, most islanders did not, and in that they were joined by some Germans who found themselves in the military, bound to serve a regime which they could not support.

“Some 260 Channel Islanders were deported to Nazi prisons and concentration camps on the continent. Of these, about one in eight died.

“Who knows how each of us would have reacted to those circumstances? That context though makes for a real explanation of why the extraordinary actions of one woman, Dorothea Weber née Le Brocq is being recognised. In Shakespeare’s Julius Caesar, Mark Anthony said of Brutus 'His life was gentle and the elements so mixed in him that nature might stand up and say to all the world, this was a man.' Adapt the quote for gender, and it meets the context of what Dorothea Le Brocq did.”